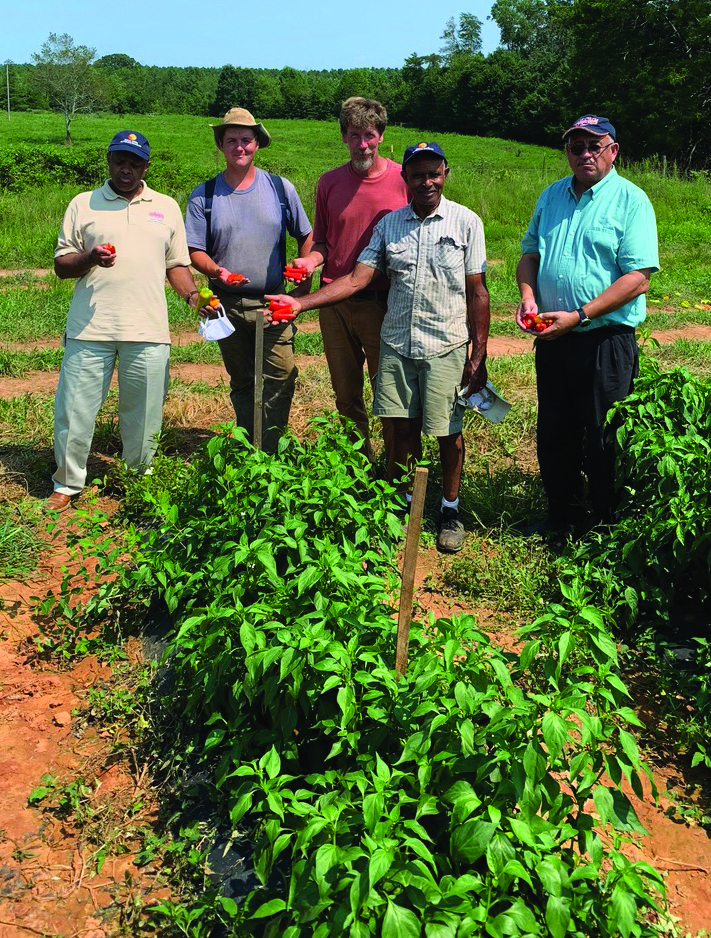 William Crutchfield, right, director of the Small Farm Outreach Program at Virginia State University in Petersburg, poses with members of the Southside Virginia Fruit and Vegetable Producers Association on Aug. 26. Crutchfield helped launched the association in 2018 to bolster small farmers in the state’s rural areas. Now the farmers serve a number of large buyers such as Food Lion. (Photo courtesy William Crutchfield)

PETERSBURG, Va. — A small group of produce farmers in central Virginia organized in 2018 to create the Southside Virginia Fruit and Vegetable Producers Association. It’s a nonprofit that promotes and expands commercial vegetable and fruit production in rural areas of the state.

By all accounts, it’s been a success. Farmers have banded together to build relationships with large buyers such as Food Lion and Produce Source Partners. They rely less on roadside sales. They’ve purchased equipment and secured a warehouse as a group to ease their job.

To pull this off, growers are charged 15 percent of the value of what they produce, which covers the cost of securing markets and delivering crops directly to buyers. After just a single growing season, the association’s gross sales are nearly $500,000 across 15 farms cultivating roughly 50 acres in five counties in the state’s Southside region.

And it started with William Crutchfield, director of the Small Farm Outreach Program at Virginia State University. The Delmarva Farmer spoke to Crutchfield last week about his work with small farms, including why it can be difficult to convince farmers to see the benefits of working communally.

How did this association start?
I reached out to the gentleman who is now the president (of the association). He and I had been talking and going back and forth. When we were able to get a small grant from USDA to see if we could set up a cluster or two of farms in the state, that was the catalyst to kick it off. Also, one of our research scientists here at the university had gotten grants from the tobacco commission in Virginia where he had purchased a lot of harvesting and planting machinery, but it was too expensive for one farmer. He got permission from the tobacco commission to pass this off to the association since they had proven that they were moving forward. It was about $250,000 worth of harvest equipment.

Why does USDA find it important to support associations like this?
The number of farmers in the country is dwindling every year. If you don’t do something to encourage them to get into farming, where are we going to find our food from in 15 or 20 years? A prime example is the pandemic we’re in now. Look at the supply chain, how the country panicked. In three to four weeks it was hard to find vegetables because of the way that the system was set up. These small farmers were the only ones that people started turning to.

You’ve spoken in the past about how it can be difficult to get farmers to work as a team. Some expressed reluctance about this initiative. Why?
Small farmers by nature are very independent. A lot of the small farmers have their own little niche markets, and they don’t want to share what they learned with other farmers. So sometimes it’s difficult to kind of break that barrier.

How were they convinced?
We got a small grant to take them to North Carolina to visit another association that had come together and had developed some additional markets for their produce. It was a two-day farm tour. This group had banded together, and they’re able to sell their produce to the larger food stores. We demonstrated to our farmer, “Hey, you can do this as well. This organization has been in existence for 10 or 15 years, and here’s where they are.” They learned and built some connections with that group and came back to Virginia, formed their own association, got chartered, licensed and were able to after grants.

What do the farmers get out of the association?
They can sell their produce to a larger market and therefore get a better price instead of sitting along the highway on a roadside stand or taking it to a farmers’ market. You can’t be a mediocre producer. Your produce has to meet the standards of the buyer. A lot of farmers don’t want to go through that process. But the association is able to buy the inputs at a discount rate than the individual farmer. They can negotiate with the fertilizer dealers, the seed companies, whomever, because they’re buying more of it. They also don’t have to look for a market. A couple of farmers in the association have gotten migrant help to come in and harvest their crop. The association has been so good to them that they’re able to hire some help. They want to increase the number of acres that they’re growing of a particular crop. Individually, it’s helped them immensely.

Once a group like this begins to succeed, what are the challenges to look out for once they’re in an association like this?
Look out for the weak link in the chain. A farmer that may sign up to plant a couple of acres of yellow squash may not be able to produce them for whatever reason. You’ve got to be ready and able to pitch in and help. We were out on a farm yesterday, and a farmer had recently planted some tomatoes, and they were trying to figure out what happened. Some of the rows were going along good, and then suddenly either animals came into the crop or it may have been something in the soil. So some of the other farmers said, “OK, we’re going to help you out here, and we’re going to meet the contract, but at the same time we’re going to do some research and have somebody come in to look at your soil to make sure it’s adaptable to growing this type of crop.” It’s a team effort.

Is there anything you’d like to add?
I just enjoy seeing a group of small farmers like these gentlemen and ladies come together not knowing each other three years ago. They did about half a million dollars in produce sales this year, and probably next year they’re going to go a million and a million and a half. I just think it’s wonderful.