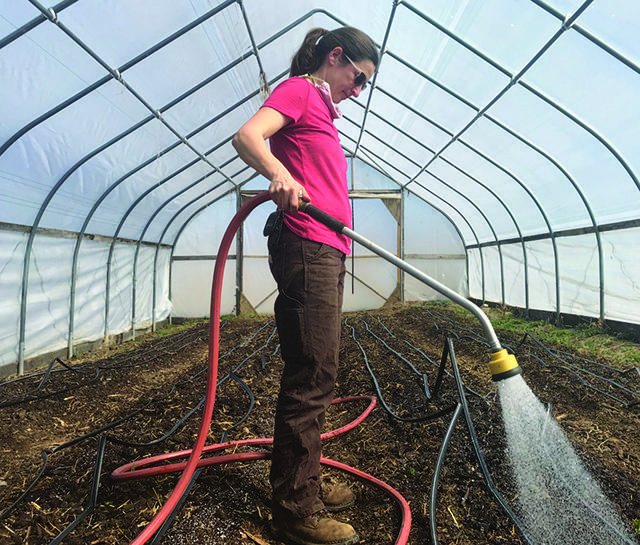 Ruth Linton said her farm, Highland Orchards, is planting as much as it can. The Wilmington, Del., fruit and vegetable operation was flooded a year ago with customers desperate for local food as the pandemic emptied shelves and made people skittish about indoor crowds. The farm’s CSA stands at about 400 members, up at least 20 percent.

“We just sort of go, ‘We’ll plant what we can and go from there,’” said Linton, the 6-acre farm’s co-owner.

Many CSA farmers across the region said they’re expanding as they prepare for the first spring planting season since COVID-19 upended the global food system, shuttering restaurants, closing businesses and confining people to their homes. Many say the virus brought a windfall of new customers, most of whom have remained.

The sudden change is pushing producers to plant more or give less to the wholesale market as they work to meet the swelling interest in local food. In preparation, Linton said Highland has erected several new high tunnels to extend the farm’s growing season and boost productivity. In them she’s growing figs, spinach, snow peas, lettuce, kale and chard, among other crops.

“It’s a big expense, but it pays off quickly,” she said.

She hired additional staff to help manage the growth. They’re putting up another high tunnel. Getting the equipment, she said, wasn’t friction-free either. Factory shutdowns from the pandemic, coupled with rising interest in high tunnels, made it difficult to get the supplies. The tunnels, which boosted productivity by about 30 percent, pair well with her hydroponic greenhouse.

“It’s astonishing the difference,” Linton said. “The hydroponic house, it’s like a 50-percent increase in productivity.”

Clagett Farm in Upper Marlboro, Md., found it more difficult to buy seeds this year, presumably due to higher demand, including farm expansions, said Carrie Vaughn, vegetable production manager. Clagett experienced the same increase in demand as other farms. It’s already sold 75 percent of its CSA shares for this season and expects to sell out by the time they start harvesting vegetables in mid-May, she said.

The vast majority of the operation remains as it did last year, but Clagett has planted more salad greens, squash, peppers, tomatoes and cucumbers. The 260-acre farm, owned and operated by the Chesapeake Bay Foundation, grows vegetables on about 20 of those, and volunteers are essential. Between 700 and 1,000 people volunteer on the farm — for most it’s a one-time thing — and COVID choked the supply of those people. As more are vaccinated and feel comfortable working together, that could change. Vaughn said she’s just glad the worst of the pandemic seems to be over.

“I don’t want to do that again. It was stressful,” she said. “It was hard on everybody, and the sort of forced distance between us, we (the employees) didn’t have the casual lunches that we usually do. It was just reduced communication among the staff. I think anytime you’re not communicating as well just makes it harder.”

Anne Geyer’s operation, Agriberry Farm and CSA, raises fruit and berries, all perennials. It makes quick expansion difficult. Nonetheless, the Hanover, Va., farm’s CSA more than doubled over the last year to more than 400 members. So, this year, Agriberry plans to sell less to wholesalers while relying on partner farms in the region. CSA members are more profitable customers anyway, she said.

The pandemic “was a wonderful challenge-tunity,” she said, chuckling.

But instead of pouring that windfall into expansion, Agriberry is holding onto its cash as it waits for a nationwide debate on the minimum wage to resolve. Geyer is committed to paying living wages to workers — mostly twentysomethings — even if it makes the farm less financially efficient.

“The people come before the products,” she said. “We’re not overly aggressive in growth right now.”

But many others are, said Claudia Raskin, chair of the Maryland Organic Food & Farming Association.

“The other people I know around here are definitely ramping up,” she said. “Maybe they’re anticipating the farmers markets will be more robust this year. I hope so.”

Raskin, who runs her own small, organic CSA in Prince George’s County, said she hired another person to help expand the farm’s offerings. It grows mixed vegetables including shiitake mushrooms, garlic and varied greens.

“A ton more planting, a ton more seedlings, and we’ll be doing a lot more picking,” she said.

But while Linton said she’s thankful her CSA’s growth paid for new high tunnels and other equipment, she’s treating the pandemic as an anomaly.

“Because I don’t count on seeing that ever again,” she said. “And honestly I hope there’s not another pandemic in my lifetime. Once was enough.”