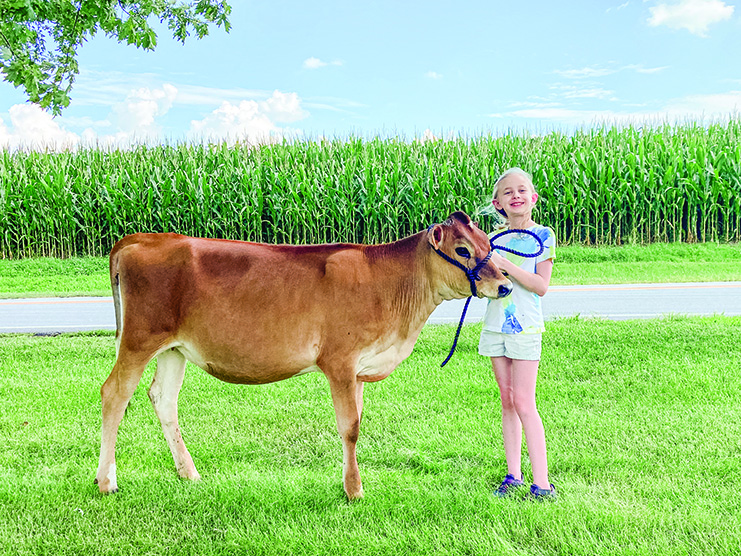 Emmalee Sanders practices with her Jersey heifer in preparation for the state fair dairy show. (Photo by Andrea Haines)

It’s been quite the year so far. The novel coronavirus, officially known as COVID-19 really put a halt to socially-thriving activity on a global level. Businesses and socially-inclined events have been at the forefront of closing their doors. Fairs and shows in multiple states around the country, have been no exception, as many made the difficult decision to cancel or postpone annual events that the public looks forward to each year.
Maryland State Fair, being a late-summer event recently announced the difficult decision to close to the public this year for safety concerns and budgeting hardships. The only other time the state fair was canceled in the fair’s 142-year history was due to World War II. As state fairs around the United States reluctantly announced closing their gates to the general public, many devised an alternative plan for the needs of their youth exhibitors, showcasing their animal entries, a long-term investment.
Operating as a junior livestock show, it is not an officially-sanctioned or supported event of the University of Maryland Extension 4-H Youth Development Program.
Youth participants exhibiting at Maryland State Fair have mixed feelings about the changes this year, but are thankful for the opportunity to show.
Emmalee Sanders, a first-year Carroll County 4-H member has her dairy heifer projects at her family’s farm in Taneytown, Md. She also will be showing dairy goats.
“I have two Jersey heifers to show this year,” Sanders said. “Lavender and Festivus are animals from my dad’s cows (San-Haven).”
Sanders isn’t a stranger to the show ring. “I have been helping ‘Uncle Ryan’ (cousin) show his cows at some of the county fairs before joining 4-H,” she said. “I showed at my county fair earlier this month and I am excited to show at the state level.”
Transitioning into a mode where most of the preparation is focused on the youth to complete independently, she said she found it a bit challenging at times.
“I can get help from my dad if I need it, but I have to do all of the washing and leading on my own,” she added. When he’s not working his day job, she said her father can often be found with a pair of clippers in hand. “My dad has been showing me how to clip. He’s a really good fitter.”
As the young exhibitor adjusts to new responsibilities, she also has a few extra protocols to keep in mind. In addition to typical show procedure, some ground rules have been set forth by the fair including, face coverings, temperature checks and having exhibitors and family answer health questionaires upon arriving at the fairgrounds.
“We have to practice social distancing,” added Sanders. “The farms are supposed to be spaced out when we move into our stalls, too.”
Overall, Sanders said she hasn’t focused negatively on the changes. “I’m just excited to show my calves. I have been working on ‘pulling throat’ and ‘setting them up’ (making them appear more conformationally appealing) for the judge.”
Following suit, getting ready for the livestock shows is Shea Cencula of Mt. Airy, Md. Cencula is a Linganore High School FFA member, and an eight-year member of the Damascus Community 4-H Club, and Frederick Goat Club. She will be exhibiting her Jersey and Holstein cattle and dairy goats at the Maryland State Fair shows. She leases her cattle projects from Johnsville Farm in Woodsboro, Md.
“Even though I don’t officially own my cattle, I have put a lot of work into them,” she said. “I work very hard throughout the year to prepare for the state and local fairs. I depend on the feedback from judges to keep improving my showing skills, and breeding (goat) methods.”
Cencula said she plans to participate in two local fairs in addition to state fair, this year.
“I began in early February, meeting my new lease animals,” she said. “For the following months, I went to the farm to visit a couple times a month. Starting at the beginning of April, my visits became more frequent, once a week leading up to June.”
Cencula said each visit ranges from two to four hours.
“Getting to know each animal, having them become more comfortable being on a halter, washing and clipping. Getting ready also meant that I needed to study information about my animals, their breed, score card for proper judging and show techniques.”
The transition to social distancing has been difficult for her, she said, just like many others.
“This year has been difficult with quarantine, but as a 4-H/FFA member, I have been able to make the best of it,” Shea said. “I have been at home to spend more time with my animals while getting schoolwork finished, utilized technology to stay connected and in a lot of ways had more time to focus on working with what I like best, my animals.”
Cencula concluded on a positive point, “Even though we are required to social distance, the fun is being able to socialize with my 4-H friends. Just being a part of showing animals together is fun, we can still clean and prepare while still maintaining the rules. Just being together is fun!”