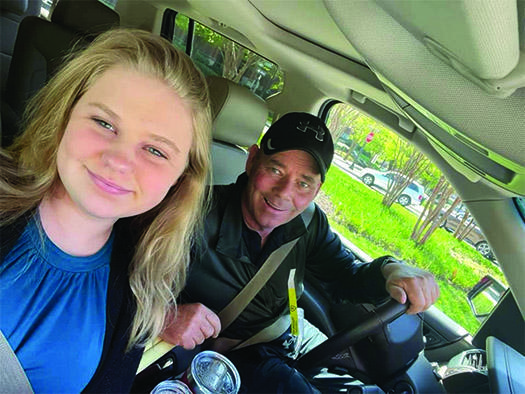 “Don’t get in her way when she makes her mind up on something,” Jeff Allen said of his daughter Devon. (Photo courtesy Jeff Allen)

BRIDGEVILLE, Del. — This fall, Jeff Allen pulled his combine out of the shed and harvested corn with it for the first time in four years.
“That was a great feeling, to be able to pick some corn,” he said.
What started for Allen as a hiatus to take care of family, recover from shoulder surgery and a host of other issues, stretched into a four-year departure from day-to-day farming.
Allen was in the midst of treatment for non-Hodgkins lymphoma, a diagnosis he received in September 2016 when he injured his shoulder and had to delay surgery until treatment was done. His father was diagnosed with prostate cancer, a longtime employee on the farm died from cancer and it all led to Allen renting his crop acres to another farmer, thinking the following year, he’d be able to manage them again.
“We thought it would be a one-year thing,” Allen said.
By August 2020, Allen was in remission for nearly four years from the lymphoma when a doctor’s visit for a periodic cholesterol check showed something off in his blood work. The lymphoma put him at a higher risk of developing a second cancer especially within the first five years of remission.
Allen went directly to Peninsula Regional Medical Center in Salisbury and after two more rounds of blood work, he was rushed to Johns Hopkins Hospital in Baltimore via ambulance.
Allen noted at that point he didn’t feel ill and even recalled helping hospital staff fix the gurney he was laying on in transport.
“I felt incredible,” he said. “I still hadn’t comprehended it.”
But at the Johns Hopkins emergency room, doctors told him his platelet count was basically zero and had he not gotten attention in the next 12 hours, he likely would have died.
“The moral of the story is you have to take your health checkups seriously,” Allen said.
Diagnosed with T-type leukemia, he immediately began 32-day course of chemotherapy and was told the best treatment would be a bone marrow transplant.
Allen’s brother had leukemia and received transplant but ultimately died in 1984. Allen said he kept reminding himself how far medical technology had come in that time.
“We’re so fortunate that we’re close to Johns Hopkins or medical facilities that could do this,” he said.
Over the next seven months, Allen spent all but 35 days at the hospital, undergoing routine blood testing, immune system checks and other treatments.
Allen’s daughter Devon, one of five of Allen’s children but his only biological child, was tested and found to be a 100-percent match for a bone marrow transplant. Had she not matched with her father, he would have had to go to the national bone marrow bank, which may have taken longer and produced a less close match.
Allen said while doctors had some hesitancy about Devon as a donor due to her age — then 13 — she was unwavering in her willingness to help.
“Don’t get in her way when she makes her mind up on something,” Allen said of Devon, who now serves as her class president at Sussex Tech High School. “She is one tough nut. Her maturity level is beyond her years.”
In preparing for the transplant, Allen went from not being allowed to have any visitors during chemotherapy to needing someone with him around-the-clock in his fragile state in the 68 days leading up to the transplant.
“The fear is if I fell, if I started bleeding, got chemo-shock, someone would be there for immediate attention,” he said.
That led to a group of about 10 friends — “warriors” he called them — to form a rotation of caregivers, staying with Allen at a Baltimore apartment and shuttling him to and from the hospital.
“It was extremely generous of them,” he said of the friends. “I wasn’t that fun to be around. I was sleeping a lot and just kind of out of it.”
In the meantime, family and friends worked at home to keep things moving along, helping to care for Allen’s parents and his kids Devon and sons Blake and Travis who were in middle school. Allen’s oldest daughter Sydney left college in Arizona to help at home.
Throughout the ordeal, Allen routinely made social media posts with updates and while the subject matter was heavy, he made it a point to stay positive and light, cracking jokes about his hair loss and other side effects.
“You’ve got to always remain positive,” he said.
Jan. 8 was transplant day and doctors drew two liters of bone marrow from Devon and slowly transplanted it into Allen.
“The hardest thing is I couldn’t be with her,” Allen recalled, but added part of her is now with him forever.
By March, Allen had recovered well-enough to move back to Bridgeville, and all his checkups since have shown positive progress.
“I’ve been extremely fortunate that I had the good friends, the good doctors and the accessibility to it,” Allen said.
Getting back in the combine this fall to harvest corn and soybeans was just the first step to possibly get back to farming. Unsure how long that could take, Allen said the years away from it allowed him to spend more time helping his family, along with fighting his own health battles.
“I dream of going back to farming, but I’ve been able to devote my time to my parents and my kids,” Allen said, adding his two sons are interested in farming.
Allen said the farm is still leased to another farmer, Jamie Stafford, who he called “a good ambassador” in taking care of the land.
Whatever the future holds for Allen, he said he’s going to stay positive, count his blessings and put it in God’s hands.
“Life was going great. Essentially God had a different plan,” Allen said. “You’ve got to have faith and follow.”