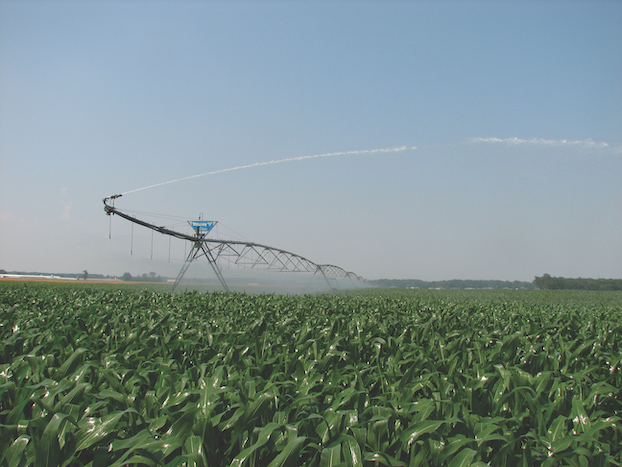 Although the majority of farmers now use electric systems, a significant number continue to rely on diesel-powered irrigation, said James Adkins, an Extension irrigation engineer. Some of those farmers in recent weeks have discussed cutting back on irrigation due to fuel costs.

“You can’t just look at the diesel prices and go, ‘Oh my God, diesel prices are huge,’ and not turn on your irrigation pump,” he said. “In a time where diesel prices are expensive, if the corn price is also higher than average, the potential is there that you can also make more money than you can on cheap diesel.”

Adkins and Nate Bruce, an Extension farm management specialist, co-authored a piece in the Extension’s Weekly Crop Update on June 17 in response to hesitant farmers. They examined diesel and corn pricing over several decades to determine whether it was prudent for farmers to dial back irrigation. Their conclusion: The cost of operation now relative to the corn price is still cheaper than it was over eight different years in the last two decades, including 2018 and 2020.

To break even in 2022 with May corn and diesel prices, the average pumping plant, which requires 1.5 gallons of diesel to irrigate one acre-inch, will need to increase corn yield by just 1.09 bushels for each inch of water applied, the report said.
Over two decades, seasonal irrigation demand for corn in the region has run 9 acre-inches or 9.81 bushels of corn to break even with the current cost of diesel.

“Cutting down on irrigation due to diesel prices is not a production area to consider cutting back on in 2022,” the report said.

Diesel pricing, however, may only be an indirect reason for farmers considering irrigation reductions, said David Marvel, who raises grain on about 1,000 acres in Harrington. Due to recent price unpredictability, he said, farmers may purchase less fuel at a time than they have in the past and consequently may have less on hand. With recent rains, that hasn’t been an issue for Marvel, but many factors could change that.

He said he typically stores up to 5,000 gallons of diesel on his farm. He currently has a fraction of that.

“As of right now (farmers) can get what they want. But as things change around the world, in the summer, that definitely could change,” he said. “It’s not a problem now; it’s always in the back of our mind.”

If anything, he said, the cost of fuel could push diesel-powered irrigators into new electric systems — a solution with its own complications. He said in some cases it’s not easy to get equipment such as controller boxes from China due to persistent supply chain issues. Farmers on electric systems are also at the mercy of electricity providers, who have the ability to shut off access to irrigators during periods of high demand.

“People normally have a diesel backup anyway because your vegetable crop is not going to forgive you missing that water,” Marvel said.

The cost difference, however, is notable. The Extension’s report said that the average electric system operated at roughly half the operating cost of a diesel-powered system depending on the electricity provider’s cost structure.