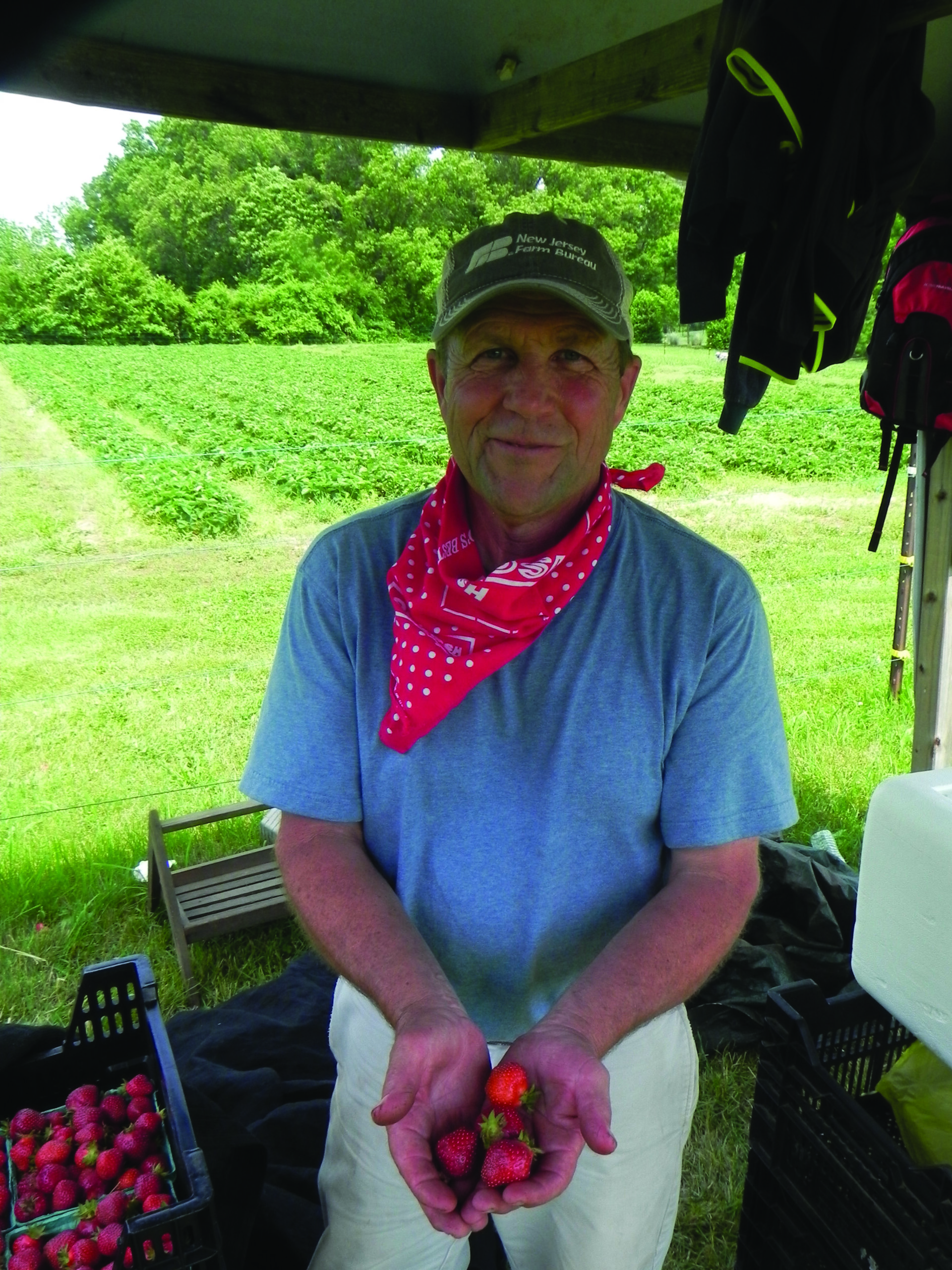 This year’s strawberries crop seemed to have a more tart flavor, Gary DeFelice said, attributing the taste to excessive rain and near-freezing temperatures in April. (Photo by Richard Skelly)

MIDDLETOWN — Gary DeFelice, recently retired from the New Jersey Turnpike Authority, has carefully focused his farming operations over the years so he can concentrate on Christmas trees and strawberries.
The first Saturday in June, one car after another pulled up to his well-situated farm stand on Red Hill Road, minutes from the busy Garden State Parkway.
“My grandmother gave my parents a piece of land and I grew up on a piece of property right here on Red Hill Road,” he said. DeFelice studied ornamental horticulture at Delaware Valley College in Doylestown, Pa.
While his grandparents farmed 150 acres, Cedar Hill Farm is now down to just 17 acres, he explained from the air conditioned comfort of his pickup truck.
“In order to settle a family partnership we had to sell off a piece from the 76 acres I grew up on,” he said, noting his relatives raised peaches and apples on the bigger property.
“I was in talks with the township open space committee and they were going to purchase and preserve the remaining 32 acres,” he said. But that deal fell through.
Large houses loom a few hundred yards away from his strawberry patches, “but the neighbors are all very good, we’re doing strawberries and hay and I respect their privacy,” he said, noting he doesn’t run tractors — or have the need to — early in the morning.
DeFelice and his mother Agnes and a small crew grow their strawberry crop on just 1.5 acres of land. The rest of his 17-acre property is devoted to raising the more than 1,000 Christmas trees he sells each winter.
Most of his clientele are aware of the seasonal nature of strawberries, and each year the arrival of fresh picked strawberries. The cars begin lining up for his 2 p.m. opening hour at the stand, where his mother Agnes can be found most days.
“My uncle used to say the strawberries always paid the spray bill for the trees, peaches and apples,” he recalled, “and if you want a clean fruit, you have to spray. Over time, we did some minimal input of spraying here in the strawberry fields and as we got away from it, the flavor got better.”
“We’re not organic, because I use some synthetic fertilizer, so we don’t say we’re organic but we do say we are pesticide-free,” he said, noting there’s a lot of labor involved in weeding. The tradeoff is he doesn’t have a spray bill.
After graduating from Delaware Valley in 1983, he took a job in Yardley, Pa., and did ornamental landscaping work all over the East Coast.
“But my heart was back here at the family farm so then I was able to take a job with the Turnpike Authority.” He added it was the luxury of his job with the Turnpike Authority that has allowed him over the years to be as involved as he in advocacy roles with the Monmouth County Board of Agriculture, the State Board of Agriculture and the New Jersey Farm Bureau.
DeFelice said strawberry stand is open every day of strawberry season, usually from late May to mid- or late-June, depending on weather.
“In general, each year, if we get four full weeks of strawberries, we’re lucky. We do all matted rows, no plastic, and traditionally our season runs from around May 25 to June 20.”
This year’s crop seemed to have a more tart flavor, DeFelice said, and attributed the taste to excessive rain and near freezing temperatures some nights in April.
He noted until this year, the Cedar Hill Farm stand would open at noon. They pushed it back to a 2 p.m. opening each day earlier this year and it’s worked out okay.
“On Saturdays and Sundays there’s often dozens of cars pulling up in the driveway just before 2 p.m.,” he said.
DeFelice’s mother Agnes, 90, likes to be out at the strawberry stand enjoying fresh air and chatting up customers, while his niece Jillian DeFelice and Brook Levins, a neighbor, also help out on weekends.
“The problem when we were opening up at noon is we were selling out by 2 p.m., and we’d have to close up and restock,” he said.