Del. Junior Fair Board: ‘We lend a helping hand’ 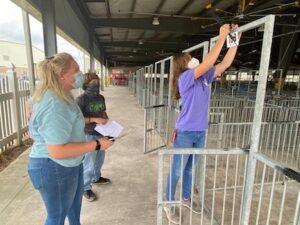 HARRINGTON, Del. — When you hear that there’s a Junior Fair Board for the Delaware State Fair, you might picture young people learning to sit around a table in a board room to discuss things. That is not the case. While Junior Board members can and do make recommendations to the Senior Board regarding any facet of fair operations, the 12 members are mostly hands-on volunteers at the fair. The 16- to 21-year-olds are selected for a two-year term.

The purpose of the Junior Board is “to develop leadership and interpersonal skills of youth and to expand the Delaware State Fair’s volunteer base while increasing visibility and impact of the fair.”

Members represent each of Delaware’s three counties and all facets of interest in the fair, including 4-H, FFA, entertainment, exhibits, even marketing and publicity.

Betsy Morris, who has been leader and advisor since the Junior Board started in 1999, thinks of the youth as a “farm team” who are exposed to various aspects of the fair, especially behind-the-scenes aspects of what it takes to put on the fair.

“We make selections from applicants from all over the state, but it mostly comes back to those ‘born and raised’ at the fair,” Morris said.

Junior Board members commit to 30 hours of volunteer service, Morris said. “Most can easily do that. They are involved in a lot of set up and events during the fair. It varies from year to year how these volunteers are used, depending on current needs.”

Some jobs they’ve been doing since the program started: helping with the ice cream contest, announcing at livestock shows and organizing young exhibitors for shows. There’s a whole spread sheet of what they do to get their hours in, Morris continued.

Junior Board President Leslie Webb said the group had met early in July to go over the spreadsheet to make sure all the hours and needs were covered.

“We are required to put in 10 hours before the fair, during set up,” Webb said. “We check campers in, help with food vendors so they know where to go, and when the judges are judging exhibits, we help by attaching ribbons and arranging displays.”

During the fair, the volunteers serve 20 hours more in any department that requests help. For example, on Food Bank promotional day, they will help set up and clean up — “and do a lot of heavy lifting,” Webb said.

Webb’s first year on the board was during the pandemic, when there was less happening at the fair and fewer volunteer opportunities.

“That shouldn’t be a problem this year,” the Greenwood resident said. “We’ll be pretty much back to normal.”

A graduate of Lake Forest High School, she is a student at the University of Delaware where she is studying environmental engineering while continuing her 4-H and FFA involvement.

Webb’s brother, Leighton, is serving his first year on the board. He is a junior at Lake Forest and a member of FFA and the Peach Blossom 4-H Club. Their mother, Elaine Webb, is co-advisor of the Junior Board.

The Webbs camp on the grounds during the fair, even though they live only 15 minutes from Harrington. Leslie leases dairy heifers from a nearby farm to show at the fair, as she has done since she was 10. Leighton has competed in tractor driving, woodworking, wildlife judging and other events.

Leighton said the Junior Board mainly “helps make sure things go smoothly before and during the fair. We lend a helping hand.”

This year, he said, the Junior Board has added something new. They’re making videos for social media, for example, with carnival and food vendors, to be featured on Instagram or Facebook.

This is the second year on the board for Hannah J. Davis of Milford. A senior at Lake Forest, she has shown dairy, sheep and horses at the fair. The horse is her own; the other animals are leased. Davis said she plans to attend Virginia Tech to pursue a major in animal science, with a goal of becoming a veterinarian.

“On the board I do a lot of volunteering. I help with marketing, animal processing, setting up fair pens. I help make sure things run smooth so that kids can get in and out and get the show done,” she said.

“I decided I wanted to join because I want to help the fair sustain agriculture by helping younger children gain an interest in agriculture,” she said.

This is also the second year for Jenna Anger, a sophomore at the University of Alabama majoring in biology and environmental science under pre-dental with a minor in Spanish. Anger went to Alabama with 27 college credits and enough scholarship funding that all she had to pay was room and board. She has also done several internships and this year is an intern for Delaware 4-H, so she is busy at the fair with that also.

“I’ve been involved with the fair since I was little,” Anger said. “I started in 4-H, then FFA. I entered the children’s department, flower, culinary…. Livestock has been a big part of my experience with the fair. It has always been a place I can enjoy with family and friends. It has just been nice to give back, and to learn about the logistics of the fair.”

Morris said applications to serve on next year’s board will be made available after the fair, but anyone interested may email her at betsym@udel.edu.

“Delaware was one of the few states that held a fair last year,” Morris noted. “This year’s fair will be back to normal for the most part, with some exceptions. When we were planning back in January 2020, we decided to split the livestock shows — dairy for the first half of the fair and beef cattle the second — and we will do the same this year. Next year, all the animals will probably stay.

“We’re not having a nightly parade again this year. The grandstand shows had to be redone several times and we had to go with a smaller capacity. At this point we could go back to full capacity, but it’s too late in the process. Hopefully, next year will be normal.”