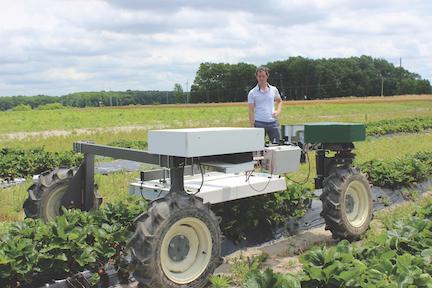 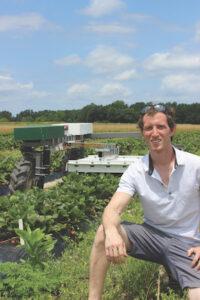 Adam Stager, founder of TRIC Robotics, designed an autonoums robot that uses ultraviolet light to contol insects and disease in strawberries instead of chemical pesticides with the goal of making an impact on people’s lives. Photo by Sean Clougherty

GEORGETOWN, Del. — Strawberries are a popular crop on many produce farms, jump-starting the season locally. Nationally, it’s the third biggest crop in the fruit and nut sector.

For most widely-grown crops, insects and disease can be a problem. USDA researchers estimate pesticide applications for strawberries through the season at about $500 per acre.

A Delaware-based company, partnering with local and federal researchers, is working toward a solution with robotics and non-chemical pesticide alternatives to protect strawberry fields.

TRIC Robotics, founded by Adam Stager while he was a doctoral candidate at the University of Delaware, uses a custom-designed robot and a specific type of ultraviolet light to reduce the need for chemical pesticides.

Designed to run autonomously at night, the robot creeps up and down strawberry beds, shining UV-C light on the plants. The USDA-developed light technology, called PhylloLux, disrupts the DNA of microorganisms, stopping them from reproducing.

Operating the robot at night is important for multiple reasons. Worker safety plays a part as direct lengthy exposure to the light can be harmful. According to the USDA researchers, lead by Dr. Fumiomi Takeda, Research Horticulturist, a dark period after irradiation prevents activation of a daylight-induced mechanism that repairs DNA damage in microbes and allows for much shorter UV-C irradiation times. Shorter times in the field means a lower dose and puts less stress on the plants, too.

UV-C light is routinely used to kill microorganisms in the sterilization of air in hospitals, water treatments, laboratory benches, and the treatment of meat and poultry products.

“The use of UV light in crop production has been limited because the doses required to kill plant pathogens usually cause plant damage, such as leaf and flower burns and defoliation,” Takeda said in a USDA blog. “Our research has been to develop UV-C treatment methods that have high efficacy for disease and pest control without damaging plants and are cost effective.”

Stager and his team at TRIC talked with growers in building the robot, working to keep it as simple and light as possible.

After TRIC presented its project at the 2020 North American Strawberry Association annual convention, Stanger said the response from growers was encouraging.

TRIC did its first trials in 2020 on two Delaware fields including one at UD’s Carvel Research and Education Center and at the USDA research center in Kearneysville, W.Va., and this year, with grant funding from the National Science Foundation, added two trials in California for a wider data set.

Stager said preliminary results have shown effectiveness in controlling gray mold and spider mites. One site also showed an early yield increase versus a nearby non-irradiated field. Trials are also looking at control of other pests including powdery mildew, anthracnose, aphids, thrips, scale insects and slugs. They will also vary robot speed, light intensity and other operation factors to build a data set for more effective control, he added and work with other sensing tools to gather data for blossom counts which could provide the capability for yield estimates.

A grant from USDA’s Sustainable Agriculture Research and Education program continues to pair Takeda and TRIC to further develop the robot and light technology to make it workable for small-scale growers in the Northeast. Through the grant, a stakeholder advisory panel will be formed comprised of strawberry growers and Extension personnel from the region to guide the project.

Stager said though he came to the project from the robotics side, it’s the UV-C light that needs the most attention to make the product ready commercially.

“It’s kind of interesting because I’m a roboticist but we’re not doing much robotics anymore. We’re doing a lot more on perfecting the UV-C use,” he said. “That dosing control is so so critical. There’s a lot more to it than holding lights.”

For Stager, who traces this work back to building things as a kid in his grandfather’s woodworking shop, building something impactful was a key part of starting his own company. By reducing pesticide use and helping farmers grow better crops, the strawberry robot project looks to do that, he said.

“I wanted to make a big impact and feeding people is somewhere where you can make an impact,” Stager said. “We’re really almost at that pivot point where this is about to take off.”