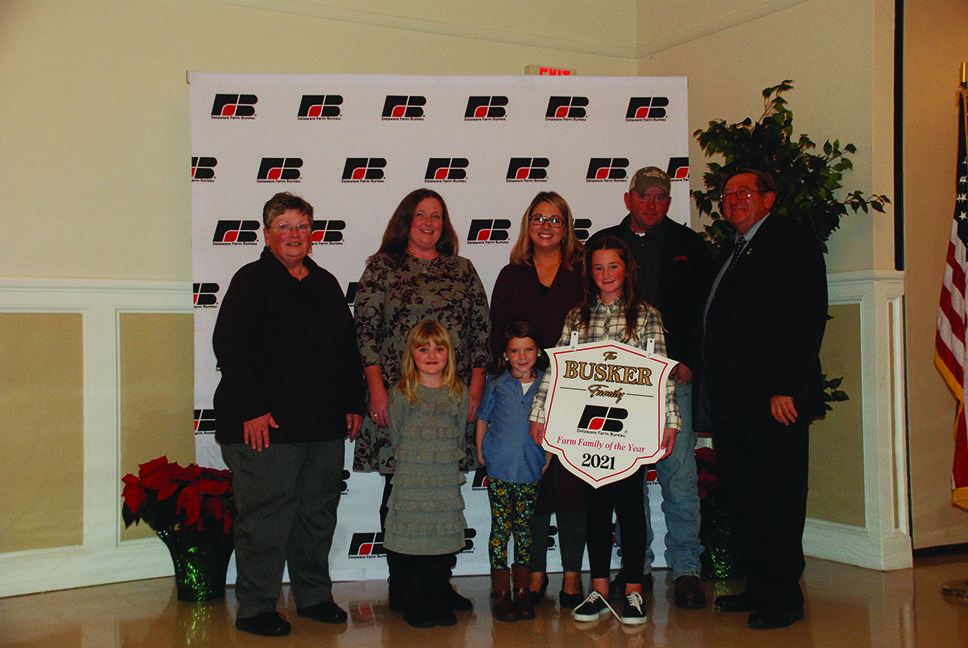 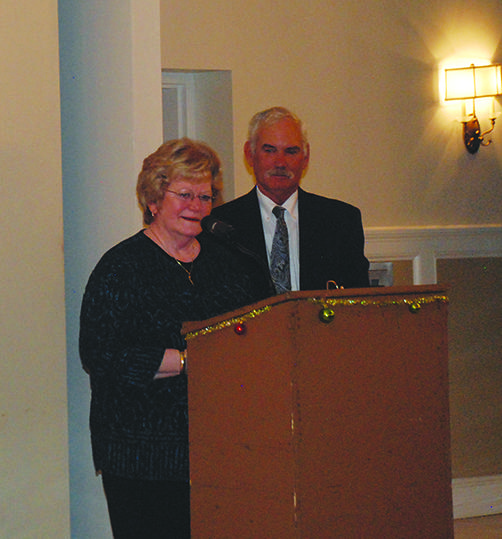 Michael Scuse, right, Delaware Secretary of Agriculture, presented the Delaware Farm Bureau’s Distinguished Service to Agriculture Award to Katherine “Kitty” Holtz, who was the organization’s first female president and has been an staunch supporter of farmers in the First State. At top, The Busker family of Harrington was honored as Delaware Farm Bureau’s Farm Family of the Year at the organization’s annual banquet Dec. 4. On hand for the presentation were, from left, Carmayne Busker, Sara Busker with her daughter Sophie Rager, Ann and Philip Busker with their daughters, Gracie and Karley, and DFB President Richard Wilkins. (Photos by Carol Kinsley)

DOVER, Del. — One of the highlights of the Delaware Farm Bureau “Celebration of Harvest Banquet” held on Dec. 4 was the spirited performance by Delaware Ag Secretary Michael Scuse as he helped auctioneer J.T. Robbins, vice chair of the Young Farmers and Ranchers, raise money for the YF&R and the Delaware Farm Bureau Foundation.
Scuse even offered his own pocket money at times to help increase a bid. In the end, the YF&R was able to add $7,000 to its scholarship fund.
YF&R also held a silent auction, and Nationwide matched the proceeds from that with a $1,000 donation.
Margie Chase, Nationwide sponsorship relations account executive for the last 14 years, is retiring after 35 years with the insurance company.
She received a basket of goodies and was honored with YF&R’s Supporter of the Year Award.
“I have a very special place in my heart for young farmers, FFA and 4-H,” Chase said.
YF&R Member of the Year was Casey Collier.
The Busker family of Jenamy Farm LLC in Harrington was named Delaware Farm Bureau’s Farm Family of the Year. Jenamy Farm was begun in 1979 by Chuck and Charmayne Busker. The operation has grown to a milking herd of 260 with an equal number of young stock and 775 tillable acres.
Charmayne, CFO of the farm, worked with Farm Credit for 30 years. She holds an honorary state FFA degree, was inducted into Delaware 4-H Hall of Fame in 2018, was awarded the Joy G. Sparks Award in 2013 and Delaware Holstein Association’s Distinguished Service Award in 2006.
In 1981 the Buskers hosted the first annual Delaware Cow Camp at their farm.
In 2001 it was reinvented as an overnight event at the fairgrounds with up to 60 youngsters and their calves “camping out” and participating in a variety of educational workshops. The entire family is involved in this event, funded by an endowment in the Delaware 4-H Foundation created by family and friends in memory of Chuck, who died in 2007.
Both the Buskers’ children attended the University of Delaware and both received the American FFA Degree. Philip is now the COO of the family farm. Sara is operations assistant at the Delaware Ag Museum, a 4-H volunteer and a member of the Delaware Dairy Princess Committee.
Philip and his wife, Ann, have two children, Karley and Gracie, and Sara has a daughter, Sophie Rager.
Charmayne said being named Farm Family of the Year would have really touched Chuck. “He was the Farm Bureau member. He made it happen,” she said.
Winner of the DFB’s Distinguished Service to Agriculture Award was Katherine (Kitty) Holtz of Clayton, former Kent County Farm Bureau President and the first female president of the state Farm Bureau. She was introduced by Scuse who said all three county honorees were very deserving and should be commended for the work they have done.
Holtz and her husband, David, have operated a grain farming business in Delaware since 1969. Kitty has been active in Farm Bureau since 2003 and volunteered for 10 years as assistant organizational leader for 4-H. In addition, she has served on a dozen or more ag committees. She has continuously impacted the ag industry in a positive way by promoting the need for agriculture to have a seat at the table of discussion on any issue that can have a negative impact on agriculture.
Holtz said, “The real winner is Delaware agriculture.” She encouraged all farmers to be a voice for agriculture.
Carey Insurance Group and Jules Hendrix, representing Crow Insurance Agency, received plaques “for dedicated service to the Delaware Farm Bureau and all Delaware farm families.”
Georgie Cartanza, who served as emcee, wrapped up the evening by urging everyone to “take time to reach out to one another. Your presence is a gift, especially with your children.”