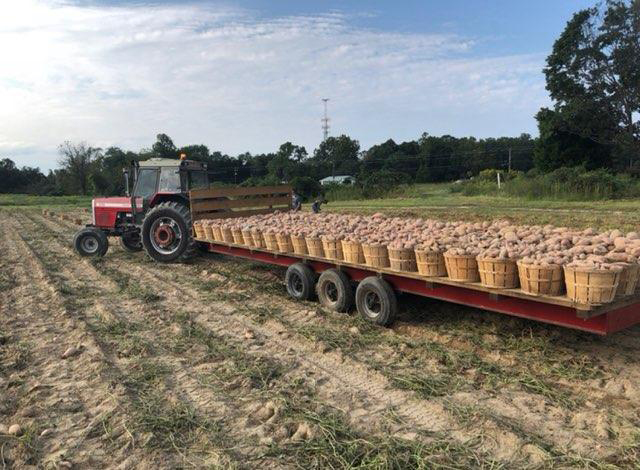 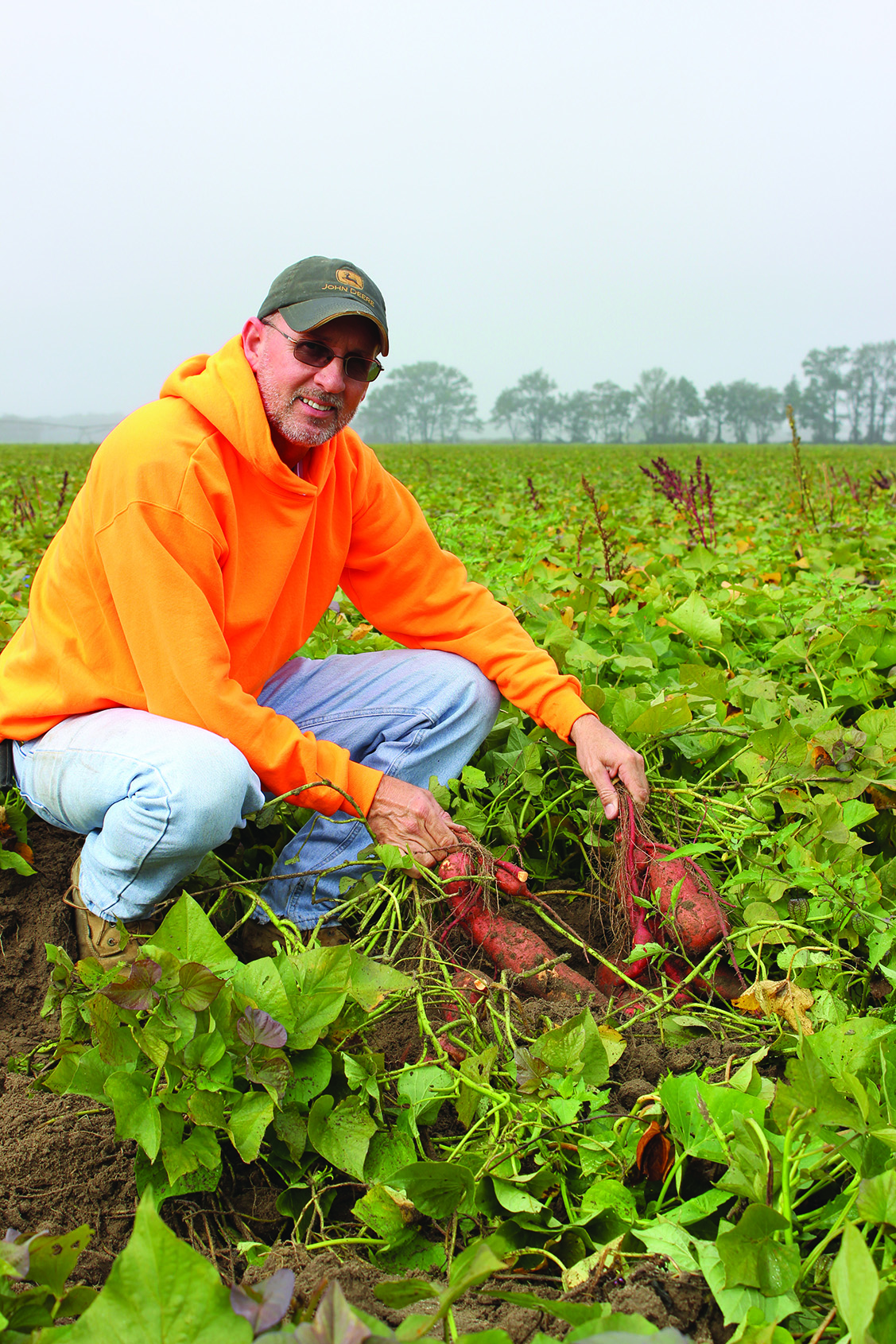 Laurel, Del., farmer Jay Rider said growing sweet potatoes for processing the last few years has helped diversify his operation as well as revive a crop on the farm that was grown decades ago. (Photo by Sean Clougherty)

LAUREL, Del. — When Jerry Rider and son Jay were considering growing sweet potatoes for a processing contract a few years ago, a small but notable factor in the decision was a four-row transplanter that was still in the shed.
It arrived new on the farm in the 1940s when sweet potatoes were a large part of the family operation.
“Identical,” said Jay Rider comparing it to newer models. “They’ve still got the same parts. It’s still going.”
As a crop in the region, sweet potatoes are still going, too, and while it’s on a much smaller scale then when canneries dotted the Delmarva Peninsula decades ago, a small resurgence in recent years has supported many small-scale growers with fresh market sales and a few larger growers contracting with a processor.
USDA Ag Census data show an increase in both farms and acres growing sweet potatoes in Delaware, Maryland and Virginia.
Delaware saw the number of farms growing the crop go from seven farms to 12 with acreage increasing from 20 to 82 between the 2012 and 2017 census.
Maryland farms growing sweet potatoes increased from 52 to 124 and acres rose from 75 to 141 and Virginia increased from 120 farms to 269 farms with acres rising from 136 to 286 over the same time period
Contrast that from the number of farms and acreage reported in the 1950 Census of Agriculture with Delaware at 1,065 farms and 1,364 acres; Maryland at 4,272 farms and 5,999 acres and Virginia at 44,027 farms and 13,424 acres.
Dr. Gordon Johnson, University of Delaware Extension fruit and vegetable specialist, said two main drivers in the current market are the public’s rediscovery of the healthfulness of sweet potatoes that has led to more value-added products on grocery store shelves and restaurant menus and states with large production like North Carolina have increased sweet potato exports, making a little more room in the fresh market for smaller growers.
“It’s always been a profitable crop for small growers,” Johnson said. “There’s a good local market and what I’ll call local wholesale, all the farm markets and roadside stands. I think it’s definitely going to hold steady.”
He added it’s a good fit for small-scale growers with relative low input costs and equipment needs, some tolerance of dry conditions, a wide harvest window and the ability to store the crop after it’s cured.
On the small scale, “it’s a lot of hand work,” he added, “but what vegetable isn’t?”
At Buckler’s Sweet Potato Farm in Mechanicsville, Md., T.W. Buckler said the work on their three acres of Bellevue and Bonita varieties is paying off well this year.
Sales began in late September and would normally go to the end of November.
“This year has been unreal,” he said. “We’ll be sold out by October’s end.”
With his father Wayne Buckler selling six days a week from a loaded custom-built wagon along the Southern Maryland roadside, T.W. said concern surrounding the coronavirus is likely pushing sales at almost twice the rate of previous years.
Some customers are still reluctant to go into grocery stores and others are looking to stock up in the instance of a second wave of the virus.
He said his family had for many years planted a few thousand sweet potato plants as “something to do” between harvesting and stripping tobacco.
But after taking the tobacco buyout in the early 2000s, their planting more than doubled.
“That’s the main crop for my father and myself,” T.W. who works full-time off the farm said, adding they also grow cabbage, kale and turnips.
In Southwest Virginia, production has held steady over the last 20 years, Roy Flanagan, Virginia Beach agriculture and natural resources agent and sweet potato grower said.
The growers in and around Virginia Beach serve local retail customers leading up to Thanksgiving and Christmas holidays.
“It’s an additional sale for holiday dinners and holiday traditions,” Flanagan sad. “That demand hasn’t changed like has for the chips and the fries and things like that.”
Johnson said most small growers plant between half an acre and 5 acres.
To increase beyond that, growers would need to invest in harvesting, grading and packing equipment to stay efficient and viable.
“That’s a big step,” Johnson said.
For the Riders, Jay said their experience growing other processing vegetable crops and focus on crop diversification made sweet potatoes attractive again.
Irrigation on their sandy Sussex County soil helps manage risk as well.
“It was also entertaining and interesting to get back to something that had been grown on the farm years ago,” Jay Rider said.
Prior to stopping production in the late 1970s, Jerry Rider said growing sweet potatoes started in the spring with raising spouts to transplant, cultivating the crop through the summer and harvesting, grading and hauling in the winter.
“Sweet potatoes were a year-round job,” Jerry said. “Back then we had help we had to keep year-round.”
Back then, they also had several cannery options to take what didn’t make the fresh market grade, but “when the canning houses closed, we closed,” he added.
For the last five years, the Riders have partnered with Wicomico County farmer Charles Wright to grow more than 100 acres for one processor, Hanover Foods.
Wright said he also has separate acres for wholesale fresh market sales.
“It works with us,” Wright said. “You’ve got time with them.”
T.W. Buckler said he would consider growing more if land with a light soil type conducive to growing the crop became available near him.
When they were planting at the end of May this year, they took the chance on increasing slightly after seeing a huge spike in people searching for locally-grown food in the spring.
“It worked out,” he said. “It was a gamble worth taking.”