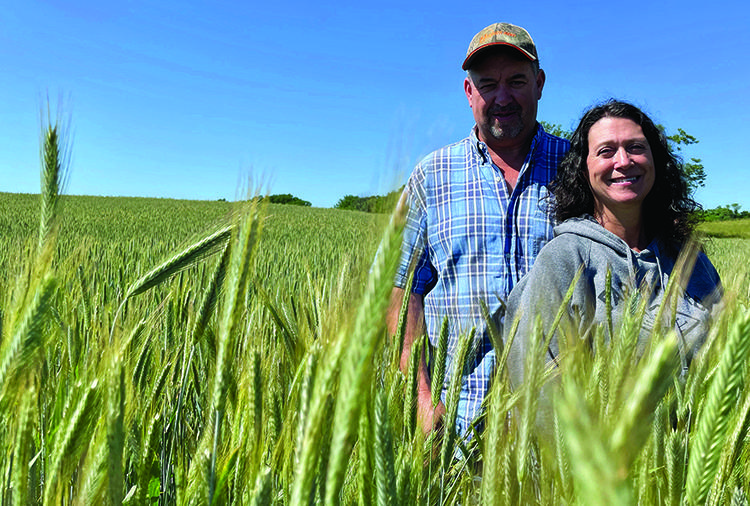 Ricky and Leslie Bauer have been raising rye for Sagamore Spirit, a Baltimore whiskey distillery, since 2018. The company is in the process of releasing a special Maryland whiskey made entirely with grain grown in the state. (Photo by Jonathan Cribbs)

DAYTON, Md. — Ricky and Leslie Bauer have been growing a new crop at Rural Rhythm Farm for a single client since 2018. Over several seasons, it’s been raised, treated, harvested, stored and then trucked to Baltimore for processing. Eventually, they expect to see the ultimate payoff — a product on store shelves available to eager consumers for purchase.

Until then, they produce each season and they wait.

The Bauers are one of a small group of Maryland grain producers working with Sagamore Spirit, a Baltimore rye whiskey distillery. The partnerships serve the distillery’s goal of reconnecting Maryland’s grain industry with the state’s forgotten history as a notable rye whiskey producer. Sagamore is currently aging a limited Maryland whiskey in wooden barrels of oak — a five-year process that could end soon, said Max Hames, Sagamore’s distillery operations manager. Maryland-raised rye is the key ingredient.

“We’re trying to build the infrastructure to support this long-term,” he said. “It’s a tenacious crop. I think it grows exceptionally well in a lot of places, but I think we do get that Maryland terroir by growing it here.”

The Bauers were recruited in 2018 by Chris Weaver, a fellow rye farmer in Westminster, Md., who had already linked up with Sagamore through the University of Maryland Extension. Ricky and Leslie Bauer saw rye as a way to further diversify their Howard County operation and cut their soybean acreage, thereby reducing deer damage. Ricky Bauer had noticed that bearded — or bristled — grains, such as rye, were less appealing to the area’s large population of white-tailed deer, possibly, he said, because it irritates their noses.

“It was funny. A couple of years ago I actually ran out of wheat, and I went out and bought a couple of bags to finish a field,” he said. “And those deer walked the road… near where we changed the variety, and the damage was 90 percent worse where the non-bearded was than the bearded.”

Rural Rhythm Farm is growing about 200 acres of rye for Sagamore after initially agreeing to raise 84 in 2018. With acreage from Weaver as well as Sagamore’s own farm in Baltimore County, the company is growing more than 250 acres in Maryland. (Natalie Ziegler, an Ellicott City, Md., farmer, is also growing for Sagamore.)

“(Sagamore) has been so thrilled with our Maryland product that… they would like to see us double our acreage, which we’re not going to be able to do,” he said. “We’re going to have to find more farmers to come into it. But what they have found is that our Maryland product has been 99 percent superior to what they can get out of Canada or the Midwest.”

Producing that kind of quality required a significant learning curve that continues to this day, Leslie Bauer said. The crop, planted in October and harvested in mid-July, is needy; this year, the Bauers have sprayed four times already.

“It’s not a cheap crop to raise,” she said. “A lot of chemicals that we would use on our other grain operations are not labeled for use on rye, which means that we can’t always go to the toolbox and use those same chemicals when we’re needing to look at alternatives.”

For instance, weed control that could be used on, say, oats or triticale could also be used on rye — if the chemical was labeled for it, Ricky Bauer said. It isn’t, however, because the market for rye has always been too small for chemical companies to get their products labeled for the crop, and Sagamore Spirit is a stickler for honoring labels, he said.

The Bauers have also experimented with seeding rates while trying to prevent lodging, which has been a struggle. They’ve dialed back the rate from 1.2 million seeds per acre to just 1 million this year, he said. Brian Butler at the University of Maryland Extension has experimented with halving the seeding rate while doubling the nitrogen, but Ricky Bauer said he feared that could hamper yield and weed control and hasn’t yet followed suit. They also applied a growth regulator this year to reduce lodging within the chest-high crop. Sagamore had been against the idea in previous years out of concern that a regulator would boost the crop’s protein, which can create a sticky mash that disrupts fermentation. Field research by the Extension suggests that may not be the case.

“The story’s still untold. Will it help it stand?” Ricky Bauer said. “We shall see when it comes time to harvest.”

Sagamore also helped the Bauers build storage on the farm to not only receive their rye crop but others growing for the distillery as well. The yield is generally 65-70 bushels per acre, Hames said.

“We’re less concerned with the yield of the crop and more about the quality of the grain,” he said.

Maryland rye will be used to a degree in many Sagamore whiskeys, but its spicy characteristics, including flavors such as cinnamon, clove and nutmeg, are particularly important to the distillery’s upcoming Maryland whiskey.

“It’s getting to the point where we would consider releasing or previewing it,” Hames said. “I would say that it’s a young whiskey. As of now, it’s immature but really shining with those fruit and floral notes that we’re after.”

Sagamore Spirit was founded in 2013 by billionaire Under Armour CEO Kevin Plank and Bill McDermond. The goal was to reignite Maryland’s whiskey tradition. One-third of the nation’s rye whiskey supply was held in Maryland in 1933, according to the distillery, but World War II brought that to an end. The state’s distilleries began producing ethanol to supplement the military’s fuel supply. After the war, federal corn subsidies and the crop’s simpler harvest killed most of the state’s rye acreage. The whiskey disappeared with it.

It produces a series of popular whiskies and canned cocktails and features a 6,000-gallon mash cooker, several similarly sized fermenting tanks and a giant copper still. The whiskey is diluted to 120 proof with limestone-filtered water from historic Sagamore Farms, a storied horse-breeding operation also owned by Plank.

Weaver said he appreciates Sagamore’s commitment to a high-quality crop.

“It’s just a great relationship back and forth because neither of us want to do a bad job,” he said. “Nobody wants to cut any corners. It’s a fun, different project where you can watch what you grow turn into an end product.”

Eventually the distillery hopes to produce several hundred barrels of Maryland whiskey each year. (A single barrel is equal to 53 gallons or 220 bottles. The company’s flagship whiskey retails for about $40 a bottle.) The whiskey ages in the oak barrels, which purposely leak to oxygenate it as it absorbs the barrel’s wood sugars, Hames said.

“It’s really a wonderful process, except for losing a lot of whiskey,” he said, laughing. “But, hey, that’s part of it.”

There’s one significant drawback for Ricky Bauer: the harvest, which is fast approaching.

“At harvest time it’s the most miserable crop that you ever want to deal with,” he said. “It’s black, it’s itchier (due to the crop’s beard) than anything we’ve ever harvested, and I’m so glad when it’s over.”

But Rural Rhythm Farm’s association with Sagamore plays well with an audience. The Bauers’ daughter was married in the fall and one of the wedding’s signature drinks was a Sagamore whiskey.

“Everybody thought it was so cool because they were at a wedding on a farm that grows the rye for Sagamore, and while it wasn’t the rye that was in that whiskey, it was a neat thing,” Leslie Bauer said.

If there’s ever another wedding — in a year’s time, perhaps — maybe they’ll be able to serve the real thing — and taste the ground they’re standing on.