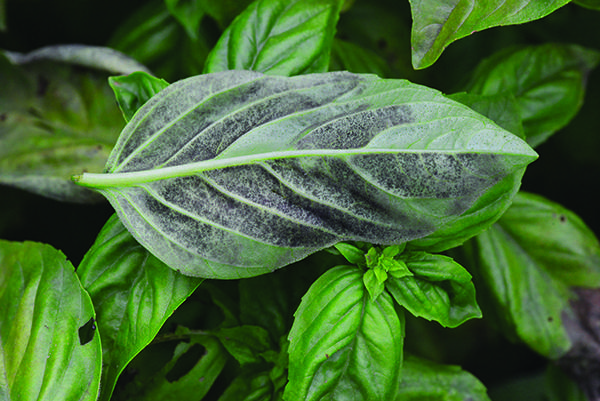 The downy mildew spreads rapidly on basil in humid, wet weather, and is mostly a problem later in the summer. (Photo courtesy Chelsey MacBride-Gill)

Downy mildew, Peronospora belbahrii, is a major disease on basil plants.
First reported in the 1930s in Africa, downy mildew has since spread to new continents.
In 2007 it was first reported in the United States, found in south Florida.
By the following year it was reported in greenhouses and field-grown crops and home gardens throughout the eastern U.S. and Canada, and by 2012 it was reported in the Midwest.
The downy mildew spreads rapidly in humid, wet weather, and is mostly a problem later in the summer.
Early in the infection the plant’s leaves have a yellowish color, like a nutritional deficiency, starting along the major leaf veins.
As the disease spreads, the undersides of leaves show the fuzzy gray-colored sporangia, where spores are formed.
Later, this causes the affected areas to turn brown and die.
The disease can decimate a basil crop, usually in late summer to early fall, ending the plant’s life rapidly.
Basil is one of the most popular summer annuals for commercial and home production, but not all cultivars are equal when it comes to withstanding downy mildew.
The best defense against this disease is use of basil cultivars that are resistant to downy mildew.
Along with planting resistant varieties, it is also helpful to have good air circulation around the plants and to water the plants with drip irrigation at the base of the plant.
Fungicides can reduce disease pressure, but only if they are applied before the disease develops.
Basil downy mildew, specific to this crop, can spread rapidly and result in complete yield loss. Infection starts on lower leaves and moves up the plant.
The pathogen that causes basil downy mildew can transmit on seed, transplants, or fresh leaves.
It is a tropical disease and does not overwinter outdoors in most northern climates.
Plants are often re-infested when spores carried on trade winds travel from the south northward.
Weather varies by location and influences the disease pressure along with the amount of sunlight the plants receive and air circulation each year.
Italian sweet basil, which is the most popular for use in culinary dishes, is highly susceptible to downy mildew. Since 2019 the University of Maryland Extension has been testing out cultivars that were breed for resistance to this disease.
In 2019, Rutgers University released several Italian sweet basil cultivars reported to have good downy mildew resistance. They are Ocimum basilicum Rutgers Devotion DMR, Rutgers Obsession DMR, Rutgers Passion DMR, and Rutgers Thunderstruck DMR.
Proven Winners has released Amazel basil last year and this year released a second, called Besto Pesto basil, both with resistance to downy mildew. Amazel, Ocimum hybrid Amazel basil, is a sweet Italian basil and Besto Pesto, Ocimum hybrid Besto Pesto, is also a variety of sweet Italian basil, both which look very promising for dealing with this disease problem.
Unlike typical basil, Amazel basil is seed sterile, and is produced through vegetative cuttings that are rooted. Besto Pesto basil is also produced through vegetative cuttings but can produce some seeds.
These two varieties of basil continue to produce leaves and shoots even after flower initiation, unlike other basil varieties that focus most of their energy into seed production.
Proven Winner suppliers suggest for best flavor and leaf production to harvest and or pinch leaves regularly to promote fresh tender growth.
If heavy flowering happens late in the season, it will likely affect taste, but when the plant is actively growing new leaves and shoots it will have its best flavor.
If you have insect or plant problem perplexing you send us an email at dfplantquestions@gmail.com.