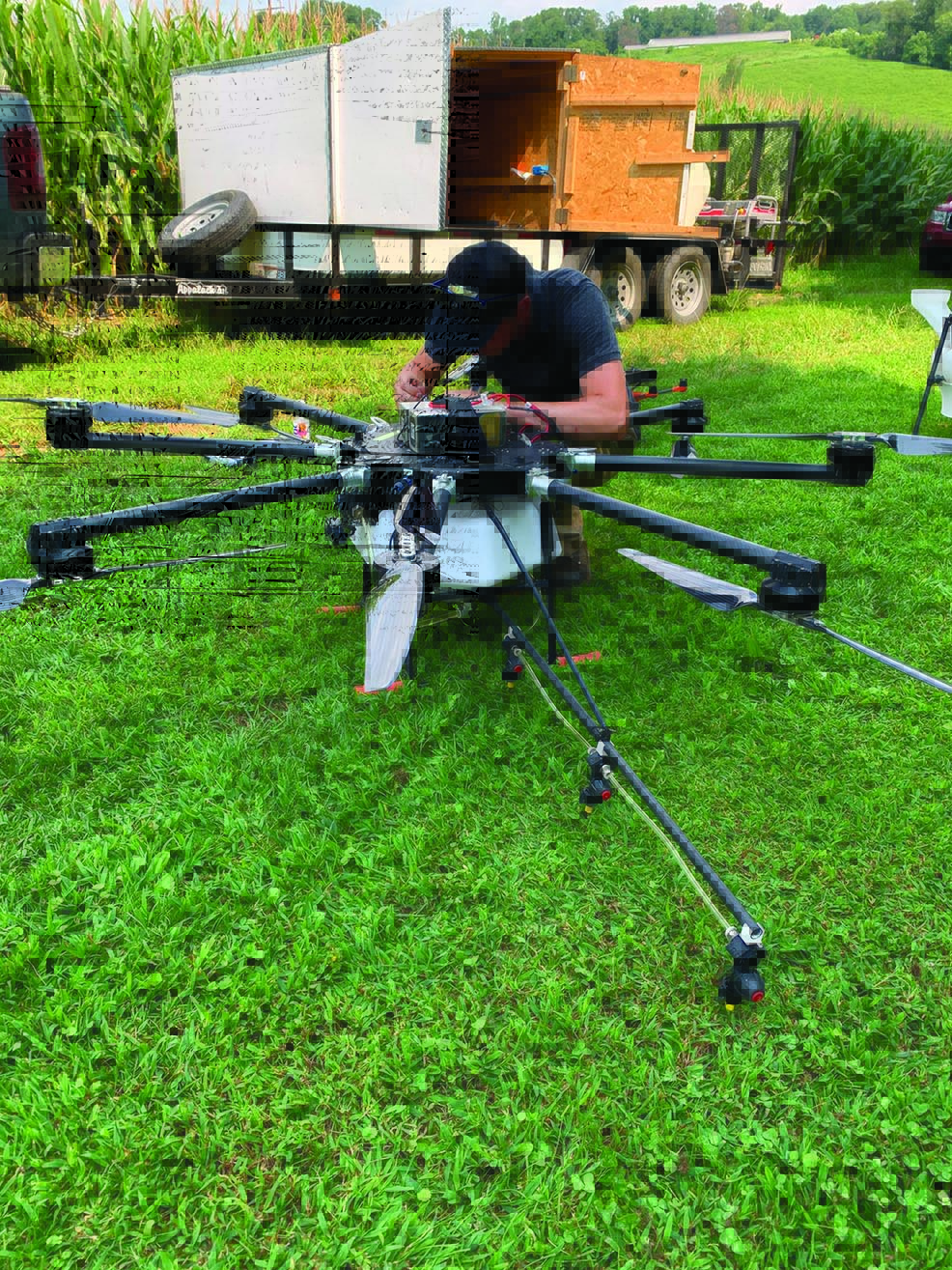 WHITE HALL, Md. — As fast as technology in agriculture moves these days, it can be tough to know how feasible a new practice or tool is to use.
Drones and their increased capabilities have come a long way in a short time but that fast pace has created as many questions as answers.
Five years ago, Erika Taylor, University of Maryland Extension ag agent for Baltimore County, said drones used in agriculture were relatively small and mainly focused on imaging and field mapping.
“Now they look like small helicopters,” Taylor said. “And they’re the size of a pick-up bed.”
Besides a camera, this next generation of drones can carry a payload of seed, pesticide or fertilizer and apply it in field, but how it compares to using wheeled sprayers or manned aircraft isn’t fully understood.
As part of a Maryland Soybean Board-funded study, Taylor and Andrew Kness, University of Maryland ag agent for Harford County, worked with Baltimore County farmer Jay McGinnis to look at the effectiveness of using a drone to apply cover crop seed.
For the study, McGinnis had radish seed flown onto a 24-acre field of standing corn in August, part of 85 total acres he had seed applied by a drone piloted by Kirk Floyd of KDrone Services and custom applicator Delbert Burkholder.
“It’s great to have people like Jay interested in this. It makes it easier to put an on-farm trial out,” Kness said.
Kness said drones are appealing for use in small and odd-shaped fields that are tough to move equipment in and out of or not suitable for manned aerial application.
But, like any farming practice, McGinnis said, “it comes down to cost — the bottom line — and then availability.”
The team is collecting data on canopy coverage and plant density of the seeded radishes to inform on the overall question of its feasibility.
On Oct. 20, the radish crop canopy was 38 percent, Taylor said. On Nov. 19, it was 95 percent.
McGinnis said it’s quite a difference from last year when the seed was flown on just as the weather turned dry and stayed dry.
This year he said, “it rained before and right after (seeding) so it was like ideal conditions.”
The radish’s small seed size makes the drones 40-pound hopper go a little farther in the field, he said, and radishes are helpful in multiple ways.
It cuts down on erosion, adds nutrients and organic matter to the soil and creates about two to three additional weeks of grazing for his beef cattle herd as they eat the leaves off first and then go back over the ground for the radish poking out of the soil.
“It can take a beating and still come back,” he said.
With high voltage power lines running through is fields, McGinnis said an ag plane is out of the question for field application.
In his area, to apply seed early into a standing crop, which garners a bonus incentive in the state’s cover crop program, that leaves a helicopter or now, a drone as options.
McGinnis said he has been flying on cover crops by helicopter for at least 6 years and this is the second year he’s used a drone service to apply cover crop seed.
“I think the benefit of a drone is you get better coverage, you get the field edges,” McGinnis said.
But, with reloading the smaller hopper more often and changing batteries frequently, seeding the 24-acre field took much longer than if a helicopter flew on the seed.
“It’s an all-day adventure, that’s maybe the one downside,” Taylor said. “On a good day he might be able to cover 120 acres.
Navigating the hilly terrain and maintaining line of sight for drone flight were also challenges the pilot faced, Taylor said.
Cost of using the drone, McGinnis said, is comparable to a helicopter or ground rig, about $20-$25 per acre.
Taylor and Kness said with the data they gather, they’ll share their findings with other interested farmers but hope to repeat the trial for another year and ideally do a side-by-side trial with a helicopter applying seed as well.
As the technology continues to develop, Kness said it may reach a point where individual farmers have their own drones for field application.
McGinnis doesn’t disagree but said it’s still a matter of cost and efficiency.
“It’s like any other tool,” McGinnis said. “No piece of equipment is cheap.”