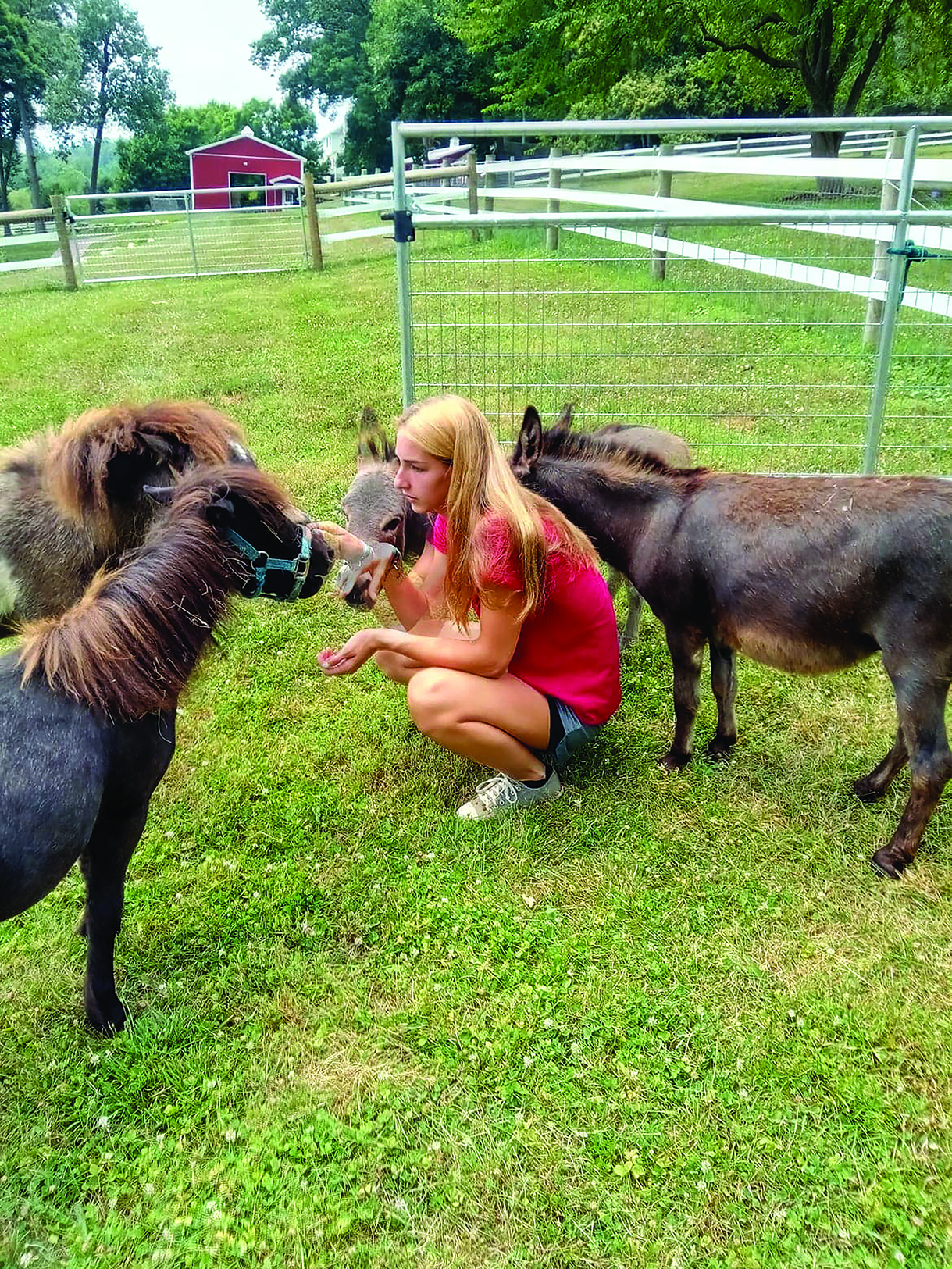 Molly Newton prepares mini donkeys and ponies for a trip to the barn at Cedar Gate Farm. (Photo by Steve Sears)

DENVILLE — “We’re going to have a storm, so I’m going to have to bring these guys in — the donkeys and the ponies over there,” says Cedar Gate Farm owner Larysa Breem, pointing to a large fenced-in area on the north side of her property.
Ernie and Bert, the donkeys — both camera hogs — are preparing to greet visitors with a “nose” kiss.
Mini-ponies Bootz and Piper are keeping them company.
Breem and Molly Newton, whom Breem is mentoring in cooperation with the latter’s schooling with the Morris County Vocational District Academy of Animal Science program, walk slowly towards the area where two miniature donkeys and ponies each are slowly grazing on a beautiful Wednesday.
Newton is “a good kid with a great head on her shoulders,” Breem said. “She loves animals and understands the responsibilities of having them as well. She’s a great attribute here as well as an eager learner.”
Newton will need 120 hours of approved internship to complete her studies by the end of her senior year.
She is just a freshman. She is well on her way.
Breem’s eyes are nervously looking overhead. A red-tailed hawk flying above, seeking to swoop downward and steal one of Cedar Gate Farm’s chickens, many of them top producers (onsite chickens produce about 30 dozen eggs a week, which are sold at the farm store). “I could lose 12 in a day,” says Breem.
Frederick and Larysa Breem are keeping memories alive at the 116-year-old farm, while at the same time pointing it towards the future.
Three beehives recently arrived for honey production, and a cleared-out area in the rear of the property is a future location for you-pick blueberries. “That would be exciting,” Breem said.
Then again, “exciting” is everything that Breem is making happen at 104 Parks Road.
She and her husband purchased the property in 2016, and since then it has been a locale, yes, for reliving the past, but at the same time education. Breem has hosted four- to eight-week programs on farming basics for her “Barnyard Kids,” local children who are learning how to feed and take care of the animals and the property.
She smiles when speaking fondly of the youngsters while walking toward and pointing out a small red structure, a well, that still has water in it.
Wishes are often made, rocks tossed in. COVID19 has halted the “Barnyard Kids” program since March, and you can tell in Breem’s voice that for her it is a huge void. “I want them to grow up someday and have them say, ‘I remember working there…I remember helping out there.’”
Frederick Eugene Parks purchased the farmland for $900 in 1903, and his farm was in business a year later.
Originally a dairy farm, it was generationally passed down until Dr. William Rodda sold it to the Breems, who currently farm 11 acres.
They built a new house to replace the one on the property that had deteriorated, and also renovated the barn.
Currently 100 chickens, seven goats, six sheep (whom they shear to create skeins), and the before mentioned donkeys and ponies “live” on the farm.
Melvin is the Cedar Gate mascot, and you can find him in the sheep and goat section of the barn. “Blossom, Harmony, and Melvin,” says Breem, pointing out the older brother and younger twin sister sheep.
“Each will roughly produce 60 lbs. each for our first season,” Breem says when speaking about the newly arrived hives. “Each consecutive year, we may be able to harvest the honey in the Spring and Fall seasons and receive even more.
“But with this being our first season, we are using an approximation from this area and what our beekeeper has estimated for us. We will also find out more about what type of honey we will are producing (such as wildflower, clover etc.) very soon. Again, our guess will be clover, as our pastures have been blanketed with white clover this year.”
The Breems promised the former owners that they would bring the farm back to life. They have. It lives.
“Keeping it alive is doing exactly what I’m doing — keeping me going,” Breem states while smiling. “It’s keeping me happy; it’s keeping me alive. Keeping it alive means many different things. It’s an everyday event. It’s morning, it’s afternoon.”
She then adds, “Because I can create a vision in my head, there’s so much here to be realized as long as you put your mind to it,” Breem said.