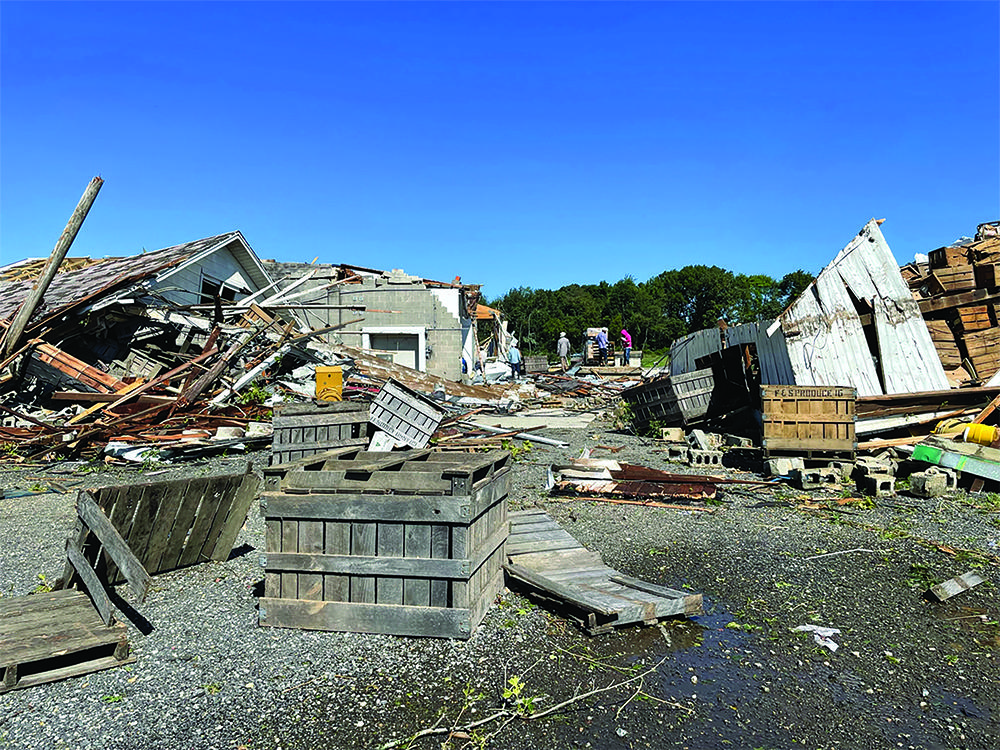 An EF-3 tornado with winds up to 150 mph destroyed a produce farm owned by Larry Grasso in Mullica Hill, N.J., on Sept. 1. All of the farm’s buildings, including the family home, were destroyed. Volunteers from across the community have helped clear debris and free equipment. (Photo courtesy Katie Grasso)

MULLICA HILL, N.J. — Lenny Grasso had heard tornado storm warnings on the television before, but they rarely, if ever, amounted to anything around his South Jersey produce farm.

So before he received a warning on his cell phone in the evening of Sept. 1 while he and his wife watched local weather coverage, he wasn’t overly concerned. It had been raining heavily.

His feelings changed, however, when the rain and wind suddenly stopped.

Within seconds, he could hear a tornado approaching. He and his wife rushed to their basement and “held on for dear life,” he said. It was around 6:30 p.m.

It took mere seconds for the EF-3 tornado, the region’s most destructive in recent memory, to tear through the Grassos’ Gloucester County farm, leveling all of its buildings, including their home, a new produce packing facility and a migrant labor camp. The National Weather Service said the twister’s winds reached 150 mph.

“It could have easily killed anyone with that force,” Grasso said.

The tornado, which also nearly destroyed New Jersey’s largest dairy farm just a few miles away, was one of at least 10 spawned by the remnants of Hurricane Ida as they moved across the Northeast from Maryland to Connecticut that day and the next. The storm’s once-in-a-century rains led to flooding that drowned more than 50 people, including at least 25 in New Jersey and another in Maryland.

“It was incredible and unbelievable,” Grasso said. “I think we were all in shock for several days. It only begins to sink in later.”

Another less-powerful tornado also struck Anne Arundel County, Md., at around 2:15 p.m., the Weather Service said, causing widespread damage in the Annapolis and Edgewater areas. A second tornado was recorded in Charles County, Md. The storm dumped nearly two inches of rain at BWI Airport between 2 p.m. and 7 p.m., causing isolated flooding across the state.

But the Grassos and the dairy, Wellacrest Farms, likely saw the worst of it. Marianne and Wally Eachus were eating dinner when the tornado hit Wellacrest. The clouds were intense and swift, then there was a sound like a freight train, Marianne recalled, so they ran to the basement.

When the tornado passed, they saw that two of their massive grain silos had toppled over. Some barns were completely reduced to concrete rubble, roofs ripped off others, equipment was demolished, uprooted trees crashed into the old farmhouse.

Hundreds of cows were trapped under collapsed barns. Thirteen have died, a couple dozen more suffered injuries. A crew was milking when the twister ripped and had only seconds to hide and hold on. They saw several cows swallowed by the funnel. Up to 100 cows were still missing on Sept. 6.

For hours after the tornado, Marianne Eachus and her family, joined by neighbors and friends, worked to corral the cows back into pens in drenching rain.

Wellacrest was established in 1943 by the parents of Marianne’s husband, Wally Eachus. Just over 20 years ago, Marianne and Wally took it over and still run it with the help of their kids. The farm produces more than 17 million pounds of milk yearly and works with other farms to share and sell crops. There are 1,400 cows on the property, about half of which are milking cows.

Within days, fundraising efforts for both farms began. The Gloucester County Board of Agriculture launched its own GoFundMe page, which has received more than 800 donations totaling more than $90,000 as of Sept. 10. Another GoFundMe page for Wellacrest has received more than 1,000 donations totaling nearly $100,000. An emotional Grasso said he was stunned by the generosity. Neighbors, relatives and members of the local farming community quickly began pitching in at the Grassos’ farm to clear downed trees and free equipment trapped under rubble, he said.

“Having never been through anything like this before, I guess the overwhelming generosity and sense of community from everyone here has overwhelmed us,” he said.

The Eachus family has seen a similar outpouring of support. Local businesses brought in excavators to help free cows, others helped with electricity, plumbing, even more helped haul away debris. The cows have food, water and somehow, the entire milking operation has returned.

“I don’t know how we will rebuild,” Eachus said. “We have no choice. We have to. Or all this is for nothing. Will we just walk away? We can’t. This is our home.”

Other farmers in the area escaped damage, said Michelle Infante-Casella, an agricultural agent and professor at Rutgers University. While up to 10 inches fell in northern New Jersey, local farmers experienced little flooding. Several days later, some farms were already irrigating, she said.

The Grassos are still working with their insurer to determine the total cost of the damage. FEMA approved a disaster declaration on Sept. 8 for six New Jersey counties, including Gloucester, so the affected can seek financial assistance. While farms in the area may have gone untouched, many homes around the Grassos were damaged.

“We share a lot of grief with a lot of the folks who lost a lot of property,” Grasso said. “The hope is to recover, rebuild and continue, but that’s the hope right now. I’m not sure what I’m going to do, considering my age and all that. … I’m only trying to do the best I can to get back on my feet here. It’ll take time.”

(The Associated Press contributed to this story.)