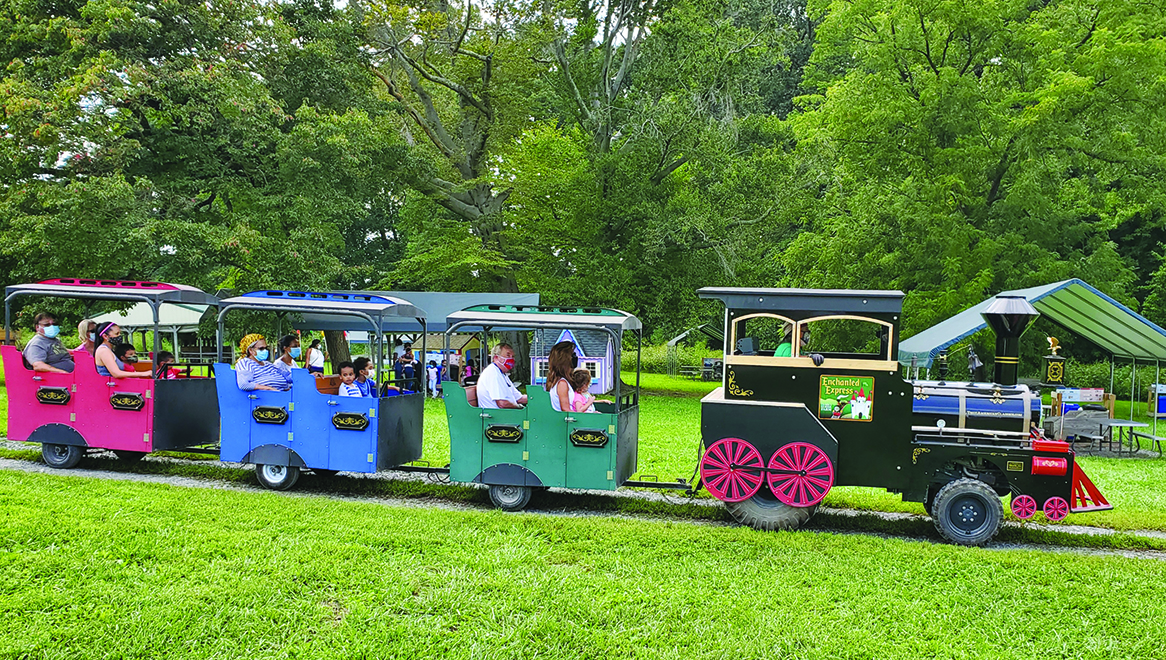 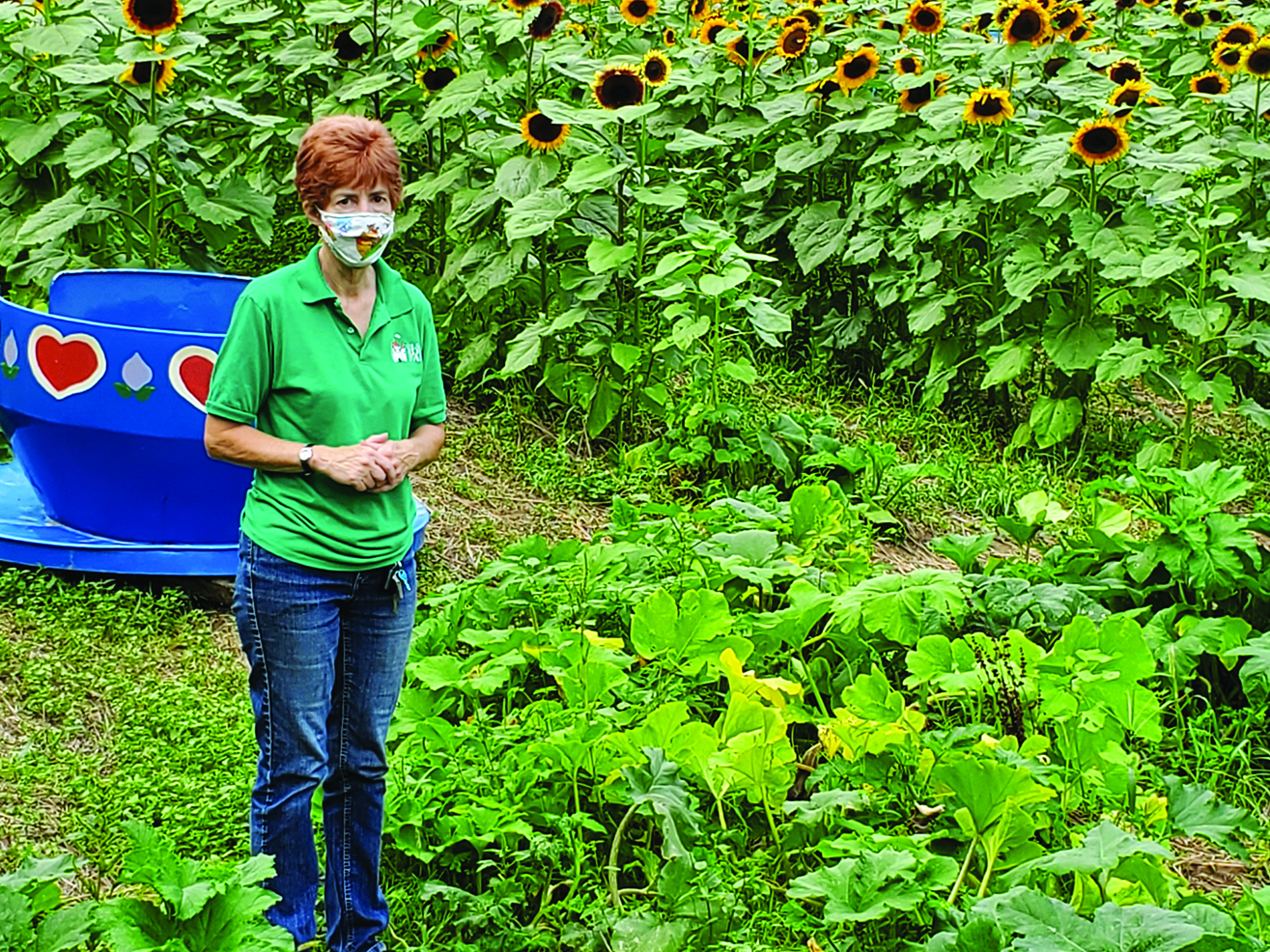 Standing in a small patch of volunteer pumpkins, Martha Clark of Clark’s Elioak Farm stops before an Enchanted Forest tea cup, one of several whimsical photo props set up throughout their sunflower field. (Photo by Joan M. Kasura)

CLARKSVILLE, Md. — The Friday afternoon before Labor Day weekend had been the first day without rain since Clark’s Elioak Farm had extended their hours into the early evening to offer folks additional time to take photos of their sunflower fields. If the almost full parking lot was any indication, then fall agritourism will still be alive and well this year in Central Maryland.
“Historically this summer, we’ve been busy on weekday mornings and the weekends, if nice,” said Martha Clark, a sixth-generation farmer, who along with her daughter, Nora Crist, runs the 540-acre farm in Howard County.
“We don’t normally get so many people in the afternoon, because that’s when the little ones, who usually come in the morning, take naps,” Clark said.
“And, if the parking lot looks full,” she continued, “you can see once you get back here at the farm, that folks are nicely spaced out for social distancing.” Clark credited both their ticketing system and her staff for that result.
Clark first noted that all the various ticketing systems available “all work pretty well, although each has its quirks.” In the end, she said they decided to use ShowClix because “it allows flexibility.”
Based on multiple factors, “we can add and take away times at the drop of a hat,” she continued, the most critical of which is the comfort level of both her staff and customers. “We’ve timed ticketing so people come in gradually during the day”
“We also know people normally spend about two hours at the Farm,” Clark said, “so, we try to manage accordingly.”
Another important factor is whether “any of the lines seem too long” for their various rides, Clark added, pointing to the Enchanted Forest Train that was just pulling into the station.
Then, during a quick tour of the farm coupled with a walk up to the sunflower fields, Clark explained the numerous additional measures they had put into place to accommodate social distancing requirements for their customers.
Beginning with the hay wagon ride, she explained that social distancing has been achieved by only allowing four groups or parties of guests, one in each corner, on each ride. A similar strategy is in place for the Enchanted Express Train, where each of its three individual cars holds only one group at a time. Last, their Cow Train, a barrel train with cars painted to look like cows, allows only one individual per car.
Clark said they clean each ride at the end of each individual circuit of the ride. “We have one person on staff all day, every day, to clean,” she said.
The animals are still available for the petting farm, particularly the goats, but the machines where feed could previously be purchased for a quarter have been discontinued. Instead, “we’re selling individual bags of feed in the Castle Store,” said Clark.
Although the petting farm was closed through the spring, they had been doing curbside pickup at their produce stand during March, April and May.
They were able to open the petting farm as of June 9, and moved their curbside pickup to its Castle Store, until their produce stand opened for its regular summer schedule on July 1.
Clark said that even then “everything was so uncertain [for both the summer and fall], we decided to plant sunflowers in their front field and then bring pumpkins in if we were able to go forward with fall activities.”
She said their hope is to use the current activity level for their sunflower promotion for their fall pumpkin patch activity.
They also are using their Sunflowers & Sunsets event during the first two weeks of September to assess whether they can continue to stay open later in the evening during the initial weeks of this year’s pumpkin patch, which begins Saturday, Sept. 19.
“Because we’re open later – until 7 PM –, it’s a good place to come with kids after they’ve been doing online schooling all day,” she said.
She also hoped the later hours would also entice adults without kids to come and not only enjoy being outside, but also catch an evening meal from the food truck they have invited from different area restaurants on the two weekends.
Or, perhaps grab a popcorn and lemonade snack from Kettle Krazed, a local fresh artisan popcorn vendor, who will be at the farm both late weekday afternoons and from noon on weekends.
“We have a little bit of everything,” Clark said. “We’re trying to offer a safe environment where people can come and enjoy our great outdoors this fall.”