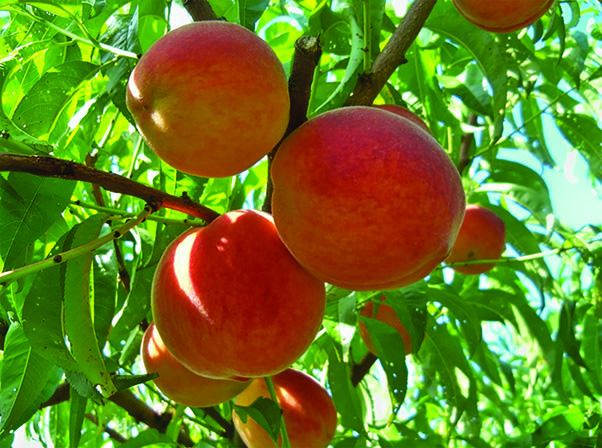 Peaches grow in an orchard at Godfrey’s Farm in Sudlersville, Md. The operation includes 600 acres, where peach trees grow on about 10 acres. (Photo courtesy Godfrey’s Farm)

For many Delmarva residents and visitors, peaches are summertime treats whether buying in farmer markets near beach towns, in a grocery store in an urban setting, or picking directly from trees in orchards dotting the landscape.
According to the USDA’s 2017 Ag Census, there were 11 farms growing peaches in Delaware — five farms in Kent County, two farms in New Castle County, and four farms in Sussex County.
On the Eastern Shore of Virginia, according to the USDA, Accomack County had two farms growing peaches in 2017 and one farm growing this fruit in 2012, while Northampton County had two farms growing peaches in 2017 and three farms doing the same in 2012.
In Maryland, the census shows peaches were grown on 61 acres at six farms in Caroline County, three farms in Cecil County, two farms in Dorchester County, three farms in Kent County, on 27 acres at four farms in Queen Anne’s County, one farm in Somerset County, four farms in Talbot County, and at two farms in Wicomico County.
One of the Delmarva farms that grows peaches is Godfrey’s Farm, located in Sudlersville, Md. The farm includes 600 acres; peach trees grow on about ten acres of the farm. In addition to peaches, the farm also produces asparagus, strawberries, blueberries, tomatoes, and peppers, among other crops.
“We first planted peach trees 25 years ago,” said farm owner Tom Godfrey. “About six, seven years ago, we started planting a new peach tree orchard. It takes about three to four years for a new peach tree to produce a viable crop.”
The weather can have a substantial impact on fruit trees, including those producing peaches.
“We lost a portion of our peach crop earlier this year because of two frosts in April,” Godfrey said. “It was in the upper 20s for several days. The buds on some of the trees were out earlier than usual.”
“We grow several varieties of peaches,” Godfrey added. “Our late blooming varieties were not as affected by the frosts. The Saturn variety peaches, for example, are looking good at this time.”
Godfrey said the way the farm’s output is sold can vary depending on the availability of specific crops. Some of the peaches are sold directly to consumers, through farmers’ markets as well as a pick-your-own business model, he said, while other peaches are sold wholesale to independent grocery stores, primarily in the Annapolis area, and to other produce stands.
The selling options utilized by Godfrey’s Farm are among the typical methods used in Maryland, according to Bryan Butler, University of Maryland Extension agriculture and natural resources agent in Carroll County. Butler said most peaches in Maryland are sold primarily directly through markets and the pick-your-own business model.
Peach production “makes up a small but highly profitable sector of Maryland’s tree fruit industry,” said Butler. “It is somewhat volatile due to late spring freezes which can damage or eliminate the crop in any given year.”
Compared to previous years, Butler said peach production and acreage were stable in 2021. He explained that during the COVID-19 Pandemic, direct market operations “…saw record sales and business was very good.”
“Although growers have faced many challenges over the years, peaches remain an important part of tree fruit production and direct marketing in Maryland,” Butler said.