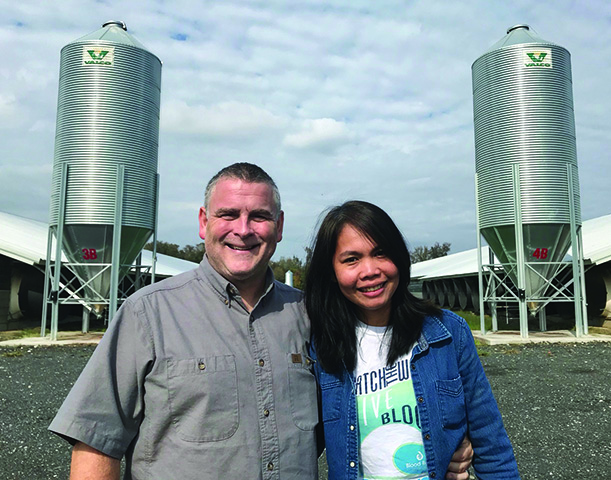 Ernie Adkins Jr., left, and Evelyn Adkins launched their poultry farm in Parsonsburg, Md., last year. It is a new venture for Ernie who spent most of his career in the U.S. Army Special Forces. He also worked as a tire salesman and a long-haul trucker. (Photo by Jonathan Cribbs)

He’s an ex-Green Beret with a penchant for explaining things in military vernacular. He’s a former tire salesman and truck driver, and he was a (terrible) cooking show contestant in 2016.

His three episodes on the Food Network’s “Worst Cooks in America,” which places a large group of culinary incompetents under the tuition of several celebrity chefs, didn’t exactly foretell a career in the broiler industry.

“My first episode I was preparing chicken,” the 49-year-old said. “Chef Tyler Florence looks down at me and says, ‘Ernie, you’re cutting the wrong side of the bird, brother. Flip it over.’”

Five years later, Adkins, a Wicomico County native, is a poultry farmer. He owns a brand-new, eight-house, 396,000-bird farm and boasts a firm grasp of avian anatomy. He’s been growing for Mountaire with his wife, Evelyn Adkins, for less than two years, happily engaged in a new career that saved him from the disenchanting micromanagement of corporate industry.

“When life throws lemons at you, catch them all and don’t just sell lemonade,” he said. “Build the biggest and the best lemonade stand that you can.”

Some of that disappointment was rooted in the letdown Adkins said he felt following a rich and varied career with the Navy, Army Special Forces and the State Department’s diplomatic security service. He left the military in 2006 after protecting dignitaries in war-torn Iraq, including Donald Rumsfeld, Condoleeza Rice and Kurdish President Masoud Barzani. Shortly thereafter Adkins found himself selling tires wholesale across the Mid-Atlantic for a small company. Despite a successful sales record, he felt he was undervalued and resented a culture where the next business deal was everything and past success was quickly forgotten.

“It was expectation and not appreciation,” he said. “One day I just cracked and said, ‘Screw this. I’m going to become a chicken farmer.’ Because it’s the biggest industry on the Eastern Shore.”

He had no clue it would take him 13 years to realize that dream. He spent most of that time looking for land while working other jobs, but he didn’t really know what he was doing. Engineers he spoke with to perform various tests on one site struggled with new state poultry house regulations and quoted him outrageous prices, he thinks, to scare him away. He reviewed more than 50 properties.

“It exhausted me to no end, but I wanted to pursue this. I wanted this,” he said. “To me it was the only way to be in business for myself and be able to make an honest living.”

He switched from the tire industry to long-haul trucking in 2012 but didn’t find it any more rewarding, bouncing from company to company in search of an employer where he felt respected. When his daughter, Katelyn, 19, nominated him for the cooking show, claiming he could “burn water,” he was accepted and took an approved, three-week sabbatical from driving.

When he returned home, he discovered his company, concerned Adkins was pursuing another job, took back his truck while he was taping in New York. He left the company. He doesn’t regret appearing on the show.

“It was the best time I had with my clothes on in quite a while,” he said. “It was great. I loved it. I got to be on TV. National!”

He found his current property in August 2016, closed on it a year later, and a new life quickly came into focus. He met Evelyn, a Filipino, on a dating website in September 2017 while she was working in quality assurance for an electronics company in Taiwan. It was a whirlwind courtship. Within a year, Ernie proposed to her in Taipei. They were married, and Evelyn followed him back to Maryland.

“It was a tough decision, but at that point of my life I was like, ‘OK, I’m ready to settle down and leave everything behind,’” said Evelyn, 37. “I was excited.”

She arrived in time to assist in the construction of the poultry farm, built with a $5 million loan. They helped pour footers, raise walls, order equipment and welcomed their first flock in April 2019.

“Our first flock was a disaster because we didn’t know what we were doing,” Ernie said. “It was like drinking from a firehouse.”

Some of the farm was still under construction, and they fell so far behind that they sought help from another local farmer, Ryan Brady, who showed them small efficiencies such as the fastest way to clear mortalities each day. Evelyn developed a knack for monitoring the drinkers and feeders. Her quality assurance experience helped.

“Growing chickens is like working in a factory,” she said. “You have to find the defect. It’s easier for me.”

In the beginning, Ernie contracted the flu and was sick for several weeks, leaving Evelyn to manage the houses 10 to 12 hours a day.

“I couldn’t do this without her,” Ernie said. “She makes me look like a toddler. She has more initiative than I do.”

A year into it, Ernie and Evelyn consider themselves above-average growers. Ernie said he’s regained the autonomy he enjoyed as a special forces operator, but he misses the high stakes of combat. Many of his fellow veterans feel the same way, he said.

“I thoroughly enjoyed my service,” he said. “I wish I wasn’t so old that I couldn’t do it anymore, and that’s a struggle some days.”

But he considers poultry farming one of the biggest adventures of his life.