BUCHANAN Va. — Response to the fifth year of the Beaver Dam Farm Sunflower Festival led Candence Monaghan to expand the days she opened the family farm to the public and to sell tickets at the gate. The original plan was by tickets purchased only online.

When some of these ticket holders did not show, she decided to open the fields to visitors on Monday and Wednesday evenings.

“People like the evening hours,” she said. “It gives them a different time to see the flowers.” 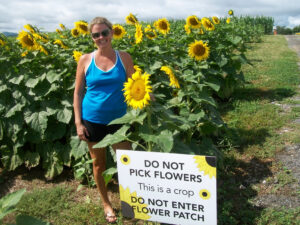 Candace Monaghan was putting the finishing touches in place in the days before her farm’s Beaver Dam Sunflower Festival. In its fifth year, the festival has expanded to include evening hours during the week. Photo by Jane W. Graham

Monaghan operated the festival within the restrictions imposed by COVID-19, including limiting the number of people allowed in the fields at any one time.  The online ticket sales were one way she hoped to keep track of visitors. She estimated about 3,000 people visited during each of the first two days of the festival.

Monaghan was busy on Thursday prior to the Sept. 12-13 opening weekend of the festival taking care of final details; posting signs and positioning portable restrooms.

The signs asked visitors to not pick the flowers, informing them that the sunflowers are a crop that will be harvested.

The finishing touches came long after the work that started with planning in November 2019. In June, Monaghan began carrying out her plans for the coming year by preparing the ground for her black oil sunflowers. She planted them in July, using a corn planter to get the job done. She harvests them for bird seed that is packaged on the farm and sold in local outlets.

The sunflowers and the festival are part of the family’s efforts to transition from dairy to other enterprises. She farms with her parents, Frank Preston Wickline III and Linda Wickline. The dairy cows left in 2019 as the farm became a beef cattle farm. It also produces hay and straw.

Monaghan said she became interested in growing sunflowers several years ago and planted 20 acres in 2016. It expanded into an annual event anticipated by the community, gaining local television coverage in the process.

This year, Monaghan planned successive plantings to ensure visitors on both weekends of the festival would see the flowers at their peak. She planted two crops in different fields, adding red sunflowers which greeted visitors at the entrance.

Monaghan said she discs the land prior to planting.  She also rotates the fields to keep the soil healthy. The rotation this year was with turnips and grass. When the flowers bow to the ground and the visitors are gone, she will harvest her sunflower seeds with a combine and package them for sale.

Then she will start planning for another year.