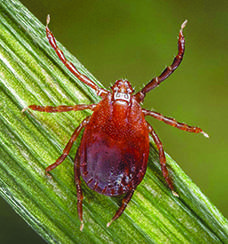 COLLEGE PARK, Md. — Maryland and Delaware have somehow kept the Asian longhorned tick at bay since it first arrived three years ago, but the University of Maryland Extension continues to encourage farmers to be on the lookout for the invasive parasites.
After COVID-19 interrupted the Extension’s ability to regularly visit farms and monitor tick populations in the state for a year, agents, working in concert with the Maryland Department of Health, have been back out since April, recording numbers of several tick species, including the longhorned tick, whose aggressive biting can cause severe blood loss in cattle, reducing growth and productivity.
“It can really run a cow down,” said Racheal Slattery, beef and dairy Extension coordinator. “It can be a real serious economic problem.”
Known as Haemaphysalis longicornis, the tick was first discovered in the United States in 2017. It was then found on a white-tailed deer in Washington County, Md., in August 2018, the first recorded sighting in the state. By the end of the year it had established itself across much of the Northeast.
But for unknown reasons, the number of ticks found in Maryland during surveys has remained surprisingly low, Slattery said.
“We’ve been very lucky so far,” she said. “Normally the population explodes. … It’s not at all like it’s been in Virginia.”
The most Asian longhorned ticks found on a Maryland animal is two, she said. Anything between 50-100 would be concerning. But it’s common to find up to 20 ticks of any species on a healthy cow, she said.
The Extension is asking farmers to say “keenly aware” of what their livestock are hosting and to limit their access to wooded areas if necessary. Farmers should also recognize that tall grass provides shade for ticks. Removing that grass makes it harder for them to survive.
“When you dry out a tick, that’s how you kill it,” Slattery said.
Farmers should also check their cows for ticks, focusing on the ears and the armpits between the back legs and the udder. If they think they have an issue, they should call their county Extension.
The longhorned tick has been such a problem in New Zealand and Australia that it reduced dairy cattle production by a quarter. They can also transmit pathogens to cattle that can cause disease, including a virus known to cause severe illness in humans.
Slattery is also asking farmers, who are at risk for other tick diseases, to take their own precautions.
“Please wear Deet when you go outside,” she said. “It’s pretty gnarly out there. It’s a bad tick year.”