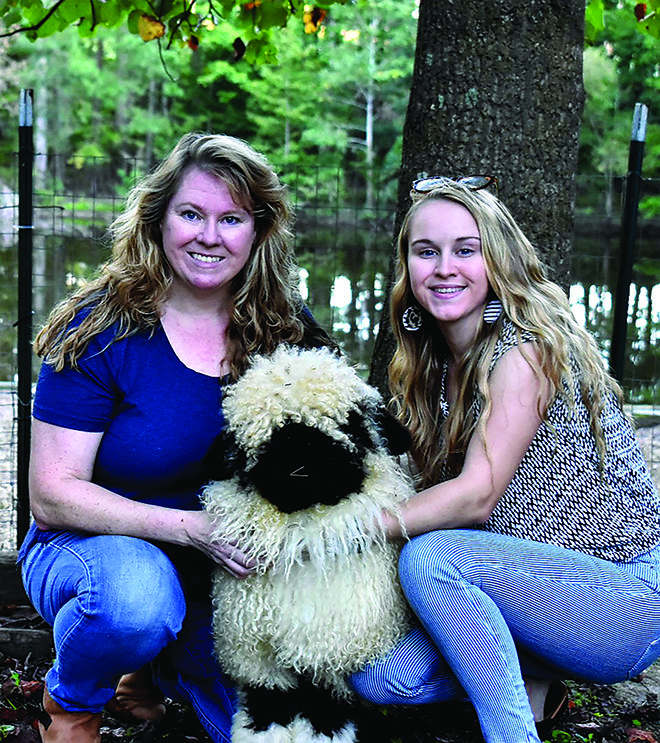 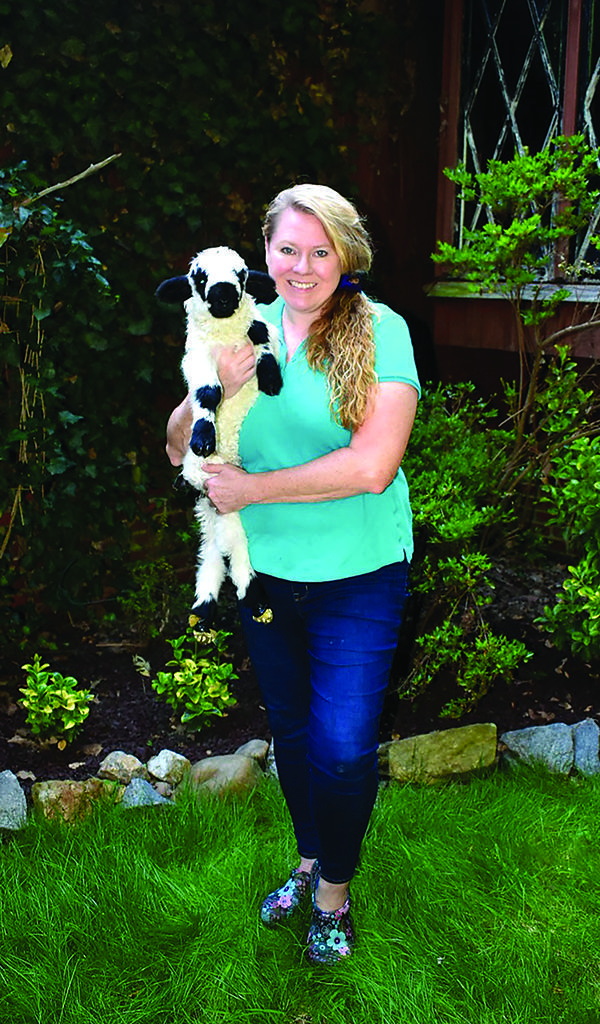 In the top photo, Candie and Aviana Francher hold their first purebred Valais Blacknose sheep “Indiana Jones” at age 4 months. As the family works to establish and grow the breed in the United States, this is the only purebred Valais Blacknose in Virginia. Candie Francher, above, holds Valais F1 Jersey seven days after she rescued it from being attacked by a snapping turtle. (Photo courtesy Candie Francher)

DINWIDDIE, Va. — Candie Francher was confused at first when she made an unscheduled check recently on a ewe she was expecting to lamb. She found the ewe with one newborn lamb but heard the cries of another.
Within moments, she realized the bleating was coming from a nearby pond where another lamb was struggling in the water.
Francher jumped into the water and grabbed the baby lamb and in a flash she saw a snapping turtle was clenched onto the lamb’s tail.
“I just saw him as he flipped off,” she said a week later in a telephone interview. “She was very healthy. She was treading water. Another minute and I think she would have drowned.”
Francher would have dashed in the water to save any distressed lamb, but this was a special one, she said; part of her efforts to introduce Valais Blacknose sheep, a Swiss breed, into the United States.
Francher gives the credit for her finding and rescuing the lamb to God.
“I view it as God put me out there,” she said. He uses us to do His will. He uses special ways to remind use He’s in control.”
The turtle had done serious damage to the lamb’s rectum and tail. Francher immediately took it to the community’s only veterinarian, Richard Grenoble at the Chesdin Animal Hospital. She watched for an hour as he stitched and stapled the tears in the small animal. The vet had to amputate the tail, but the lamb is now functioning normally with Francher caring for it as she would for a baby in diapers, she said.
Candie and her husband Greg Francher are retired United States Air Force veterans who started their hobby farm here 12 years ago with son Bailey, 23, a fourth-generation member of the Air Force and daughter, Aviana, 20, a Certified Nurse’s Assistant who is in college, studying nursing. Aviana is named for the Italian town where her parents met while serving overseas.
Candie said the family’s love for animals has led them to own some of the largest and some of the smallest, ranging from Clydesdales to chickens and Baby Doll sheep, the smallest of sheep.
The horses have been sent back to their original home as they proved too much for Candie, a registered nurse at John Randolph Medical Center and Greg, an electrician employed by the federal government.
Francher is treasurer of the young organization, the Valais Blacknose International Sheep Breeders Association and Registry. The group’s goal is to develop this breed in the United States preserving strictly the Swiss standard. She said it is the most common sheep in the United Kingdom and Europe but added the USDA will not allow it to be imported.
This rule is the reason for the breed-up program the group is using to create an American strain of purebred Valais Blacknose sheep. The process involves obtaining semen from European rams, using AI to breed a purebred ewe from another breed. This produces a lamb that is 50 percent Valais Blacknose. This process is repeated three more times when females are born. This fourth-generation ewe can then be registered as a domestic female. For rams, it is repeated one more time, creating a fifth generation.
This is necessary, Francher said, because the ram has to be closer to purebred.
To keep track of the generations, the group uses the following identification system based on the percentage of the desired breed the animal has.
They are F-1, 50 percent; F-2, 75 percent; F-3 87. 5 percent; F-4, 93.75 percent and F-5, 96.88 percent for rams is even higher.
The breeders collect DNA from each lamb to ensure that they can identify the animal correctly. Each one must have the correct black markings to meet the Swiss standard.
The organization also works to educate people about the breed. Since 2020 the group has also been able to use embryos as they can now be permitted in the United States. More information is available at virginiavalaisblacknose.com
The Franchers now have one purebred ram on their Boulderbrook Farm. They’ve named him Indiana Jones. He is the father of the lamb Candie saved in the pond, which is named Jersey.
The animals calling Boulderbrook Farm home have varied during the years and Candie said that will continue. They are a mini-pony that lives with the goats, chickens, ducks and two pot-bellied pigs. Francher reported she has a flock of 11 adult Baby doll sheep, a closed flock of Nigerian dwarf goats, a mini pony that lives with the goats, chickens, ducks and two pot-bellied pigs.
She seems to be keeping to a theme of large and small with her dogs. A Great Pyrenees is their guardian animal. She raises Pomeranians, too.