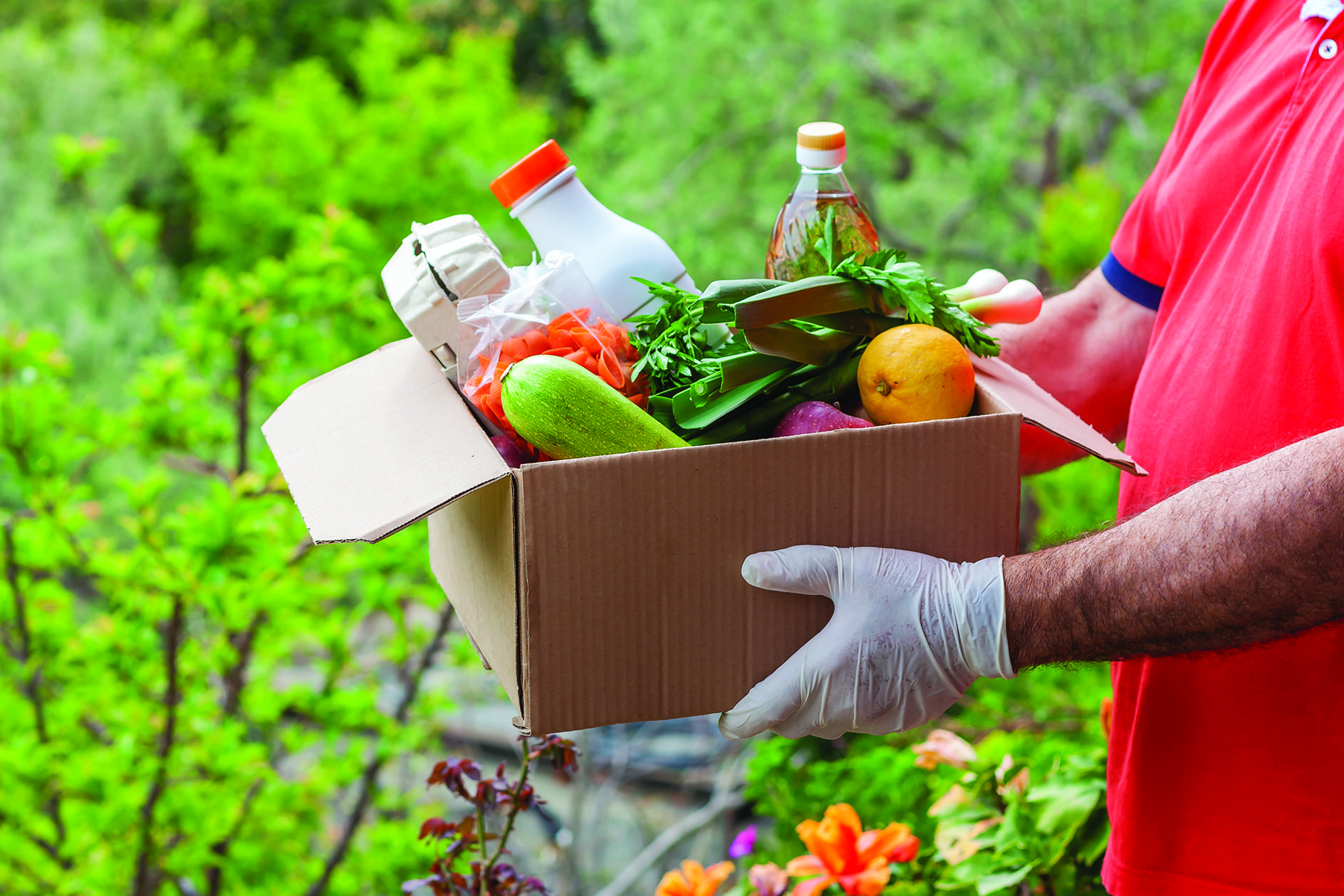 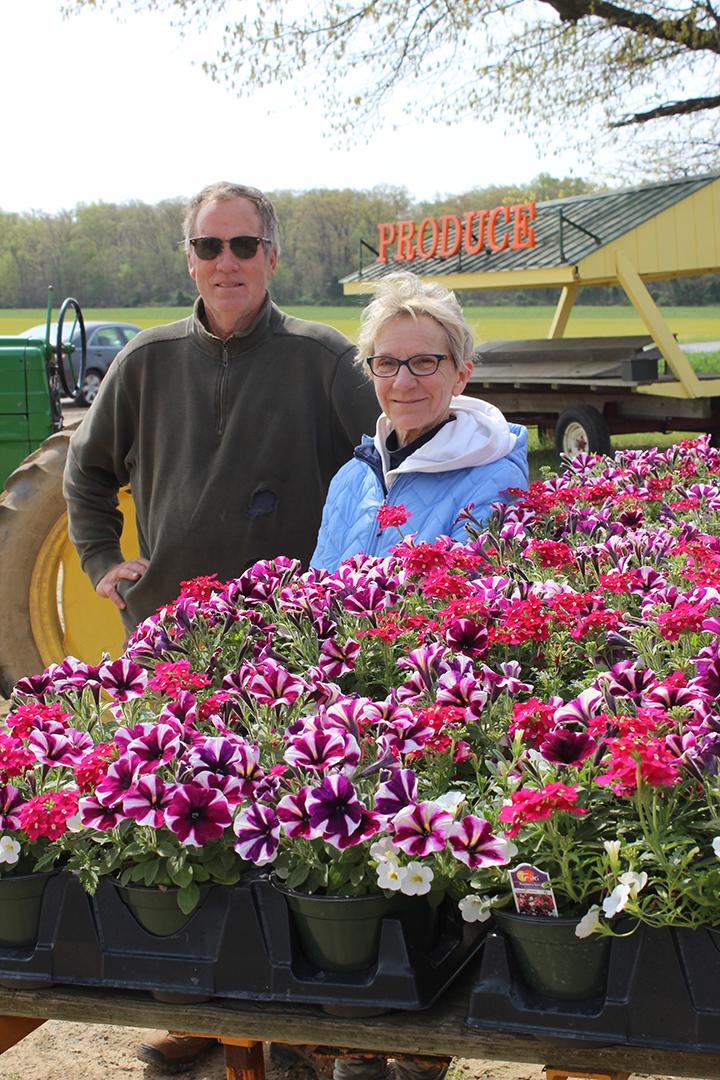 Bob Arnold and Margaret Frothingham of Arnold Farms in Chestertown, Md., are among 10 farms that have participated in the Maryland Farm to Food Bank program for all 10 years of its existence. (Photos by Sean Clougherty)

When produce grown at Bob Arnold’s farm leaves for the Maryland Food Bank, he knows firsthand the kind of difference it could make for the people it reaches.
Growing up in northern New Jersey, Arnold was 12 when his father died in a construction accident and said his family struggled greatly for a few years.
“It was tight,” he said. “We lived on some charity from our church as far as food.”
Along with that experience, Arnold said his parents instilled in their kids the importance of community and helping others.
“There’s always been this sentiment imprinted on me that you take care of one another,” he said.
Growing about 50 acres of vegetables in Chestertown, Arnold Farms has sent food to multiple food pantries for more than 20 years and is one of 10 Maryland farms that’s participated in the Maryland Farm to Food Bank program since it began ten years ago.
In the years leading up to the program, Butch Langenfelder, Maryland Food Bank’s food sourcing manager, said the bulk of what fresh produce arrived at the food bank was unsold items from the Maryland Wholesale Produce Market in Jessup.
Arnold and First Fruit Farms, a non-profit Christian ministry growing in Baltimore County and donating produce throughout the Mid-Atlantic region, had already been donating food to the food bank and Langenfelder said the food bank leadership saw opportunity to expand.
“As an organization, we thought working with Maryland farmers was where we wanted to go,” he said.
With Amy Cawley, who’s part of a Caroline County farm family, hired as full-time coordinator for the program in 2011 the program kicked off securing 515,000 pounds of fruit and vegetables from Eastern Shore farms.
Cawley said to build awareness, she attended farmer meetings, conventions and even knocked on farmhouse doors to connect with farmers.
The job includes organizing and recruiting volunteers for gleanings and coordinating the use of pre-release non-violent inmates from the state Department of Corrections for gleanings as well.
Along with Arnold Farms and First Fruits Farm, the farms that have continued to participate in the program every year are B&K Farms, Bartenfelder Farms, Clayton Farms, Godfrey’s Farm, Hay Jay Acres, Taylors Produce, University of Maryland Extension and WesCo Farms.
In its ten-year history, the program has generated 32.3 million pounds of food from Maryland farms through donations, growing contracts between farms and the food bank and gleanings. Cawley said on average, about 50 farms participate each year, ultimately depending on how weather impacts crop yields.
“It takes a whole team, a village like they say, to get stuff done,” Cawley said. “I’m thankful there’s a diverse industry across the state. Some of these states don’t have this kind of agriculture in their backyard.”
Langenfelder and farmers in the program said Cawley’s passion for the work and familiarity with the farm community have been key to the program’s growth.
“I really believe it’s the experience that Amy brings to the table,” Langenfelder said. “Her honesty and knowledge of farming is what is so helpful.”
“They’re so easy to work with,” said Margaret Frothingham, assistant manager at Arnold Farms, who coordinates much of the farm’s food donations. “Amy is just amazing. We consider her a good friend.”
The COVID-19 pandemic has put immense strain on food banks. Last year, the Maryland Food Bank reported a 100-percent increase in demand from 2019 and a 90-percent drop in overall food and financial donations.
The pandemic ended the use of inmates for gleaning until further notice, Cawley added, and active volunteers for harvesting has dropped as well.
“Donations are probably going to be more critical than they ever have been,” Cawley said.
Another challenge is having to accept more food in smaller boxes rather than large bins to assist in social distancing.
For Arnold, having the food that might otherwise stay in the field put to good use is rewarding.
“There’s a real satisfaction in knowing that it didn’t go to waste,” Arnold said. “Yeah, you’d like to sell it, but that doesn’t always happen.”
At First Fruits Farm, where the crops are grown for the purpose of donation, founder Rick Bernstein said working with the Maryland Food Bank helps them spread their ministry to more people. About 25 percent of what First Fruits grows, goes to the food bank.
“Having a partner that allows us to reach a lot of people and a partner that has a lot of refrigerator space is great,” he said. “We really wouldn’t be able to do what we do on a large scale without them.”
The food bank’s ability to cost share on some of the inputs for the food First Fruits grows also helps the farm reach more people, he added.
“It allows us to essentially do more for small food banks and churches that essentially have no wherewithal,” Bernstein said.
As the Farm to Food Bank program enters its second decade, Langenfelder said they aim to keep growing, hopefully building more farmer relationships in Western Maryland and maintaining those existing relationships throughout the state, especially those first 10 farms that signed on ten years ago.
“It’s just been a good program of everyone coming together and wanting to help,” he said. “I wish all my vendors were as kind and generous as farmers.”