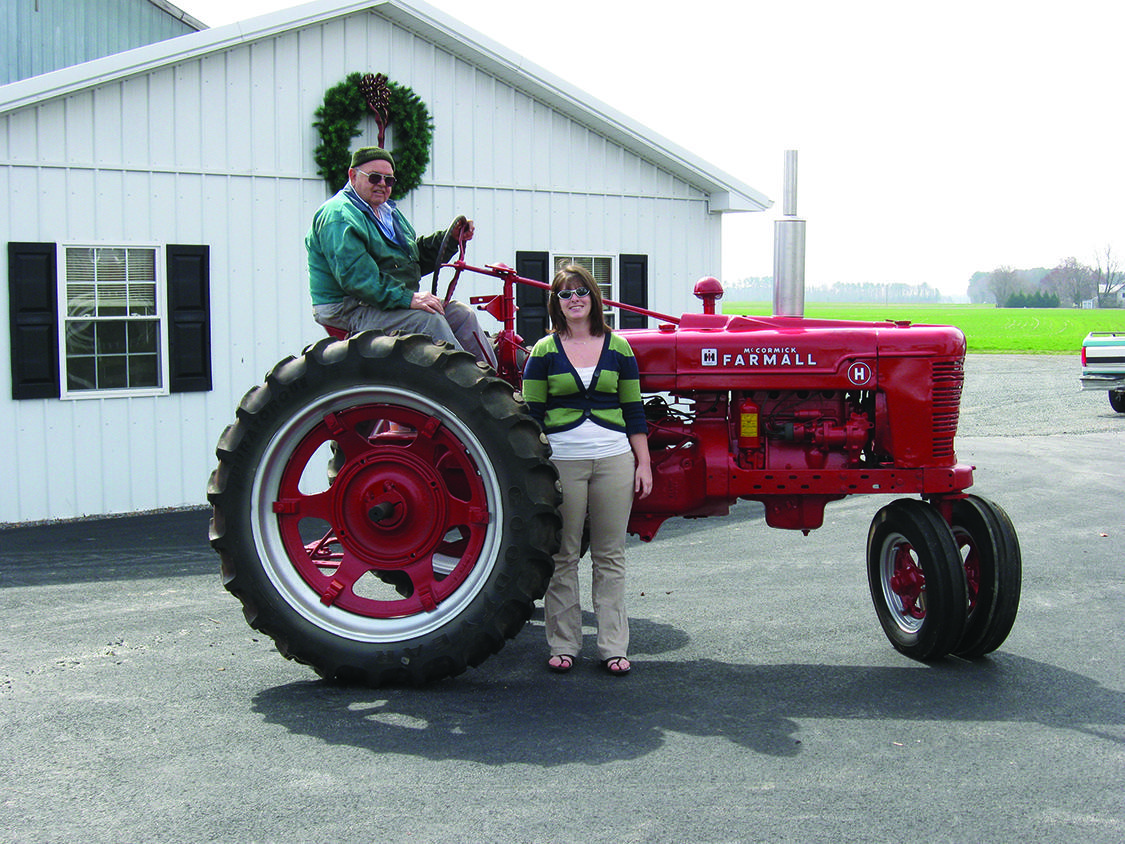 Wheatley Neal, sitting on a 1941 Farmall H first owned by his father, is joined by granddaughter Heather Clopper who works full-time on the family farm. (Photo courtesy Wheatley Neal)

FEDERALSBURG, Md. — Wheatley Neal remembers plowing with his father’s 1941 Farmall H for the first time when he was 10 or 12.
“Dad showed me how to operate it. About then, my aunt and uncle from New Jersey came down to visit at the farm, and Dad wanted to visit with them, so he asked me to go ahead and plow, and I did.”
Neal, now 84, still has that tractor, along with the first tractor he ever owned, a 1952 Farmall M. Both have been restored to glistening, running condition.
“These are the tractors I started farming with,” he said. He said he was privileged to use his father’s equipment when he started farming on rented ground while in the 11th grade. “I never traded them. I kept them and restored them.”
Most of the work he did himself, a task made easier with his background in equipment repair and welding.
Neal went to work right out of high school at a repair shop owned by Francis Trice.
His father had bought a welder when Neal was 14 and taught him welding. After 10 years with Trice,
Neal opened his own equipment repair business.
But really, he said, “All I ever want to do was be a farmer.” His farming operation, with the help of his family, has grown to 4,500 acres.
At about age 65, Neal began restoring tractors, checking four off his list.
“I had turned the farm over to my sons-in-law more at that age. I have three more to restore, maybe, if I live long enough. I work on them occasionally — very occasionally,” Neal said.
He has sold only one, a Ford, which he sold twice.
“I sold it through the Big Iron Auction Company, but the price it brought was little more than what I paid for the tires, so I contacted the buyer and bought it back — for the sales price plus taxes and credit card fees. I sold it later for $4,700. It’s now just 3 miles from here,” Neal said. “I learned a lesson: not to restore something and think I’d make money on it.”
Restoring tractors is “just a hobby, something I wanted to do,” he said.
He had worked on a lot of Fords when he had a business, for his neighbors.
So he just wanted one to restore.
He bought a John Deere to restore, but sold it before he started. “I decided I didn’t have time to work on a green tractor,” he said.
Being able to repair his own equipment is largely responsible for his farming success, Neal said.
“Guys who don’t do their own repair work are really behind the eight-ball,” he said. “That’s really been my salvation, being able to maintain my own equipment.”
He also made himself a promise that if he ever had machinery, he would have a shed to put it in when it was not in use.
“I keep that promise even today,” he said.
In addition to antique and more modern machinery, Neal has a vast collection of farm toys of all brands, mostly Case IH and Farmall, but also Ford, Allis Chalmers, Caterpillar and John Deere.