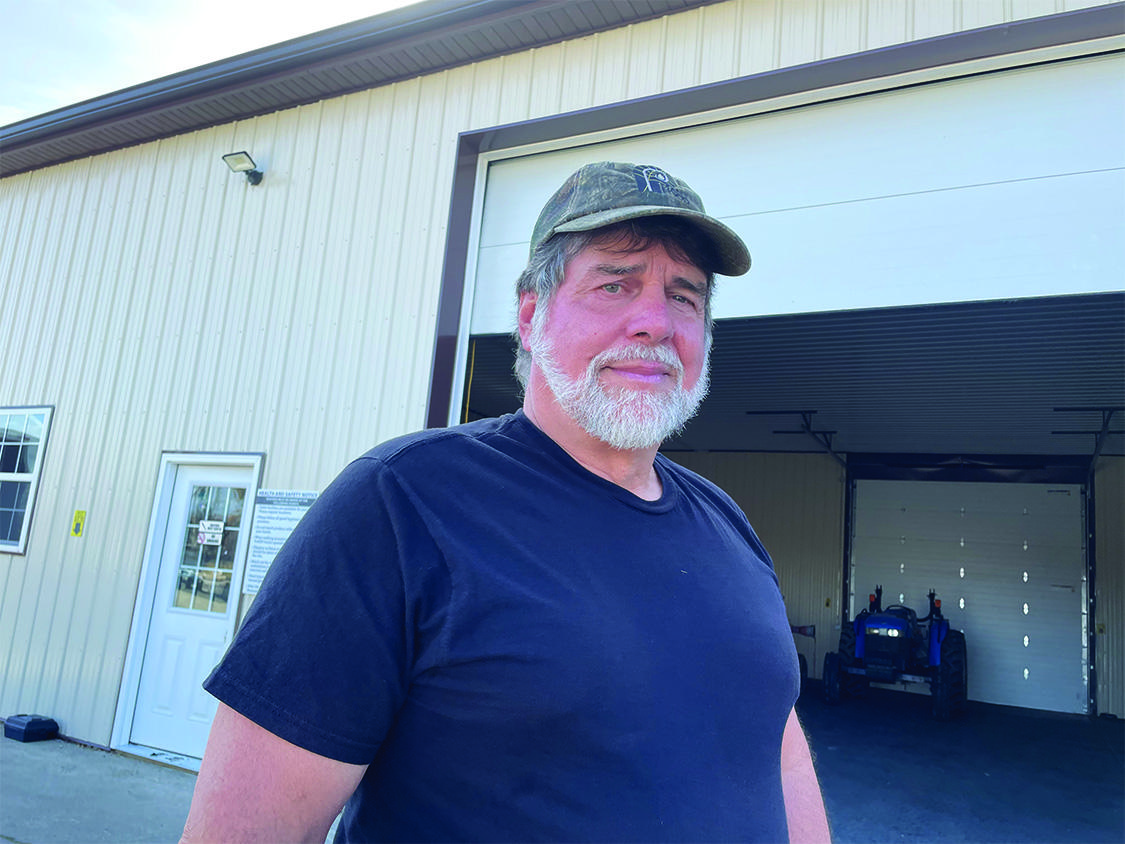 Lenny Grasso, left, stands before a newly constructed farm building that replaced one destroyed by a tornado last year. (Photo by Jonathan Cribbs)

MULLICA HILL, N.J. — Any other day of the week, Lenny Grasso would have been on the other side of the field near several buildings on his produce farm, and not at home.

“But that day, something told me, ‘You know what? You did enough today. Button up the place and go home,” Grasso said, sitting in his kitchen in South Jersey on Nov. 4. “So I did, and an hour later, it was all gone. It was destroyed.”

That was Sept. 1, 2021, when an EF-3 tornado tore through Gloucester County, leveling not just the Grassos’ operation but one of the state’s oldest nearby dairies. With winds reaching 150 mph, it was one of the region’s most destructive storms in memory and was spawned by the remnants of Hurricane Ida, which dropped once-in-a-century rains across the Mid-Atlantic.

In an instant, much of what Grasso had dedicated his life to — a 300-acre produce operation focused on bell peppers, eggplant, zucchini, yellow squash and green tomatoes — had been erased, forcing him to make a difficult decision about his future in farming. In short, did he actually have one?

Fourteen months later, with his farm boasting a newly constructed produce packing facility and a migrant labor camp, and a living room at his home still under renovation, the answer, he said, is yes. But it wasn’t always so certain.

The harvest and the help of fellow farmers and community members made that decision infinitely easier, he said. The tornado had hit the farm in the middle of harvest season. Grasso had been busy packing peppers, eggplants and tomatoes and had between 30 and 50 more days before his season was wrapped up.

“So I didn’t have anywhere to pack. You saw that packing line was — no building, no electric. We were offered by a farmer who I work with a lot — we help each other when we can — he’s huge, he’s a big grower. He said, ‘Lenny, bring your stuff to me; I’ll pack it for you,’” Grasso said.

The memory of that and similar assistance from the local community continues to move Grasso. Days after the tornado, more than 150 volunteers — many from Grasso’s past — including family and friends arrived at the farm to assist with the cleanup. The county’s board of agriculture also launched an online fundraising effort both for the Grassos and Wellacrest Farm, the neighboring dairy operation. People privately offered donations. Businesses offered equipment and other assistance. Even the Grassos’ insurer — Farm Family — was exemplary. They paid immediately and told him to keep records about any overages, which were reimbursed.

“They were great,” he said. “I had no problems with them.”

He focused first on rebuilding the farm’s four greenhouses, which was complicated by a shortage of available materials due to lingering supply chain complications from the COVID-19 pandemic. Grasso and his friends made homemade hoops for the greenhouses, and the work was completed just in time to for the farm to get transplant seeds in the ground. Bunk houses, kitchens and bathroom facilities for his labor were heavily repaired (and had to be updated to meet new codes). Grasso’s home and his father’s home had to be repaired. (The roof from a neighboring barn was thrown down the street, slamming into Grasso’s living room.) Three small tractors were totaled and two others were heavily damaged and repaired by Grasso.

He still considers himself lucky. When the Grassos stepped out of their basement to see the wreckage moments after the tornado passed, his wife had the presence of mind to snap a photo on her cell phone of the tornado’s black funnel spinning away from the farm. A local historical society featured the photo in a display on the tornado, which leveled homes across the community.

“It’s still hard for me to look at,” he said. “I get emotional because it left, and I’ll never forget thinking, ‘Look at that animal teasing us, you know, “Look what I did.”’ You give it a heartbeat or a life. You give it more than it deserves, but it’s just what it is. It’s weather. It’s a phenomenon.”

Thankfully, no one was hurt by the storms, which spawned several tornadoes in the region. Shortly after the incident, he got a call from someone who found a cardboard produce box with his logo on it in Bucks County, Pa., more than 50 miles north.

If the funnel represented nature’s potential to terrorize, the people may have represented its capacity for grace. The Grasso family was simply “overwhelmed” by the outpouring of support, Grasso said.

“There is so much good to be seen in this country, in your communities,” he said. “We tend to hear a lot about the bad. This gives you promise that it’s still good.”

It’s a goodness that revived the Grassos’ farm. He remembers, as a teenager, carving his name into the barn, which the twister toppled.

“That’s not as important as getting back on your feet and trying to persevere. I don’t know what else I would do. Farming is in my blood, but when it’s not going well it’s a blood poisoning,” he said, laughing.