Farmer sentiment down amid price-squeeze concerns

WEST LAFAYETTE, Ind. — The Purdue University/CME Group Ag Economy Barometer recorded a drop in producer sentiment in October, down three points to a reading of 121.
The modest drop was part of a three-month slide for the index primarily due to producers’ weakened perceptions for both current and future conditions in the production agriculture sector.
The Index of Current Conditions was down 5 points to a reading of 140, while the Index of Future Expectations fell 2 points to a reading of 114.
The Ag Economy Barometer is calculated each month from 400 U.S. agricultural producers’ responses to a telephone survey.
This month’s survey was conducted Oct. 18-22. 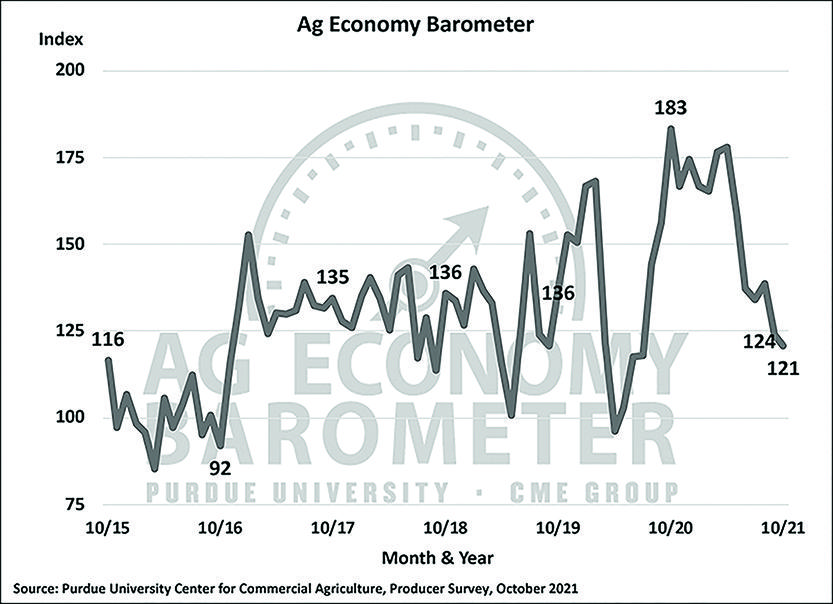 “Recent weakness in farmer sentiment appears to be driven by a wide variety of issues, with concerns about input price rises topping the list,” said James Mintert, the barometer’s principal investigator and director of Purdue University’s Center for Commercial Agriculture. “Rapid run-ups in input prices, especially fertilizer for crop production, are giving rise to concerns among producers about their operating margins weakening. Livestock producers are also concerned about a cost-price squeeze, especially in the pork and dairy sectors.”
Producers’ view of their farms’ financial situation was less optimistic in October compared to September. The Farm Financial Performance Index declined 6 points to 104 in October.
More than half (51 percent) of producers in the survey said they expect input prices to rise 8 percent or more in the coming year, and one-third of producers said they expect those prices to rise by 12 percent or more.
While the dramatic rise in fertilizer prices that’s taken place in recent months is a key factor, rising input costs also extend to other inputs such as seed, pesticides, machinery repairs and ownership costs, leading farmers to become increasingly concerned about a cost-price squeeze on their operating margins, Mintert said.
Rising input costs are starting to have a dampening effect on expectations for farmland cash rental rates. In October, the percentage of corn and soybean producers expecting higher farmland rental rates in 2022 compared with 2021 dipped to 43 percent, down seven points from September, with more respondents expecting rates to remain unchanged in the coming year.
Despite these concerns, producers remain bullish on farmland values.
The Long-Term Farmland Value Expectations Index set a new record high this month with a reading of 161, two points, while the short-term index rose one point to 156.
Tight machinery inventories continue to hold back producers’ machinery investment plans.
Nearly four of 10 respondents said their purchase intentions were impacted by low farm machinery inventory levels.
Even so, the Farm Capital Investment Index improved modestly in October, up three points to a reading of 46.
Even with that rise, however, the index was still 50 percent lower than it was at the beginning of the year.
Weaker construction plans among producers this month also weighed on the investment index as the percentage of producers planning to increase building and grain bin construction on their farms fell to 10 percent in October compared with 13 percent in September.
Over the past year, there’s been little change in producers’ awareness of carbon capture opportunities on their farms.
Just 29 percent of respondents in the October survey said they were aware of opportunities to receive payments to capture carbon on their farms, on par with survey results from last winter and spring.
Of those aware of the opportunities, just over 2 percent said they had discussed carbon capture payments with any companies, compared with 5 percent last winter and spring.