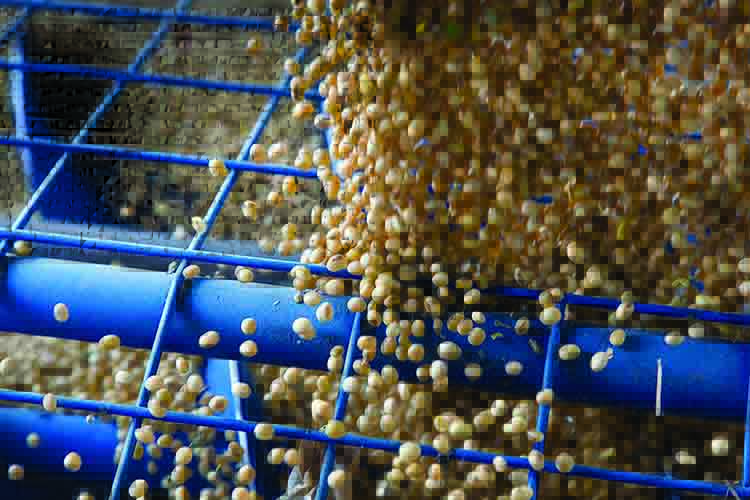 Growing high-oleic soybeans is one technique farmers in the Delmarva utilize to secure premiums beyond typical commodity pricing for field crops. (Photo courtesy United Soybean Board)

Farmers who grow field crops typically are paid prices that reflect prevailing commodity markets.
Some farmers in the Delmarva states, though, have found ways to secure premiums for some of their field crops, including barley, soybeans, and wheat.
“We work with a core group of farmers who view contracting with us to be an opportunity to have an impact and also earn a premium for malt barley above what they would typically secure from commodity pricing for feed barley,” said Zach Gaines, director of raw materials and logistics at Proximity Malt.
This firm produces premium malts from its location in Laurel, Del.; the company also has a second location in Colorado.
“We contract with farmers prior to the start of the growing season,” Gaines said.
“We strive to secure sufficient acreage to grow specific varieties of barley to supply our operations.”
Proximity Malt produces malts for craft beer breweries as well as multiple distilleries that use the malts as they produce spirits.
Farms working with Proximity Malt are typically not more than 300 miles from its facility in Delaware, he said.
“Most of our acreage is in the Delmarva states,” according to Gaines. “Approximately 75 percent of our farmers are within 100 miles of our plant in Laurel. We also have some acreage in both North Carolina and Pennsylvania. This helps us with our risk mitigation efforts by diversifying our sources of barley.”
Gaines noted that Proximity Malt “seeks the highest quality of barley. In particular, we look at several key items, including protein content, test weight, and plumpness, among other factors.
“The prices we pay for barley can fluctuate based on several variables,” Gaines added. “In general, farmers can earn significantly more by growing select varieties of barley with Proximity Malt than what they would be paid for feed barley.”
Gains said Proximity Malt is seeking to work with additional farmers in the area. “We’re looking for progressive farmers that would be willing to work with us to grow barley in Delaware, Maryland, and Virginia,” said Gaines. “In general, we’re looking for long-term partners that see the opportunities to grow.”
Another field crop where premiumization has taken root in the Delmarva states are soybeans. Buyers of high oleic soybeans typically pay farmers a premium over what farmers would get for regular soybeans.
“High oleic soybeans are used by a number of food companies as well as industrial businesses,” said John Jansen, vice president of strategic partnerships of the United Soybean Board. “The soybean oil is easier on machinery and the use of high oleic soybeans helps extend the shelf life of a number of food products. Six major businesses are purchasers of high oleic soybeans, including ADM, AGP, Bunge, CHS, Cargill, and Perdue.”
Belinda Burrier is one of the farmers growing high oleic soybeans in the Delmarva states.
Her family farms 1,200 acres in Frederick County; 109 of the acres are owned by the family, while the other acreage is leased. She’s on the Executive Committee of the United Soybean Board.
“Our goal is to start planting around April 20 depending on the ground conditions,” Burrier said. “It’s best if the temperature is 50 degrees Fahrenheit or above and there are no more hard freezes.
“We start our harvest in October and aim to finish in December.
“As trans fats were removed from many foods, we lost soybean sales,” she added. “We made it our mission to create the market for high oleic soybeans to take back market share for soybeans.”
Perdue AgriBusiness is the major buyer of high oleic soybeans in the Delmarva states.
“We’ve been able to get premiums of about 50 cents to 65 cents per bushel, though the premiums are reduced on occasion,” Burrier said. “In some cases, we deliver the soybeans to the Perdue plant in Salisbury, Md. In other cases, we store harvested soybeans at our farm.”
Farmers in the Mid-Atlantic states are growing high oleic soybeans on about 600,000 acres, Burrier said.
“We hope to break one million acres in the region,” she said.