Farmers’ market season will feature modifications due to pandemic 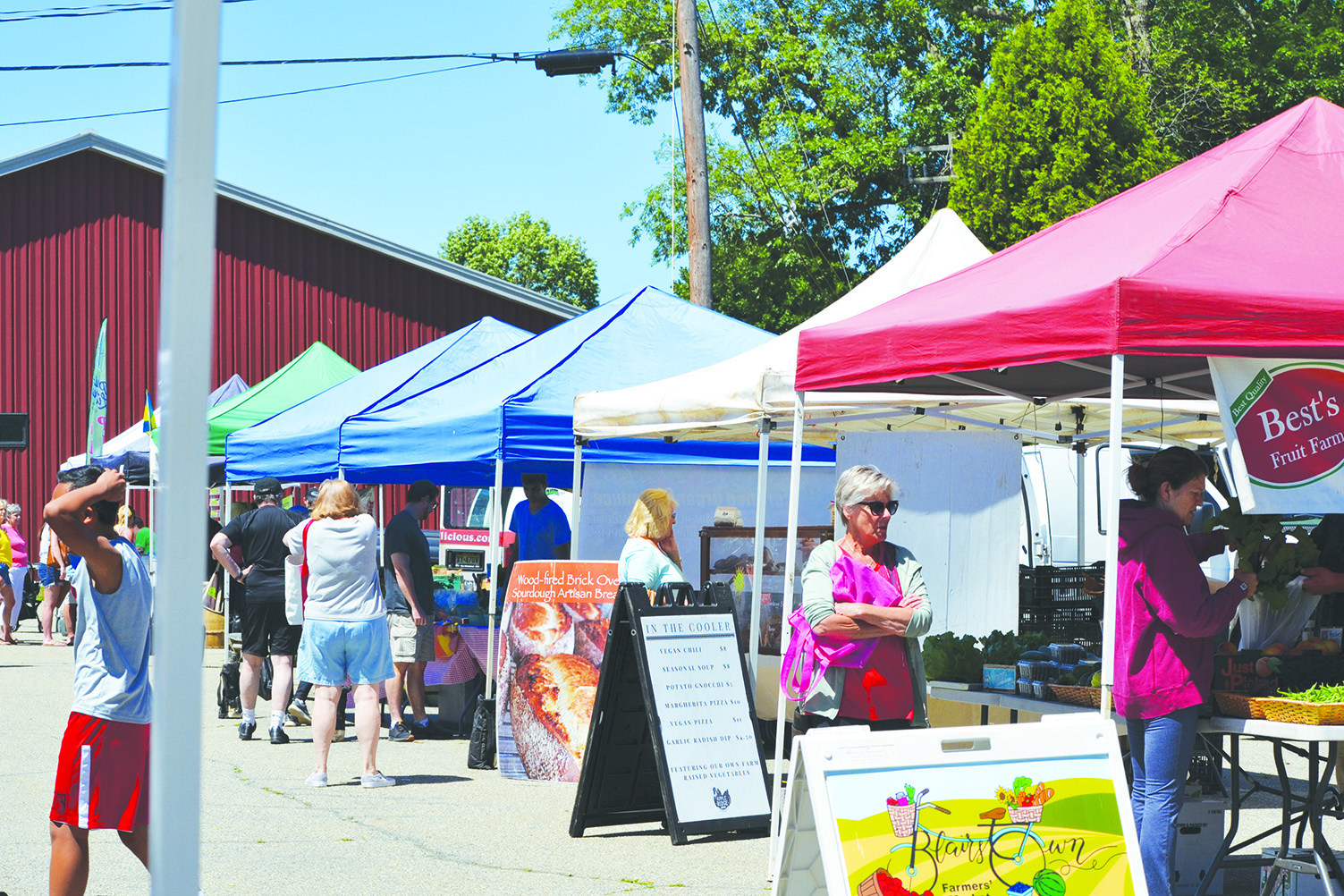 The Foodshed Alliance’s Blairstown Market is scheduled to open its season on June 6, but it will have a much different look than it did above with safety measures in place because of the COVID-19 pandemic. (Photo by Jane Primerano)

SPARTA — The farmers’ market season kicked off on Saturday, May 16 — modified for the pandemic, but still on schedule.
“We’re treating this season like a trial run,” Ben DelCoro, manager of the Sparta market said.
The market opened with eight vendors and will expand to a total of 18 later this mionth.
“We start early,” Del Coro said, noting this year when people are feeling cooped up that is particularly good.
“Farmers in Sussex County aren’t only about produce,” he noted. They keep bees, raise livestock and are able to sell products all year round. DelCoro runs Fossil Farms in Boonton and supplies exotic meats such as ostrich and buffalo.
Sparta is in its ninth year, he said. Originally in the township municipal building parking lot, the market’s success was creating a problem for the police to get in and out. The next stop was the Middle School, finally it settled in the parking lot of the Sparta Wellness Center.
The Blairstown Farmers Market is opening Saturday, June 6, to a grateful community, according to Kendrya Close, executive director of the Foodshed Alliance which manages the market. She said customers of the market have been hoping it opens.
Following state guidelines, Blairstown will have one-way in and out. Vendors will be asked to provide a six-foot barrier beyond their tables, created either with another table or some sort of roping.
They will also have hand sanitizer available.
The farmers will all be back, Close said, but not all vendors will. The vendors who sell prepared food don’t have staff to handle a market.
There will be entertainment opening day, she said, noting the Foodshed Alliance wants to create a positive atmosphere.
A Sense of Normalcy
Washington Borough always opens its farmers’ market with a celebration, according to Melanie Thiel, executive director of the borough’s Business Improvement District.
“We’re still going to have a piece of normalcy,” Thiel said.
She said when the market opens for the season on Saturday, June 20, there will be an arts, crafts and music festival.
The downtown park where the market is held has room for 70 vendors, but 35 will be set up. All are vendors who participate in the market at various times throughout the season. Thiel said some of the vendors are artists who create jewelry or soaps and candles, another makes African-themed art.
There are eight to 10 vendors on the average week. The farmers are there weekly and other vendors arrange for a few days over the course of the season, Thiel said. One farm, Maxwell’s, will not be back.
“Bill (Maxwell) retired,” Thiel said, noting she will miss him.
“I think we have a good variety every week,” she said.
A favorite of opening day every year is Dove Environmental Services. Thiel said rather than doing a wildlife-themed craft with the children at the market, environmental educators Mike and Diana Dove will create take-home craft kits.
There will also be music, Thiel said.
Dan Hirshberg of Joe Hirsh Productions handles the music for the BID. He told his sound engineers they must sanitize the equipment between each act.
The bands were advised to bring their own microphones and to space each member six-feet apart. Six bands have been booked, including local favorite The Noble Brothers, Thiel said.
Borough Councilwoman and market liaison Josephine Noone consulted with the Warren County Health Department and the Rutgers Cooperative Extension for guidelines.
There will be one entrance and one exit and only a one-way flow.
All vendors will wear masks and gloves and there will be 10 feet between vendors. A table with hand sanitizer will be set up at the market entrance.
Close admitted she checked in with Noone before making decisions about the Blairstown market.
One market that delayed its opening was Clinton’s on May 21.
A spokeswoman for the town said since the market is on the property of the Hunterdon County Library, the managers must wait for approval from the freeholders to open.
Nearby High Bridge will not be running its market this year, according to council liaison to the market Natalie Ferry.