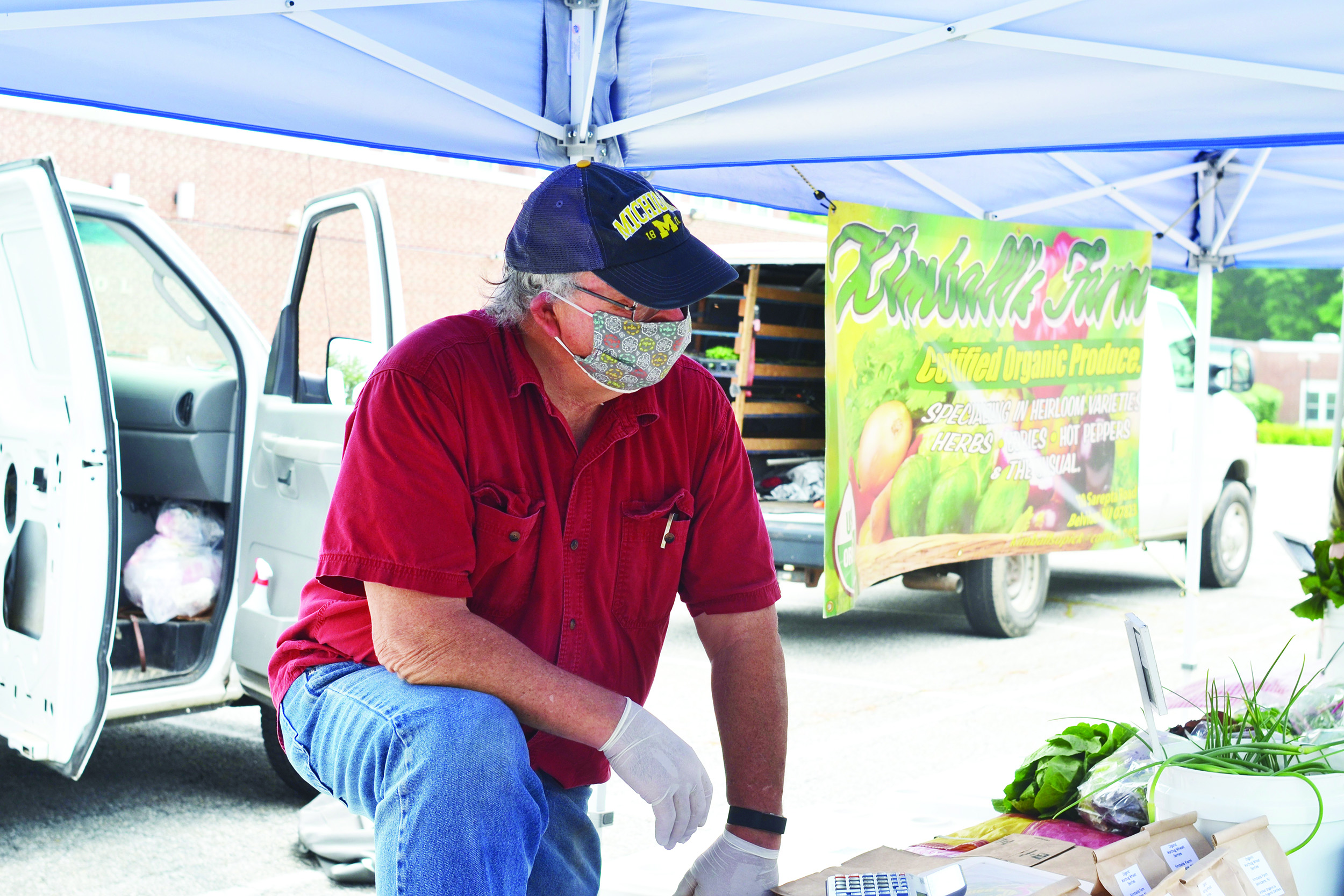 Kent Kimball mans his booth at the Blairstown Farmers’ Market, which moved across Route 521 from the fire department parking lot to the elementary school lot to better accomodate social distancing measures. (Photo by Jane Primerano)

WHITE TOWNSHIP — “I’m looking for guidance,” Marie Menegus said at her booth at the Warren County Farmers’ Market at White Township School on Sunday, June 7.
She pulled out two instruction sheets from Penn State University to Pennsylvania farmers’ markets: One for vendors, the other for customers. Each listed simple instructions to follow for safety during the pandemic.
“These are clean and concise, not pages and pages,” she said, contrasting to the way she said she believes New Jersey often distributes information.
Sunday was the first day of the county market and, although traffic along Route 46 was brisk, business had not picked up shortly after the 10 a.m. opening.
In spite of this, Menegus said “I think we’ll have a good market season. We have what people want and only I touch these vegetables.”
On Saturday, June 6, the markets in Bedminster and Blairstown began for the season.
Traffic into the Bedminster market backed up nearly to Route 206 South.
Mayor Larry Jacobs was happy for a good start to the third year of the market. He and his family and council members were directing traffic and manning the township’s tent.
The market is run by the township agricultural advisory committee and environmental commission.
Visitors were directed to walk in one direction and wear masks. Vendors were spaced apart on the large paved area.
The Somerset County Health Department inspected early that morning and signed off on the safety of the market.
Jacobs said the market has 20 vendors weekly with others coming every other week and a few “pop ups” during the season.
“There is a pent up demand among people to do something,” Jacobs commented.
It’s not just a place to shop, the mayor noted, it’s a community gathering place. Many residents bring their dogs and Jacobs’ wife, Mimi, who does the social media for the market, strolls the grounds with her Nikon taking photos of the canine visitors. She posts a “dog of the week” on Facebook every Monday. “So many markets don’t allow pets,” she commented.
The market has entertainment every week.
Vendors were doing a brisk business.
Brad Finkel of Hoboken Farms has slots in 30 markets a week.
“Farm markets are incubators,” Finkel said, explaining they are the first line of food suppliers. He calls Bedminster one of the strongest. Hoboken Farms sells mozzarella, ravioli and pastas, and bakery items.
Their pasta sauces are in 2,500 stores, Finkel said.
The pandemic has created one problem for Finkel. He can’t send large trucks with several people to each of the markets, so he is looking for more drivers for smaller vehicles.
Blairstown’s market, run by the Foodshed Alliance, moved across Route 521 from the fire department parking lot to the elementary school lot.
Foodshed Alliance Executive Director Kendrya Close said the fire department lot is going to be torn up for water line work. She’s happy with the move because it allows for one-way traffic for customers and plenty of room for spacing between vendors.
She said that the market was busy early on.
Roman Osadca of Valley Fall Farm said his sales of honey and garlic were good.
Kent Kimball who does both the Warren County and Blairstown markets is also optimistic about the season.
Close said she saw some negative comments on Facebook from people who resent being told to wear masks and social distance, but she doesn’t believe the market lost business by following public safety guidelines.