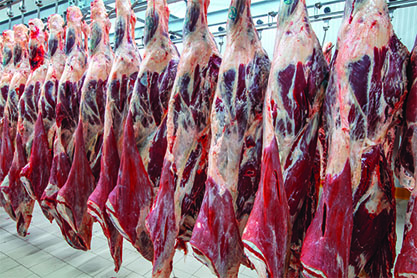 Since she opened her Sharpsburg, Md., meat processor in January, Tracy McCleary said she’s had the odd farmer approach her business with several cattle to offer them up — for nothing.

“We had a few people come in and say, ‘We don’t care what you do with them. We just don’t want to feed them anymore,’” said McCleary, the 55-year-old owner of Three Springs Meat in Washington County.

One or two were greenhorn farmers who ran headfirst into an old and persistent problem in the regional beef industry — year-long waiting lists at overbooked slaughterhouses and a shortage of USDA-certified processing — all of it magnified by the strains of the COVID-19 pandemic. McCleary said she slaughtered the animals and offered the carcasses back to the farmers for personal use.

“I just believe people were so frustrated,” she said.

For years, farmers and other parties have tried to open new processors in Maryland and Delaware only to be thwarted by a morass of government regulations, local politics, labor shortages and high costs. But over the last several months, efforts to address that shortage — McCleary included — have begun to take shape. An Amish slaughterhouse in St. Mary’s County, Md., was certified by the USDA earlier this month. A committee organized by the Delaware Farm Bureau has been meeting since January to create a series of recommendations to make it easier to build a new processing plant in Delaware or the Eastern Shore. And efforts are growing around Montgomery and Frederick counties to do something as well, whether it’s opening a new processing plant or a larger regional agricultural center that would include after-slaughter processing services.

Is it the beginning of a turnaround for the regional beef industry?

“There’s a lot of interest,” said Colby Ferguson, government relations director at the Maryland Farm Bureau. “There’s a lot of farmers that would love to find more shackle space and more options to get livestock processed.”

A committee formed by Maryland Del. David Fraser-Hidalgo, D-Montgomery, is examining potential solutions in Montgomery and Frederick counties, Ferguson said. Whether that includes working with Frederick County Executive Jan Gardner on her hopes to create a regional agricultural facility, building an entirely new slaughterhouse in the area or expanding an existing one remains to be seen, he said.

But any new meat-processing facility would face significant hurdles, such as a regional lack of skilled and unskilled labor. McCleary’s new operation is USDA-certified, but at this point it only offers custom-exempt processing for customers paying to have animals slaughtered for their own use.

“It’s a shortage of labor,” she said. “We don’t have enough staff yet, and we want to make sure we’re staffed properly with the right team of people because we are a small shop.”

She estimated her facility is working at about 20 percent of its capacity and continues to struggle to find qualified meat cutters, a trade that was often passed down across generations.

“It’s a lost generation,” Ferguson said. “There’s really nowhere to go to school around here to get a meat-science degree.”

Local politics and regulations are also likely to confront any new processing project, said Scott Barao, executive vice president of the Maryland Cattlemen Association. He said he wanted to build a multimillion-dollar after-slaughter processing facility about six years ago for his own Frederick County cattle farm, but he ran into a wall of county regulations.

“We made zero progress with (the department of) planning and zoning,” he said. “It was all over water and sewer.”

Expanding an existing meat processor will likely prove difficult as well, he said. Many of them are now hemmed in by suburban residents unlikely to support larger facilities in their backyards.

“It’s smoke and mirrors,” he said of recent efforts to expand the region’s processing capacity. “Nobody’s going to pull this off.”

Consequences of the processing shortage remain for farmers, however. Tom Barse, owner of Stillpoint Farm in Frederick County, said he lost at least $5,000 because he couldn’t get an appointment to have animals processed last year as regional plants struggled with heavy demand from farmers and plant shutdowns due to the pandemic and, in several cases, humane violations.

The Amish slaughterhouse in Mechanicsville still only sells half and quarter carcasses without critical cut-and-wrap services. The Southern Maryland Agricultural Development Commission is working to solve that and, in the short term, quickly upgrade a local St. Mary’s County butcher shop to offer those services, making local processing more attractive to Southern Maryland farmers who have long complained about long drives to distant slaughter facilities.

In Delaware, Farm Bureau President Richard Wilkins said he believes there’s great promise for another potential processor there. If work by the Farm Bureau’s committee is able to convince local governments and the state to reduce the number of regulatory hurdles or better cooperate with anyone seeking to build a new slaughterhouse or expand an existing one, more farmers are likely to join the livestock industry, Wilkins said.

Of all meat sold in Delaware, less than 5 percent is locally raised.

“We believe we could easily double or triple that with the demand that’s already there,” he said.

McCleary said she slaughters about 15-20 head a week, mostly cattle and pigs. She didn’t advertise or market her business when it opened, and she’s already booking custom-exempt appointments into next year thanks to word of mouth. She said she plans to eventually offer USDA-certified processing that would allow farmers to retail meat slaughtered at the facility.

“If I opened that portion of my business, we would be booked solid, as much as we could take,” she said.

Her customers come from as much as four or five hours away, searching for a slaughterhouse with open appointments.

“Business has been excellent,” she said. “It’s surpassed our expectations already.”