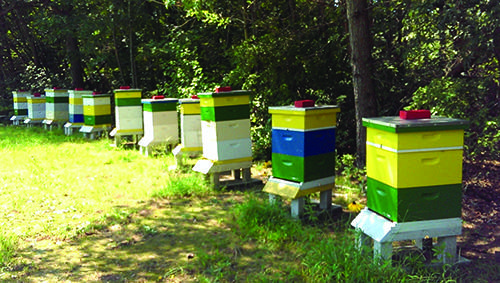 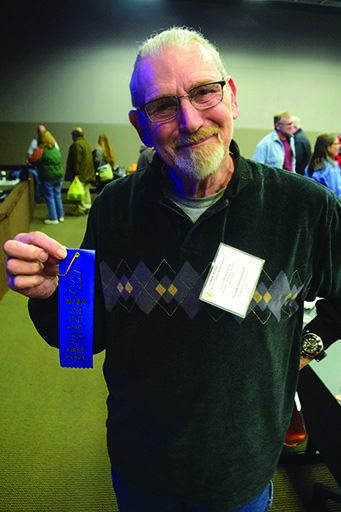 Frank Fernandez said he puts honey bee colonies on stands to help guard against major rain and snow events and prevent skunks from getting into the boxes. (Photos courtesy PJ Farms)

DEERFIELD TOWNSHIP, N.J. — Frank Fernandez served for 24 years as a member of the United States military.
Today, he operates PJ Farms, a 7.8-acre operation.
His military career began in the U.S. Army in 1968. He served for two years as a drill instructor at Fort Hood in California, and he then served for an additional two years in the U.S. Army Active Reserves.
In 1972, he began a two-year stint in the California National Guard. From 1978 through 1996, Fernandez served in the U.S. Navy. Much of his work in the military focused on boiler operations.
While in the Navy, he spent time in Hawaii, Pennsylvania and New Jersey.
After retirement from the military, Fernandez shifted to the private sector.
In 2000, he began beekeeping with two hives on his property in South Jersey.
“I love beekeeping for its relaxation, sense of need, and appreciation for nature,” Fernandez said. “In developing the farm, I used my engineering background and competitive spirit.”
The hives are placed on stands at his farm for specific reasons.
“By placing the stands off the ground, I can protect the bees from any water and snow that might impact the hives,” he explained. “You don’t want the entrances blocked for the bees because of weather conditions.”
“This also protects the bees from skunks,” he continued. “Skunks are able to protect most parts of their body, but not their bellies. To get to the bees, the skunks would have to stand on their hind legs. This would expose their bellies to the bees. Skunks don’t like that.”
PJ Farms also includes trees, bushes, and crops that support the beekeeping operations.
“The bees have a variety of sources of pollen throughout much of the year,” Fernandez said. “Oak trees are the first to have pollen available in season for the bees. Then bees are able to go over to the orchard with peach, pear, apple and other fruit trees. After the flowers from these trees, bees are able to gather pollen from blackberry, raspberry, and blueberry plants. Sunflowers then provide a source of pollen for the bees in the summer.”
The main harvest of honey comes typically in late July.
“After that harvest, the bees have the opportunity to gather more pollen from buckwheat for several weeks,” he said. “Golden rod is then available for pollen collection through October.”
A smaller harvest of honey comes later in the year.
“The honey gathered from this second harvest is darker in color,” Fernandez said. “It tastes different from the honey harvested in the summer.”
His beekeeping efforts led to him winning a First Prize for “Extracted Amber Honey” at the 2019 New Jersey Beekeepers Association Honey Show.
Beyond honey, he also sells honeycombs.
“I sell pieces of honeycombs that are about four inches by four inches,” he said. “Each slice is about 1 1/2 inches thick and weighs about 14 to 16 ounces.”
He added he has used the honey and beeswax to create his own brand of soap.
“This moisturizing soap lathers good, smells great, and is fantastic for your skin,” he said. “Enjoy the sweetness.”
At 73, Frank Fernandez has experienced some medical difficulties in recent years. But he says he enjoys his life with the bees in the country he loves.
On Dec. 31, 1962, he and his mother arrived at the Miami Airport. They had fled their home in Cuba. Two family members in California agreed to sponsor his mother and him so they could come to the United States. His father tried to stay as long as he could in Cuba, Fernandez explained, but eventually came to the United States to be with his family.
Since it was New Year’s Eve, fireworks were going off near the Airport and Fernandez reacted thinking it was gunfire.
“As a 12 year-old, I pushed my mother down and covered her to protect her with my body,” he stated.
A private in the U.S. Marine Corps saw Fernandez react and approached the boy and his mother. The Marine asked they were okay and explained the reason for the fireworks.
“That was the day I decided to join the U.S. military and serve my new home,” Fernandez said.