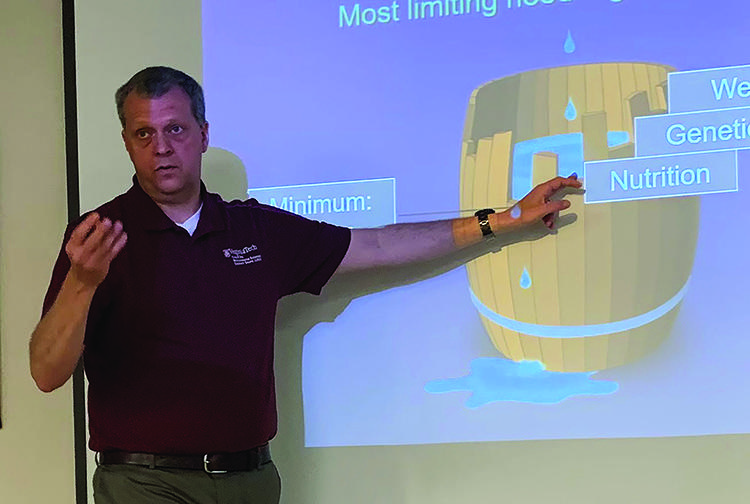 PAINTER, Va. — Eastern Shore corn farmers facing skyrocketing fertilizer prices were advised how to minimize fertilizer use and save money during Corn Specialist Day at the Eastern Shore Agricultural Research and Extension Center on March 31.
Dr. Mark S. Reiter, Extension agronomist and center director, said both fertilizer affordability and supply are questionable this year. He was one of five scientists who addressed various elements of corn production at the half-day session.
“Fifteen percent of U.S. nitrogen production is from Russia so the way the politics play out may impact [prices] even more in the future. Luckily, potash mostly comes from Canada,” Reiter said.
Every field is different, he said, but “whatever the most limiting thing in your production system is, that’s what you need to focus on this year.”
He said the limiting factor could be “water or nitrogen or sulfur or boron or manganese; it could be a microbe or genetics or weeds. Especially this year, focus on this and think about not what you’ve always done, but where you might cut costs.”
“If you shoot for 180-bushel corn, you do need a lot of nutrients; 240 pounds of nitrogen needs to come from somewhere to be in that plant system, 102 pounds of phosphate have to come from somewhere, and 240 pounds of potash.”
He stressed that those amounts do not have to be applied, but the crop has to get those nutrients “from the air, from the soil, organic matter.” He reminded attendees that reducing fertilizer is a short-term fix and that this is the year to “mine” the nutrients already in the soil.
Soil testing every two or three years is the best tool for determining what nutrients are needed; preferably to a depth of 18 inches, Reiter advised.
Good yield records also establish what actually can be achieved on a given field “versus what you hoped to get on that field,” he said.
He noted that soils on the Eastern Shore generally have high concentrations of phosphorus so “it’s okay not to put out phosphorus fertilizer this year in some of your fields. If you are testing low, very low or medium, we do expect to see a yield response from applied fertilizer,” he said. “If you’re high or very high for phosphorus, you don’t need to put on phosphorus; you’re good.”
Reiter explained there is a lot of potassium in the soil, depending on the depth of the hardpan, that corn plants can mine. Potassium and sulfur build up down through the soil profile, making it more available to deeply rooted plants such as corn.
Phosphorus is different, he said, “most of it is in the top inch if you’re in a no-till system. It generally doesn’t move down through the soil.”
He cautioned, however, that total phosphorus doesn’t mean it’s all available. Only available phosphorus can be mined by the crop.
Reiter called lime the Achilles heel of nutrient management.
“Please lime. You can’t fix it. Once your corn is knee high and you’re seeing aluminum toxicity, you’ve already seen significant yield reductions,” he said.
Reiter cautioned those growing corn in rotation with plants that like low pH that corn will experience aluminum toxicity at pH of 4.8 to 5.0. Also, phosphorus is most available at a pH of 6.0. He also cautioned that too high a pH can create an issue with manganese, especially in soybeans.
Growers can save money on nitrogen by split applying it with about 50 pounds up front and the balance when the plants are knee-high, he said.
Drought is another limiting factor. When corn is planted on dryland, Reiter said an early drought will cause a five- to 10-percent yield reduction. If that occurs this year, “this might be a good year to back off 10 percent on that second nitrogen application because the damage has already been done.”
He also said this is a good year to use a Pre-Sidedress Nitrate Test, especially if poultry litter has been applied to the field. According to NRCS, the test measures nitrogen released and made available to plants by microorganisms feeding on organic matter and crop residues in the soil. This nitrogen can be mined by the crop and reduce the amount of fertilizer that needs to be applied. Cost share may be available for the test, Reiter said.
While mining nutrients available in the soil can save costs this year, Reiter cautioned that mining depletes the soil and is not a long-term solution to input costs.