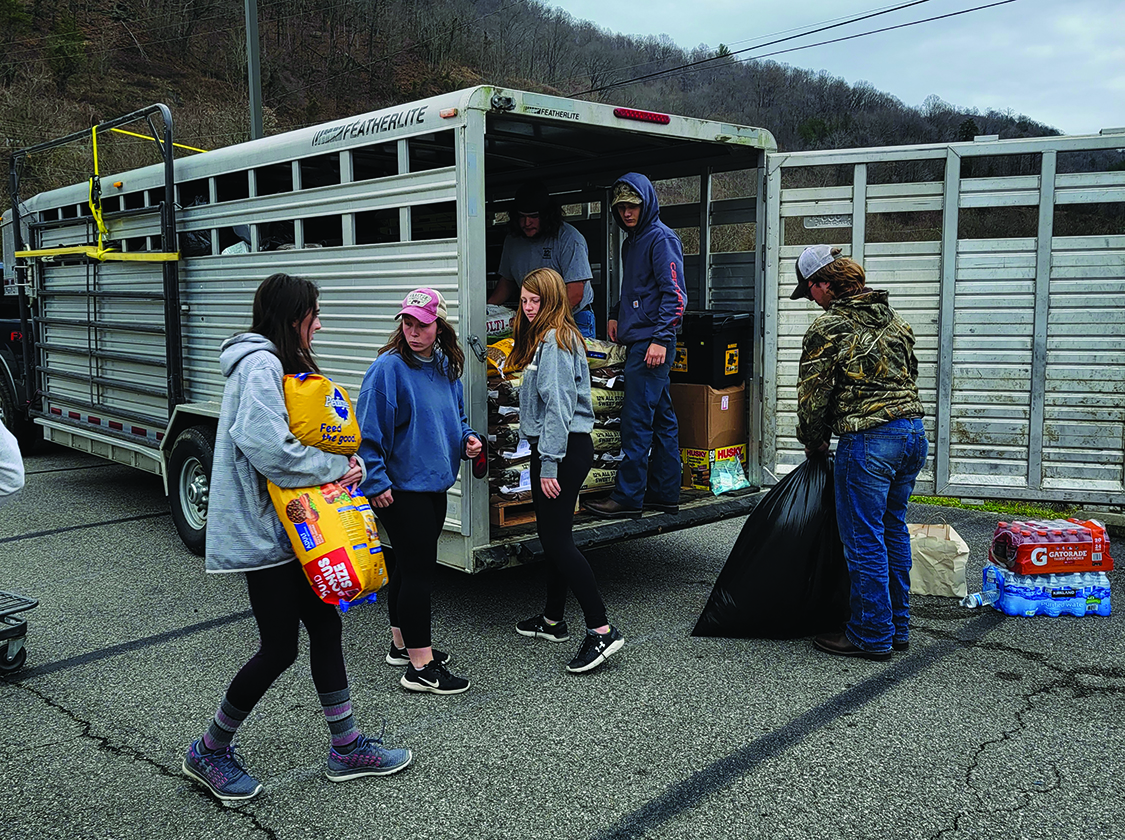 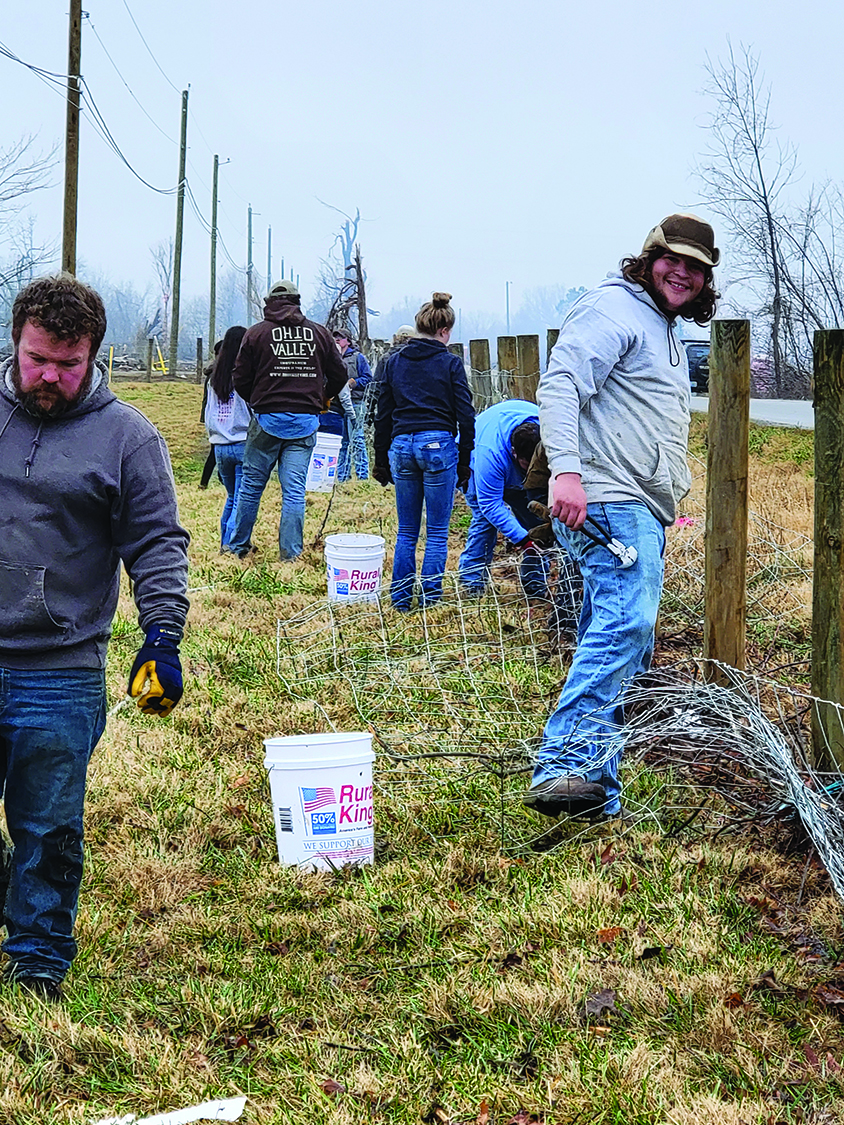 Replacing fencing for a Kentucky farmer was one of the tasks a group of Maryland FFA students took in traveling to a tornado-ravaged area of the state. (Photos courtesy Stacy Eckels)

In recent years, the FFA Chapter at Southern High School in Anne Arundel County, Md., has been part of several local service projects, but their largest and most recent effort was for people hundreds of miles away.
After the tornados plowed through Kentucky on Dec. 13, chapter treasurer Katelynn Bullock, whose grandparents live in Kentucky, brought the idea of fundraising for impacted farmers to the group.
“They were all on board with it, it was just a matter of how do we do it,” said Dr. Stacy Eckels, agriscience instructor and FFA advisor at Southern High School.
The next day the chapter met and decided they wanted to raise money and send supplies directly to farmers and specifically to an agriculture teacher who lost his home.
“They understand the importance of the ag teacher in the community and wanted to help him specifically,” Eckels said.
The chapter partnered with its alumni group and local garden center Homestead Gardens to get donations of cash and supplies to send to Kentucky. While the tornadoes touched down in eight states, Kentucky bore the brunt of the storms, which destroyed more than 1,000 homes and killed at least 74 people.
Chapter president Jacob Bjernkes said their initial goal was to raise about $3,000 for a skid steer attachment post puller. The attachment would help greatly in clearing fields of debris, he said. The force of the tornado drilled tree limbs, wood and other debris several feet into the ground and the post puller would reduce the manpower needed to pull them out.
Within a week they raised over $35,000 in money and in-kind donations of supplies.
“It just kind of exploded,” Eckels said.
As the fundraising got underway, Bullock pitched the idea of traveling down with the supplies and working in the cleanup effort during their winter break and several members jumped at the chance, some even forgoing a planned ski vacation. In total, the chapter’s seven officers signed up for the trip, accompanied by three chaperones.
“I felt that helping the people out there would be a life experience unto itself,” Bjernkes said.
The trip was not affiliated with the Southern FFA Chapter and the teens traveled independently.
The day after Christmas, the group met at Homestead Gardens to load supplies into a livestock trailer and the next day they left for Muhlenberg County, Ky.
In the three full days the group spent helping, Eckels said they amassed more than 200 hours of work.
“It was sunup to sundown,” said Bjernkes. “It really goes to show when you get a bunch of ag kids together, how much can happen.”
Much of the group’s work on the trip was spent clearing fields of debris, from tree limbs to trusses.
Getting fields cleared as soon as possible was important especially those with crops already planted.
“If the debris wasn’t picked and the wheat got tall, you’ve never see it,” Eckels said. At harvest time this summer, the debris if left would damage equipment.
For one farmer, the Maryland group helped move about a half-mile of livestock fencing after the local utility company reset its utility poles inside his pasture. The group also purchased 300 posts for the fencing project and were there when they were delivered, Eckels said.
“He was in tears when he shook my hand,” Eckels said of the farmer accepting the posts.
Eckels said many of the connections the group made for aid were through the county’s Extension ag agent Darrell Simpson, who Eckels said was constantly coordinating help among farmers, volunteers and others during the group’s time in Kentucky.
“I’ve lived in four states, I’ve never seen an ag agent as involved as Darrell was,” Eckels said.
Eckels said she also was impressed with her group’s emotional strength in seeing so much destruction but staying focused on the work at hand.
She said she asked the group not work around any home sites, worried it could be too overwhelming for the youth. But on their last day in Kentucky, the group was working in a field where a mobile home was blown into and while the group started clearing the field away from the mobile home, “the kids kind of flocked to the home site. Emotionally, they handled that really well.”
Bjernkes said seeing farmers and others put their neighbors’ needs above their own in the cleanup gave him a good perspective and a lot of gratitude for what he has in his own life.
“I think it was an amazing experience,” he said. “It really goes to show it can always get worse but there’s light at the end of the tunnel. I really found that inspiring.”
The group returned to Maryland on Dec. 31, returned to school a few days later and during discussion about the experience in class, Eckels said the students were reluctant to accept praise for their effort and were concerned about what else they could do.
“We left and there’s so much more to be done,” Eckels said. “I really think they’d go back or would have stayed there if they didn’t have school. It’s still very much a disaster zone.”
A Register Roundup program at Homestead Gardens locations where customers can opt round up their purchase to the nearest dollar to go toward the relief effort goes until the end of January.
And the Southern FFA alumni is still taking donations through givebutter.com. (A direct link is available here.)