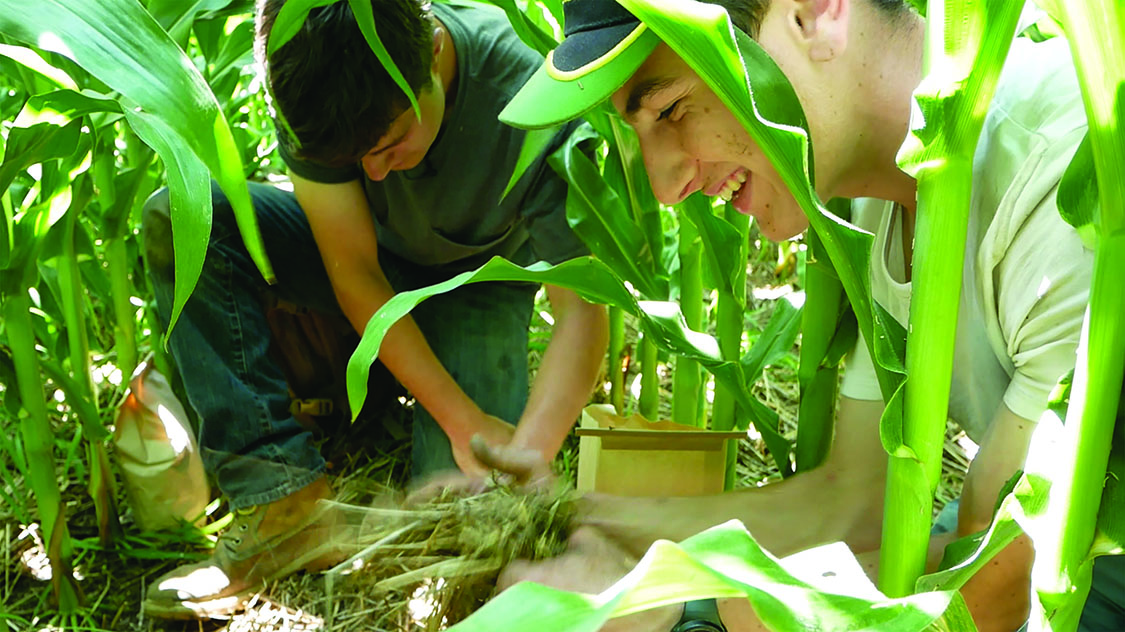 Boys at Harborview Farms in Rock Hall, Md., do cover-crop research in their cornfield in the summer of 2019. (Photo courtesy Karrah Kwasnik)

DURHAM, N.H. — Several Delmarva growers and their environmentally conscious farming practices could make their big-screen debut next year, thanks to the USDA.

Three regional farms — two from Maryland, one from Delaware — are the subjects of a new feature-length documentary called “Delmarva and the Ground for Change,” a product of the USDA Northeast Climate Hub in New Hampshire. Karrah Kwasnik, the documentary’s director, made the film to highlight the Delmarva region’s commitment to farming practices that boost soil health. The region’s embrace of such practices, including no-till farming and cover crops, is unique nationwide.

“We know in Maryland and Delaware, farmers are leading in practices compared to the rest of the U.S. in cropland acres,” she said. “All the farms are very attuned to the environmental issues but also just being stewards of the lands.”

Through a grant-funded partnership with the University of New Hampshire, Kwasnik is the digital content manager at the Northeast Climate Hub, one of several regional hubs nationwide that produce information and technology for agricultural and natural-resource managers to help them make informed decisions in the face of climate change. Her documentary features Harborview Farms in Rock Hall, Md.; Fair Hill Farms in Chestertown, Md.; and Deerfield Farm in Lewes, Del.

The documentary is her first, and discussions about creating it began in 2019 as a good use of unspent grant money. (The film ultimately cost about $9,600.) In addition to featuring Delmarva growers, Kwasnik also wanted to produce a film that could reacquaint people outside the farming community with efforts inside of it to promote sustainability — and detail what life on a 21st-century farm actually looks like.

“I don’t think people are used to seeing that,” she said. “Hopefully, these farms can help address that gap.”

After deciding to begin the documentary project, she was directed to the farms through recommendations and introductions by Delmarva connections in academia and conservation. She also wanted to make something that applied to the entire nation, which eliminated smaller, consumer-facing farm operations such as CSAs.

Harborview Farms, owned by Trey Hill, is a corn, soybeans and wheat operation across more than 10,000 acres. Among the reasons for its selection: 100 percent of its cash crops are “planted green”, which means they’re planted into a live — not desiccated — cover crop. It’s consequently all no-till. It’s a system promoted for improving soil health and protecting crops from extreme weather, but it also fights climate change by sequestering carbon into the soil.

Matt and Megan Fry of Fair Hill Farms, which transitioned their conventional dairy of about 600 milking cows to USDA Organic in 2016, farms about 1,400 acres, which include 300 acres of permanent pasture and 60 acres of cool- and warm-season annuals. The decisions have yielded a number of benefits on the farm, including topsoil preservation. They also harvest their cover crops as feed for dairy.

Laura and Roland Hill Jr. at Deerfield Farm employ no-till farming across their corn and soybean acreage, part of a sprawling 1,800-acre poultry and grain operation. The farm also grows vegetables. All of it helps the farm utilize its own poultry litter, reducing the need for synthetic fertilizer. Kwasnik also points out the farm’s underground drip irrigation system, which conserves water and reduces weed populations by targeting crops at the root.

The documentary focuses on its farms’ experiences with soil health. Kwasnik shot the film over three trips and 24 days in the summer of 2019. The project’s editing and post-production efforts — much of it completed at home during the height of the pandemic — lasted an entire year. There was 74 hours of raw footage. The enormity of it surprised Kwasnik.

“‘Ignorance is bliss’ defines everything. I didn’t know how big of a project I was getting into, which is probably good,” she said. “It’s been very challenging. I’m really glad I did it.”

The film’s release is still under discussion, she said. It could be available this spring. She hopes it exposes viewers to farmers who prioritize the soil and the environment.

And while the Delmarva region leads the nation, it has plenty of room to improve, she said: Just over half of Maryland’s cropland acres are no-till.