Finney won’t back down to challenges 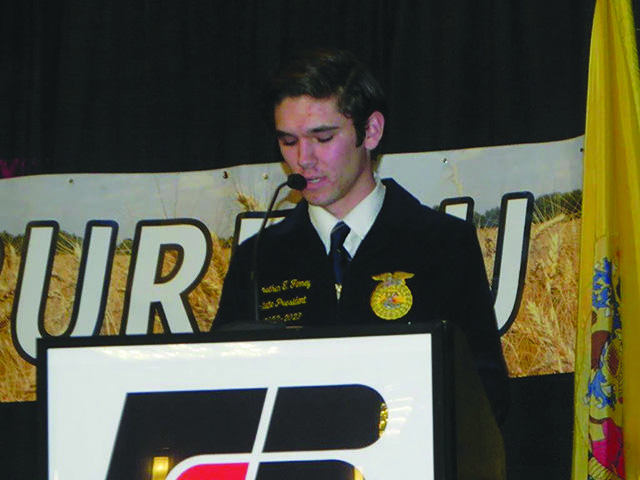 New Jersey FFA President Jonathan Finney said he has used his time as FFA president to take advantage of countless opportunities to grow as a leader and an agriculturist. (Photo by Richard Skelly)

WEST WINDSOR — In what was a very challenging season for many Garden State farmers, New Jersey FFA President Jonathan Finney spoke about how taking chances has helped him find new opportunities to farmers gathered at the New Jersey Farm Bureau’s annual meeting.
“Agriculture is a profession with a lot of chances and opportunities,” Finney, of Mannington Township in Salem County, told the crowd.
“Agriculturalists are constantly taking risks to improve their operations while simultaneously being subjected to outside forces beyond their control. Whether they are experimenting with new equipment or riding out unexpected weather, agriculturists are constantly struggling to improve the balance between what they can control and preparing for what they can’t [control]” Finney stressed.
Finney said he has used his time as FFA president to take advantage of countless opportunities to grow as a leader and an agriculturist. In 1993, his grandfather established Mannington Meadows Nursery, and Finney said he began working there in middle school.
His grandfather, he pointed out, “kept pushing through his challenges, as failure simply wasn’t an option. It took him eight years to finally break even with the nursery. All that hard work could have led my grandfather to abandon his goals and search for work with more stability for his family, but when he looks back now, he can see that he has built a successful business that supports not only himself but numerous workers.”
Recognizing the risks and the necessity of taking the opportunity, “he succeeded in his endeavors and has built a business that is sustained to this day,” Finney said, recalling how he would go to his grandfather’s house every day and spend hours working in the nursery during summer months.
“At the end of 8th grade I still had no idea what I wanted to do with my future, but eventually I decided to take a chance and attend the Salem County Career and Technical School for their agricultural program,” he said. “This would prove to be an extremely important decision for me to make. I may not have had any control from not being raised in a family of agriculturalists, but I did take advantage of the opportunities that were presented to me and that led me to where I am today.”
“Throughout my five years as an FFA member I’ve been given countless opportunities and chances to grow myself and those around me,” he said, citing trips FFA New Jersey made to big farms in California and three separate trips to Indiana for the national FFA Convention.
“For a small town, south Jersey farm boy, these were some huge opportunities that came with more than just a few risks, but taking advantage of these opportunities to travel and have new experiences has been honorable. The most impactful FFA experience for me has been the last year and five months that I have been president and served as a state officer for the New Jersey FFA Association. With this once-in-a-lifetime opportunity I have taken more risks and tried more than I thought possible. I have traveled all over this great state and interacted with students and educators hosting workshops, competitions, and trainings, all while building connections and developing new friendships that will last a long, long time.”
While his grandfather’s Mannington Meadows Nursery is currently a wholesale operation, after he completes college, he and his grandfather have a pact that he will plan to open a retail arm of the business as well, offering flowers and vegetable plants.
“With knowledge and skills I have gained through FFA, I believe I will be able to be successful in my endeavors.”
He credited his parents with helping him reach his decision to attend the agricultural high school in Salem County — and what he thought of at the time as a huge risk — has paid off.
“Because I took that chance I was able to travel the country and serve the nearly 3,000 New Jersey FFA members while simultaneously growing myself as a person and as a leader in developing critical skills,” Finney said. “FFA has shaped me into the person I am today, and continues to do the same for students across the state and across this glorious country. Because of the FFA — I as well as many other people — have the passion and skills that will allow us to become the next generation of agriculture. I appreciate more than you know the support that you give to New Jersey FFA.”