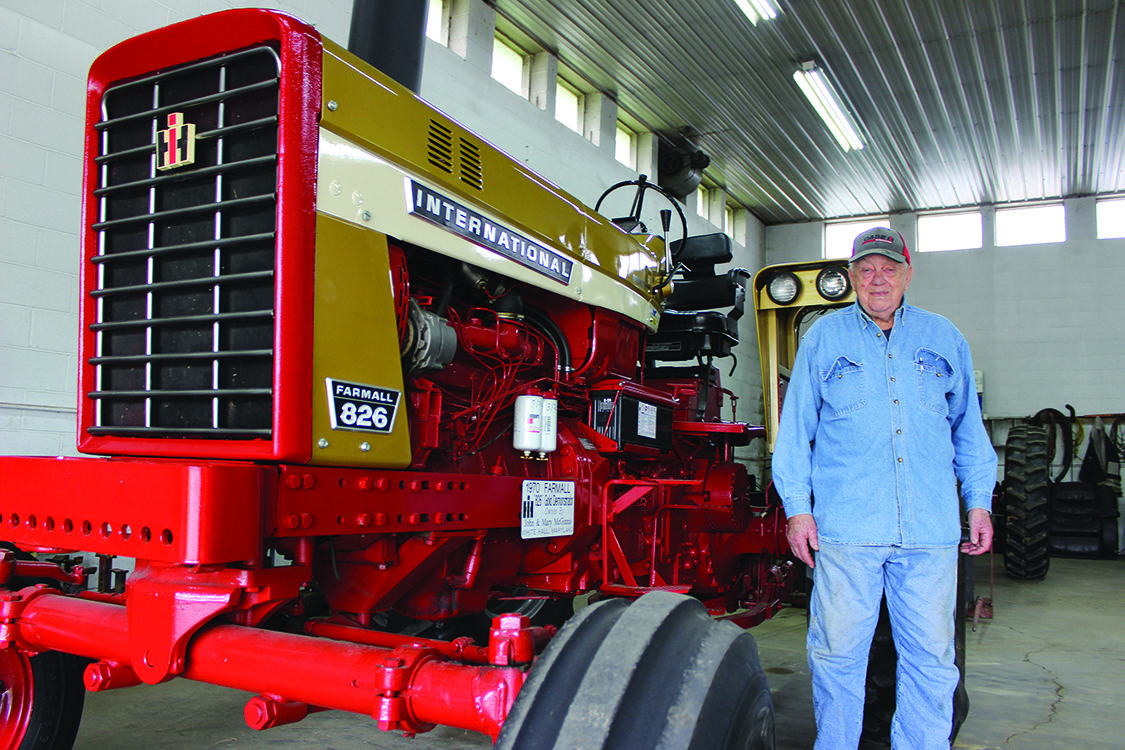 John McGinnis said the look of the 1970 IH Farmall 826 Gold Demonstrator didn’t factor in to him buying it. “I just needed a tractor and that was it,” he said. (Photo by Sean Clougherty)

WHITE HALL, Md. — Sitting comfortably in his farm shop, John McGinnis, 82, points to the two tractors — a 1960 Farmall 560 and a 1970 IH Farmall 826 Gold Demonstrator — resting end-to-end along the opposite wall.
“Those tractors are the reason I’m where I am today,” he said.
McGinnis grew up on his family’s farm and started sharecropping with his father, John T. McGinnis, in 1959. Then a Farmall F20 and a two-horse planter was their main equipment, but John the son said changes needed to be made.
“After one year of that, I said, ‘That’s it.’” The next year, he bought the Farmall 560 and a John Deere 4-row planter, helping him cover more ground quicker.
“That was the first diesel around this part of the country,” McGinnis said of the 560. “Five hundred hours a year wasn’t nothin’ for that tractor.”
By 1970, McGinnis had grown the operation substantially and he needed a larger tractor but didn’t think he could afford it.
His International Harvester dealer, Sam “Mose” Spicer at S.S. Spicer in New Freedom, Pa., knew he needed it, too, and repeatedly made overtures about the 826 Demonstrator he had on the lot.
Finally, McGinnis accepted. The unique gold paint scheme didn’t interest him necessarily, only that it could do what he needed in the field.
“I just needed a tractor and that was it,” McGinnis said. “(Mose) said, ‘You’re taking that tractor home. Pay me when you can.’”
McGinnis said he didn’t get a bill of sale or have to get a bank loan; “People trusted each other back then.”
In that era, demonstrator models were designed as promotional tools to show farmers the capabilities of the new models. Dealers loaned the demonstrator to farmers to use in their fields or set up special events to showcase the tractors in the filed.
But Spicer apparently only had one user in mind.
“It had one hour on it,” McGinnis said. “He didn’t demonstrate nothin’.’”
The 90-horsepower 826 helped McGinnis increase capacity even further, pulling a 20-foot disc instead of a 10-foot disc with the 560 and upgrading to a 12-row planter, custom made by a newly-formed Shoup Manufacturing in Kankakee, Ill.
“I run that planter for 24 years,” he said and then laughed. “I got the planter, they got the patent.”
After demonstrators were sold, they were supposed to return to the dealer to be painted in the tradtional IH red color, but McGinnis kept his on the farm to work.
“That was the workhorse,” McGinnis said of the 826, which had a M&W turbo charger added in 1972. “It run everyday, all drawbar work.”
In the 1980s, a fire in the shop damaged the tractor’s left side and while it was at Hoober Inc., in Intercourse, Pa., for repairs, it also got a fresh coat of red paint.
Years later, after seeing another gold demonstrator featured on RFD-TV, McGinnis and his wife Mary agreed to get their 826 restored to its original gold luster.
Jerry Murphy in Ijamsville, Md., agreed to do the job but wanted to make sure it was exactly like it was before the fire. He said a lot of demonstrators on the show circuit are painted a variety of ways, which calls into question their authenticity.
“It’s just a novelty thing to have one,” Murphy said. “They do bring a little more and there’s a lot of people faking them.”
Murphy said there’s no serial number list of demonstrators to match up to and it’s unknown how many were made.
“Some say every dealer got one — have no idea,” he said. “There’s very little to be known about them.”
Fortunately, Mary had saved photos she took of the 826 the day John brought it home. The photos not only proved the tractor was a demonstrator but also helped guide Murphy’s restoration.
“Those pictures are worth all the money in the world,” he said. “It showed you where Harvester put everything.”
Murphy took on the project in the spring of 2014 and had it ready to unveil at a show by May at Gladhill Tractor in Frederick, Md., a John Deere dealer.
From that show, Murphy took the 826 to another show, and another, capturing constant attention at every stop.
“You couldn’t leave the tractors” at a show, John said, because someone was always coming up to look and ask questions.
Murphy said he lent John one of his own tractors during hay season so he could take the 826 to as many shows as he could get to.
“(John) named it the ‘Trailer Queen. It just stayed on that trailer,” going from show to show, Murphy said. “We had a lot of fun that year.”
Shortly after the 826 was restored, John sent the 560 to Murphy for restoration, although John noted with pride that the tractors had stayed in good condition over the years, getting cleaned regularly.
“We worked for this stuff,” he said. “We didn’t beat it up.”
Both tractors still earn their keep on the farm, moving hay bales, pulling wagons and other tasks. John said as his farm grew — at one point he managed 3,000 acres — he traded in equipment for larger models to continue to cover more ground faster, just as he did in getting the 826, 50 years ago. But his first two tractors stayed.
“We just kept them,” he said with a grin. “They were always doing something.”