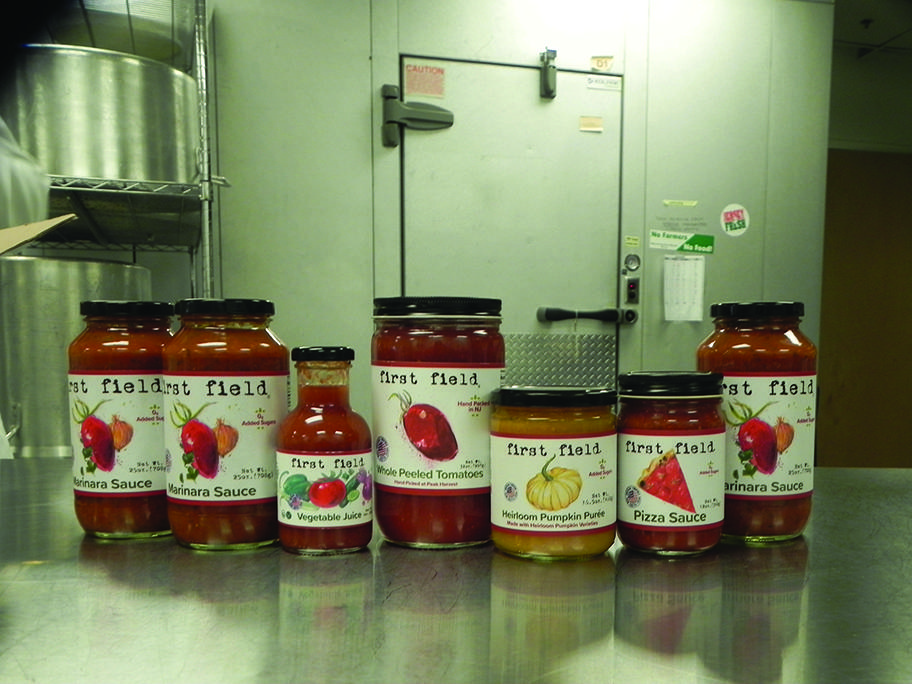 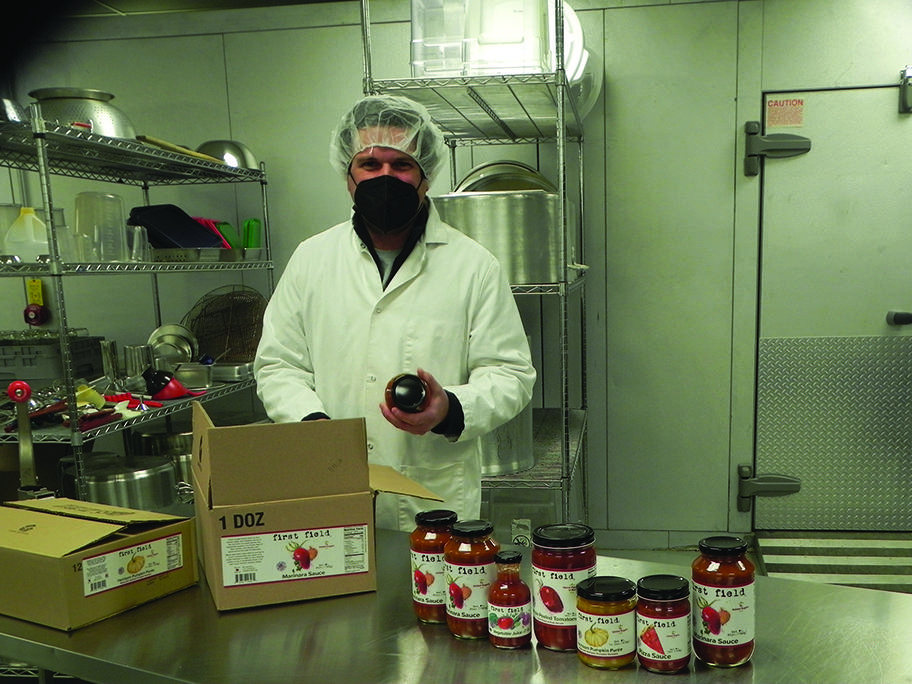 WINDSOR — Patrick Leger and Theresa Viggiano of First Field have learned volumes about managing growth these past few years.
The owner-managers of the company now have major supermarket clients and have expanded their shipping channels and product lines to include a lot more than just ketchup, which was how the company was launched.
Now, the still-growing small business has expanded into its own commercial kitchen and warehouse space at the Windsor Business Park on Route 130.
“This space became available, and we’d always been looking for a production space, a commercial kitchen to do smaller runs of things,” Leger said.
“This way, the farmers can pull right up to this ramp here and unload pumpkins or other stuff, and then we do the processing right in the kitchen in back.”
First Field’s product line has greatly expanded from what it was just a few years back.
Now, the company offers concentrated tomato juice and cans of crushed tomatoes as well as things like pickle relish, blueberry jam, strawberry jam and pumpkin puree, which can be used with pasta as a substitute for First Field’s already popular marinara sauces.
Their new warehouse and processing and packaging space also makes it possible for customers to pick up their orders at the Windsor Business Park.
“We use the forklift to bring a whole pallet of stuff back to the warehouse and then we ship it,” Leger said, “it’s a little inefficient because all our spaces are not contiguous, but it’s a great space and I have to credit my wife Theresa, our general manager Russell Cavallaro, and also Zoe Castro who works here in the kitchen with us.”
First Field ships to Whole Foods and other outlets from its warehouse-trucking dock space a short distance away within the park, comprised primarily of office space. Leger explained the Whole Foods account began years ago with the company’s distinctive ketchups, but lately the company has been attracting more individual fans via word-of-mouth, a good website, and a presence at places like the West Windsor Farmers’ Market.
Right now, Leger said there’s a supply chain problem that’s preventing taller bottles for concentrated tomato juice from arriving from Italy. First Field also sells cans of crushed tomatoes to Whole Foods, as well as the taller bottles of concentrated tomato juice.
“The marinara is also a big seller, and we also make a spicier sauce,” he noted.
Leger credited farmers such as Joe Leone in Swedesboro, Ray Hlubik in Chesterfield and Tim Haynes in Pemberton as some of the partners in suppling him locally-grown produce for his products.
“At Joe Leone’s farm we have a test plot where we are continuing to test seeds developed with [Rutgers] professor Tom Orton, and he’s been very close to our business,” Leger said. “The idea is to use more open pollinated seeds for processing tomatoes, so we have a trial site at Joe Leone’s Farm to see how they work and how they continue to be climate change adaptive as well,” he said, adding open pollinated seeds are meant to breed true for the next generation.
When it comes time to harvest tomatoes at the test plot, he added, “everyone gets involved as we’re picking these by hand for the open pollinated seeds.”
“That’s what their forefathers did on these same plots of land they saved their seeds,” Leger said, adding too few companies control 90 percent of the world’s seed supply.
Aside from Leone, Leger was quick to credit large farm families in southern counties who grow processing tomatoes and all manner of other vegetables, such as the Bitingers, the DuBoise family, and other large producers, adding those flat fertile south Jersey fields “is what we call the Napa Valley of tomato growing.”
After experiencing the rigors of growing their own tomatoes, “we then adopted more of a partnership model. We became partners with New Jersey farmers, big tomato growers, the guys that are the real pros in southern New Jersey.”
Leger also was very insistent that his role at the company was as a helper to his talented wife, Viggiano a marketing wizard with advanced college degrees and a sophisticated palate.
“It’s really her baby,” Leger said. “I move stuff around and I deal with deliveries. Theresa is the inspiration behind all the recipes.”
The couple and their small team have been fortunate to leave most of their tomato picking days behind them, “so since we’ve been partnering with the professionals in south Jersey, now, our specialty is what happens in this kitchen.”