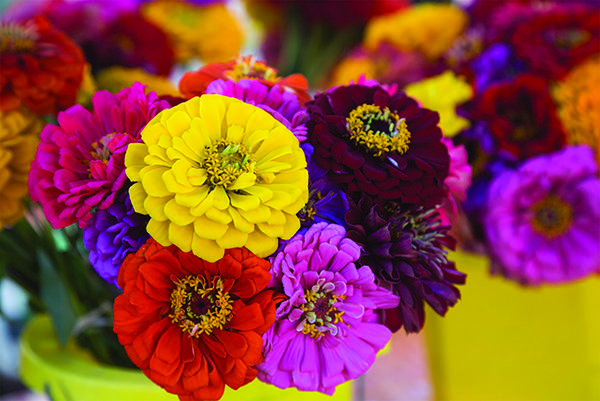 Zinnias are among the flowers grown on farms in the State of Delaware and Maryland. (Photo courtesy Stacey Hofmann, Delaware Department of Agriculture)

Flower farming is a substantial industry in Maryland, but modest within the Eastern Shore and Delaware.
The horticultural census showed there were 110 operations producing annual bedding and garden plants in the State of Maryland. Overall sales were $66,583,000 in 2019. The vast majority of these sales were to the wholesale industry: $63,133,000.
According to the 2019 Horticultural Census issued by the USDA National Agricultural Statistics Service, there were 14 operations producing annual bedding and garden plants in the State of Delaware.
The overall value of sales was $1.22 million in 2019; of that amount, $266,000 were in wholesale sales within the State.
“Flower production is a niche market, and Delaware only has a handful of farms growing flowers,” said Stacey Hofmann, chief of community relations at the Delaware Department of Agriculture. “Many of the farms that grow cut flowers sell them at farmers’ markets, roadside stands, and a few do sell flowers in the D.C. area.”
Cut flowers are a smaller element in this market in both Delaware and Maryland. According to the USDA NASS, there were four operations producing cut flowers in Delaware in 2019; each was focused on retail sales. Total sales were $20,000 that year. In Maryland, there were 53 operations producing cut flowers in 2019, with 38 involved in retail sales. Total overall sales in that year were $1.6 million.
Year 2019 is the most recent year for these statistics detailing flower farming in Delaware and Maryland. Statistics for dried bulbs, corms, rhizomes, and tubers for Delaware and Maryland are not readily available because there were so few such operations in 2019.
The Maryland Horticulture Industry 2018 Statistical Profile and Economic Summary, issued by the Maryland Nursery and Landscape Association, includes data on a wider range of horticulture products beyond, for example, just annual bedding plants and cut flowers.
This report indicated that “the majority of plants that were produced in Maryland were sold within the state.”
The Delmarva counties of Maryland accounted for less than 10 percent of all estimated sales in 2018 as well as in 2012, according to this report.
Some of the smaller farmers on Delmarva have expanded into retail operations.
“In 2019, I expanded my flower farm and went into business with a local floral designer – opening a floral shop in Easton, Md. called ‘Chesapeake Blooms,’” said Dede Hoopes of Hoopsydaisy Farm and Chesapeake Blooms. “Our business has grown to the point that I grow solely for the florist shop and I actually support and purchase from other flower farms in the area so that we can use as much local material as possible.”
Flowers grown on Delmarva range from ones produced by bulbs and tubers, like tulips, lilies, and daffodils as well as flowers that germinate from seeds, like snapdragons, zinnias, and asters.
Both states view flowers as an integral part of the overall agricultural market. Leaders hope that this type of crop can be part of everyday life for Americans. “The flowers are absolutely beautiful, with such amazing colors,” said Hofmann. “When you shop at the farmers’ market, you can’t help but buy a bouquet to brighten your day.”