Flying Farmers care for the land, look to the skies 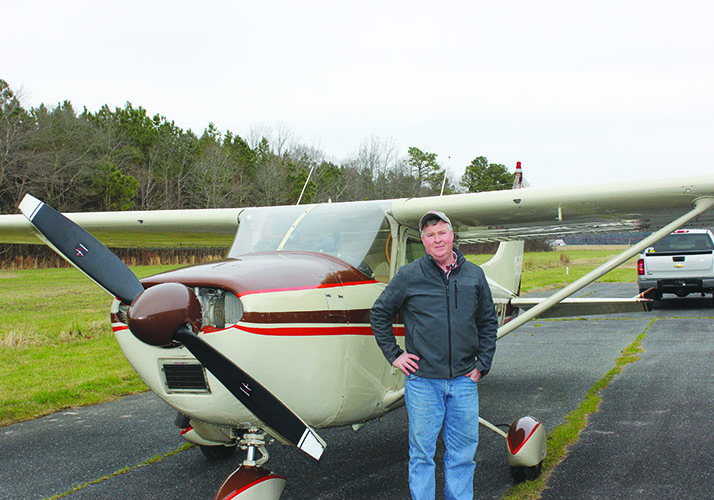 Sussex County, Del. farmer, Joel Wharton stands with his Cessna 182 airplane. Farming about 800 acres with his brother Scott, Joel’s also an avid aviator and member of the International Associaition of Flying Farmers. (Photo by Sean Clougherty)

MILLSBORO, Del. — Whether it’s on his fields or in his chicken houses, Joel Wharton makes his living off the land.
But when time and weather permits, he takes to the skies in his Cessna 182.
“It’s definitely a stress reliever,” Wharton said of flying. “Even if you can get away for a few hours.
“My grandfather used to call it ‘taking some weight off the earth.’”
As a buyer for his family’s company H&H Poultry, Wharton’s grandfather, Horace Pepper, used his plane decades ago to visit farms on Delmarva to survey growers’ flocks.
But Wharton mainly uses his single engine four-seat light airplane, which was initially owned by Pepper, for recreation, taking up friends and first-time flyers and connecting with other farmer aviators in the region and around North America through the International Association of Flying Farmers.
Flying Farmers got its start nearly 80 years ago in Oklahoma after an Extension specialist and newspaper editor toured the state interviewing farmer pilots and saw an opportunity to bring them together. A state organization in Oklahoma launched in 1944 and a year later, the national group lifted off, eventually going international to include Canada and Mexico.
Locally, Pepper was integral in founding the Delmarva Flying Farmers chapter in 1959.
At the time the groups were taking shape, in many parts of the United States, small aircraft played a large roll on farms; checking on livestock or irrigation systems in distant fields, delivering feed and fetching parts in fast fashion during harvest time.
“For some people, an airplane was as important as a tractor,” Wharton said.
Harry Bartel, IAFF president from Hugoton, Kan., said airplanes’ use for the farm, outside of aerial application, has fallen off as agriculture has changed.
With equipment so technologically advanced, farmers are doing less of their own repairs and large dealer networks move parts more efficiently than decades ago.
Still, Bartel said there are some exceptions, recalling a farmer friend in South Dakota who flies to his mailbox miles from home and then checks windmills on his property while he’s in the air.
Regardless of what the planes are used for, members said the main component of Flying Farmers is fellowship.
Pepper for years hosted an annual pancake breakfast for members at Laurel Airport.
Local chapters hold regular get-togethers with farm tours and other area attractions.
They award scholarships and name queen each year.
“This is a very very family-oriented group,” said Wharton’s wife Tina, who was named IAFF Queen in 2013. “Before COVID hit, we were trying to do things once a month,” Tina said. “We’re still hoping to go to some more things once this clears up.”
Laurel farmers Dave and Janice Tranberg learned about the aviation group in the early 1980s on a visit to Tangier Island where they met member Richard West who invited them to a fly-in event at Lawrence and Murial Ewing’s Shady Side Farm in Easton, Md.
“It was a good time for all of us, it really was,” Dave said, adding that before they left the fly-in, Murial, a longtime Flying Farmers advocate who died in May, convinced them to become members.
“She was really a mom-mom for everybody,” Dave said of Murial. “She was great.”
Dave now serves as the Delmarva Chapter president and Janice as its treasurer.
At the international level, the group’s annual convention in the summer brings flying farmers together from across the continent.
“We’ve seen a lot and done a lot of things we wouldn’t have otherwise,” Tina said with Joel adding, “And met a lot of people. There’s something in common there before you even get together.”
The 2020 convention was canceled due to COVID-19, but plans are underway to resume in 2021 with a convention in July in South Dakota.
Members also bring their curiosity for farming they aren’t that familiar with, the Whartons said.
As poultry farmers, Tina said local farmers are pretty familiar with how their farm operates but it fascinates members from other parts of the country.
“To them, their mouth is hanging open. They’re on every word,” she said. “I think we talk about farming just as much if not more than flying.”
Like farming in general, members said Flying Farmers has struggled to get younger people involved.
“When Janice and I joined we were sort of the middle-younger” group, Dave Tranberg said. “The problem is we’re still the middle-younger, 40 years later.”
Bartel said up to the late 80s, IAFF had over 1,000 families in its membership but that’s fallen to about 275 families.
The member decline led to many eastern state chapters joining to hold events together.
Tranberg said the Mid-Atlantic Region now holds about 36 members from Vermont to Maryland.
“The younger people are necessary,” Bartel said. “It’s an issue that we have to deal with because we have trouble getting the younger people involved.”
Members said there are a lot of challenges in getting more younger members.
Bartel said young adults are working more and multiple jobs and there’s a myriad of activities competing with aviation.
Joel Wharton challenged the notion that it’s too expensive, however, noting in general, costs compare well to owning a boat camper or other similar recreational activities.
“It depends how much you like it,” he said. “When you’re able to get away, you definitely enjoy it.”