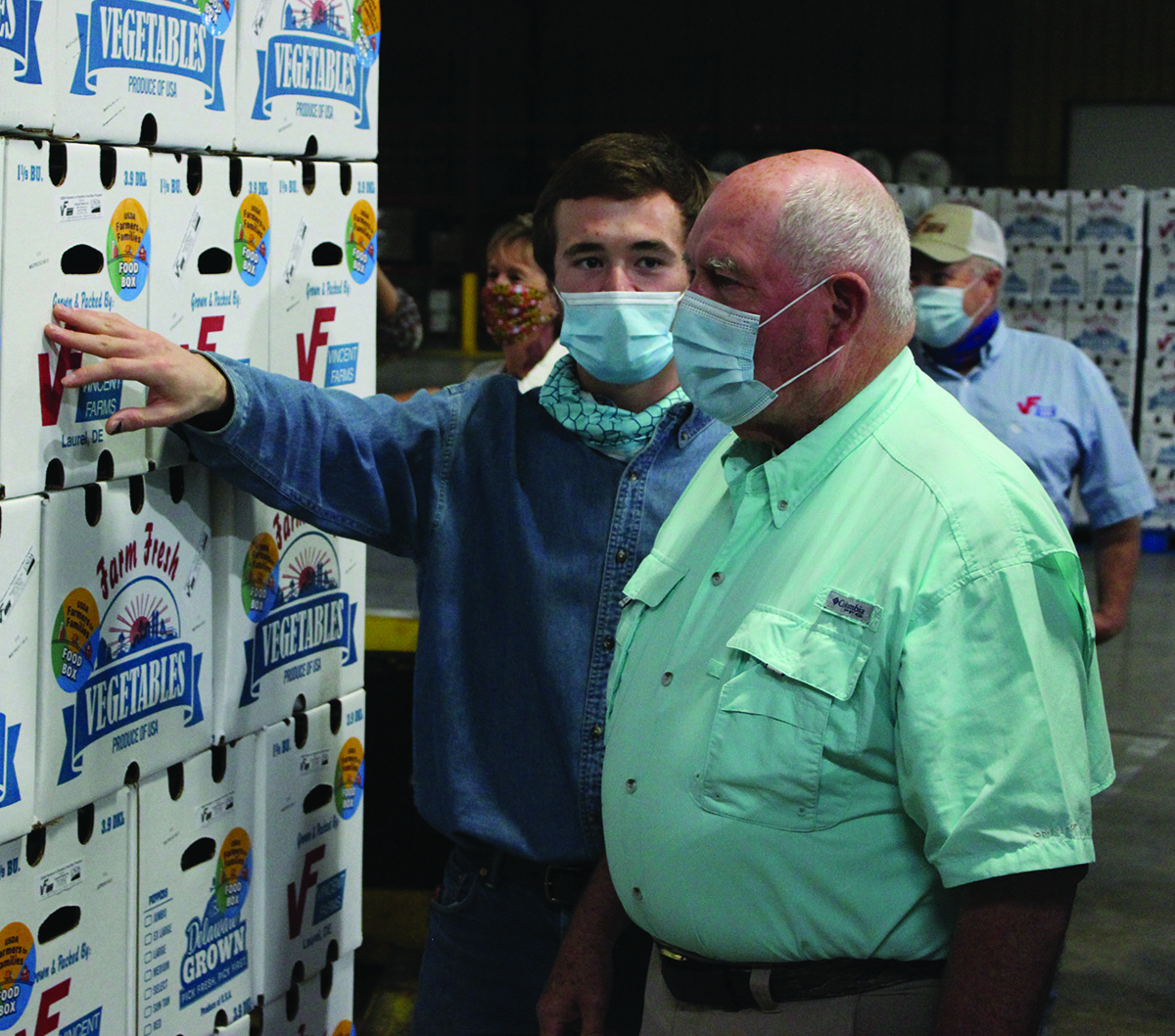 PRESTON, Md. — At every round planting sweet corn this spring, Laurel, Del., farmer Ray Vincent asked himself whether he was doing the right thing.
News at the time was dominated by reports of farmers dumping food because buyers had little to no market.
“We were wondering, ‘What should we do?’” Vincent said.
Four months later, standing with his sons Nathaniel and Josh and brother, Clay, in a Caroline County, Md., warehouse, he watched as produce his and other Delaware farms grew were packed into boxes destined for food banks as part of the federal Farmers to Families Food Box program.
“It’s just an incredible opportunity for us, really,” Vincent said. “I’m glad we didn’t cut back.”
In late June, Vincent Farms, a 3,000-acre vegetable crop and grain operation in Sussex County, was announced as one of 16 new vendors in the program and contracted to pack and ship 300,000, 20-pound boxes through August to food banks in New York, Connecticut and Massachusetts.
The Farmers to Families Food Box program was announced in April as part of USDA’s Coronavirus Food Assistance Program.
It is scheduled to purchase and distribute up to $3 billion of agricultural products to those in need.
Visiting the Vincents’ operation on July 31, USDA Secretary Sonny Perdue called it “very impressive” and said it’s doing just what the program intended.
“This is what America does best in my opinion, meeting the need of people,” Perdue said.
Joining the group of state and federal officials and media, Rep. Andy Harris, R-Md., praised the program for helping recipients get fresh food packages, generating economic activity in the community and helping farmers move their products.
“Everybody wins by this program,” Harris said. “I hope we can keep this program going right up until we’re out of this crisis.”
Boxes leaving Vincent Farms’ leased warehouse on July 31 had a melon, sweet corn, potatoes, peppers and squash. Nathaniel Vincent, who, with brother Josh, is coordinating the box packing operation, said USDA granted them some helpful flexibility to make crop changes as the season progresses.
The operation sends out about 30 trailer loads a week, Nathaniel said, each with 1,500 boxes of Delaware-grown produce. The boxes also have traceability for food safety control.
With food service and secondhand processors cutting back on what they would normally buy, he said the food box program has helped in filling that gap.
“It’s been great,” Nathaniel said. “Having the opportunity to pack these boxes and having another home for our produce is huge.”
USDA will launch a third round of program purchases with distributions from Sept. 1 to Oct. 31 spending the balance of $3 billion authorized for the program.
In this third round of purchases, USDA plans to purchase combination boxes to ensure all recipient organizations have access to fresh produce, dairy products, fluid milk, and meat products.
Nathaniel Vincent said they are planning to apply for another contract in the third round.
Josh Vincent said the box-packing operation is “almost completely different than our normal operation,” but the brothers agreed there may be aspects of it that carry over after the program is concluded. Food banks may continue a similar model, with new funding sources, Nathaniel said, and having built a contact network of the organizations that are now receiving food boxes, it could continue is some fashion for the farm going forward.
The general popularity around meal kits and home delivery also could put the experience to future use for the larger farmer operation, he added.