For Dill, worrying about the rain has become a thing of the past 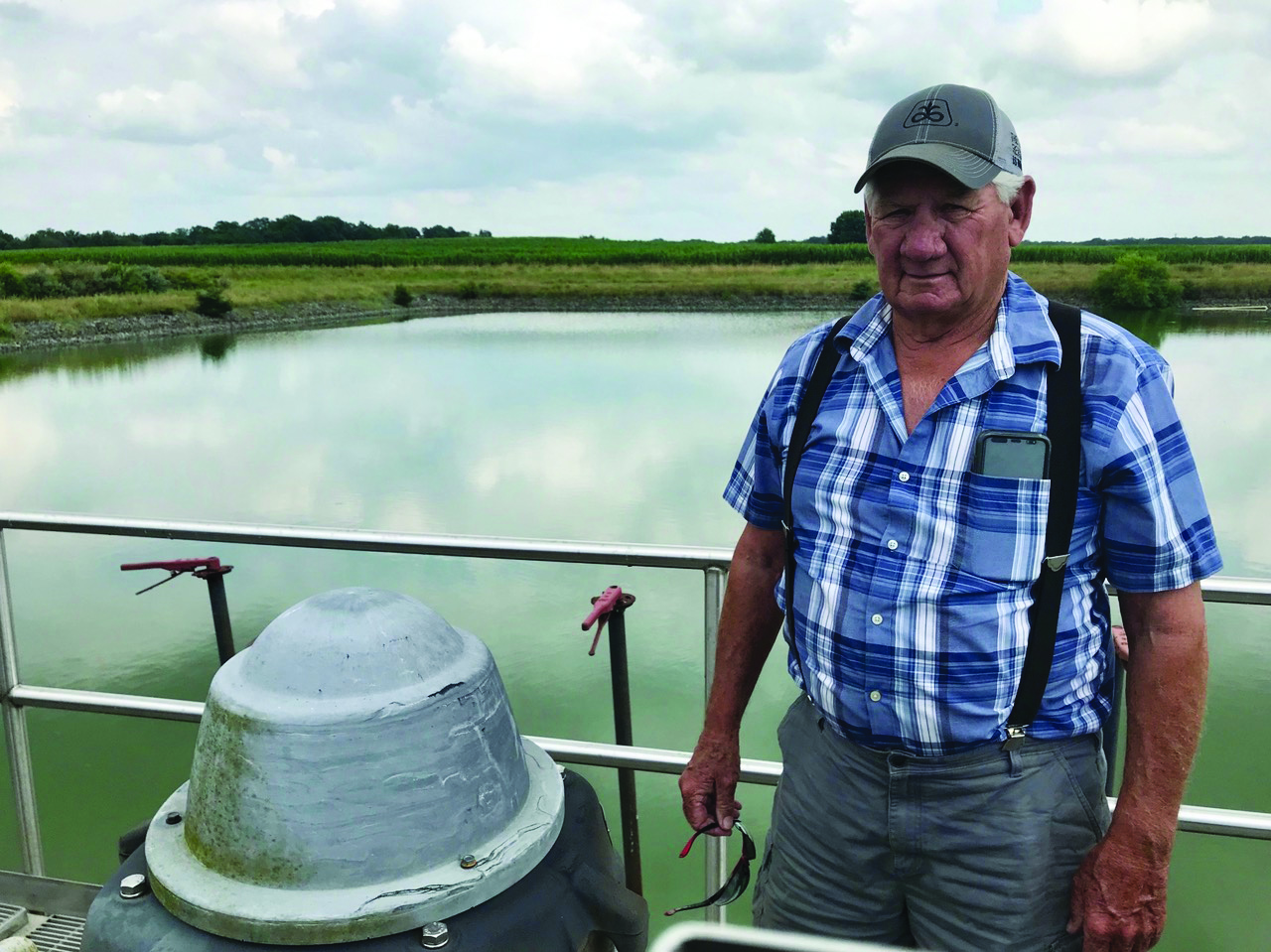 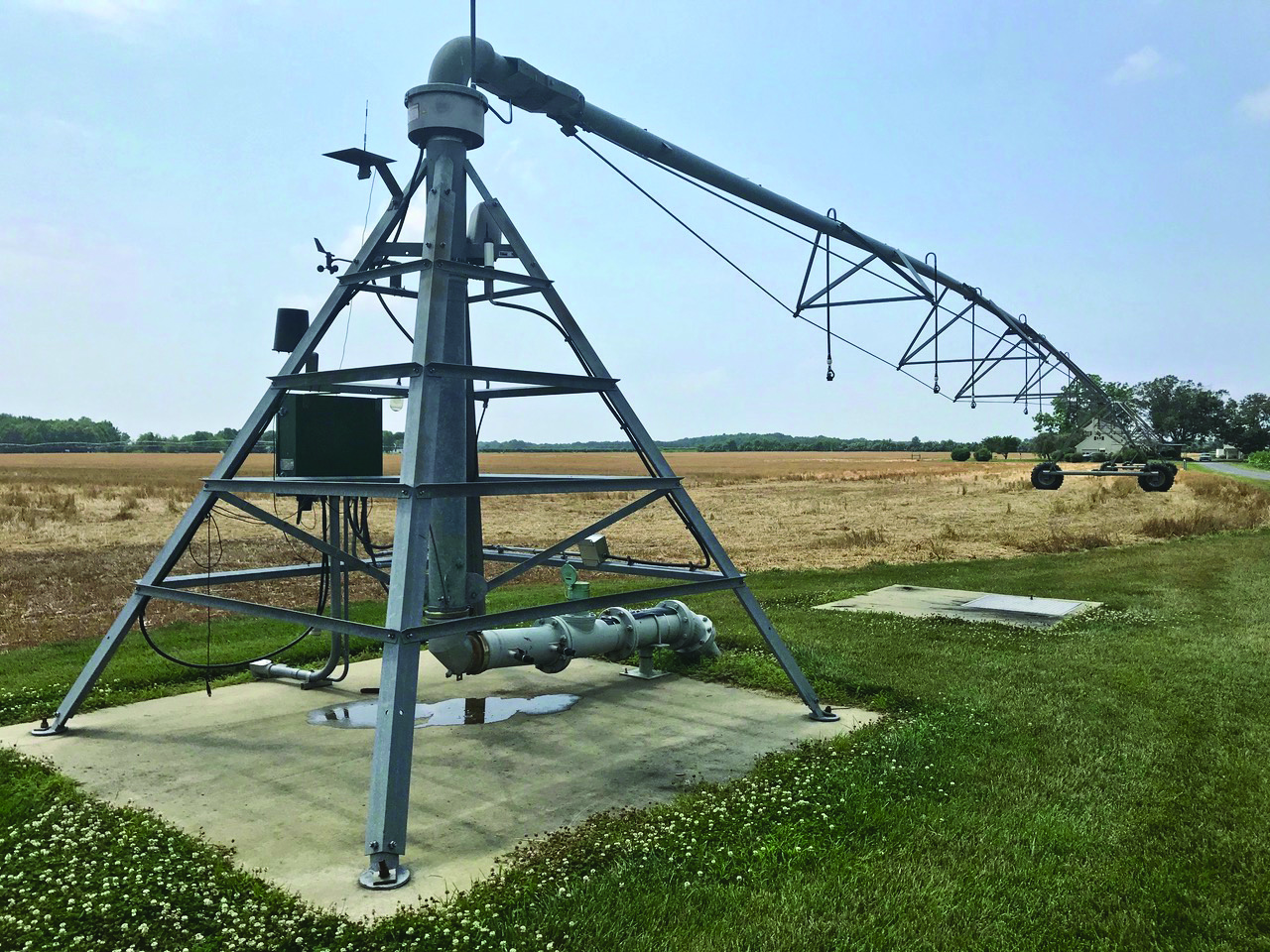 Franklin Dill, owner of Piccadilly Farm in Worton, Md., stands in front of a 2 million-gallon lagoon on his grain farm that receives treated wastewater from a Kent County facility about 2 miles away. He irrigates his fields with the wastewater. It’s part of a unique partnership between Dill and the county. Shown is one of his center-pivot irrigators that pump-treat wastewater from a local water facility onto more than 70 acres of crops on the Worton, Md., farm. (Photos by Jonathan Cribbs)

WORTON, Md. — Franklin Dill remembers visiting his doctor for a routine checkup during a period of heavy drought in the early-to-mid-1980s.

“This can’t be right,” she said, startled by a sky-high reading.

She took it again. No change. She called in the nurse and asked her to take it as well. Still no change.

Out of concern, the doctor asked him to return the following morning to have it taken once more.

An inch of rain fell on Dill’s corn at Piccadilly Farm that night.

The next morning, his pressure was taken for a fourth and final time. It was perfect.

“It was all stress,” he said. “A lot of (farmers) fall right over. But you don’t realize it because I didn’t feel bad.”

It was never more clear to him the quiet strain Mother Nature can place on a farmer — particularly those like him with no aquifer or accessible source of water for irrigation. When it rained, Dill’s crop yields were great. When it didn’t — as was the case through much of the ‘80s — they were not.

But for Dill, worrying about the rain is a thing of the past. For nearly a decade, Dill, through a unique partnership with a local wastewater treatment plant, has been irrigating 74 acres of his 187-acre grain farm with treated wastewater piped onto his property from a facility about two miles away.

The project began about 12 years ago when Kent County wastewater managers approached Dill about pumping treated wastewater to his farm. They had realized that treated wastewater could benefit local farmers and their own needs by putting it to use after their facility separated solids and nutrients from the water.

Dill was selected for several reasons. He was open to the idea despite initial reservations that evaporated after he visited several similar facilities across the region. (Many farmers were hesitant about applying wastewater, however clean, to their crops.) After two years of surveying, county officials also determined his farm had soils that could filter at least two inches of water each week.

“Once you go up that hill, that’s Butlertown soil,” he said. “It’s much better growing soil, but it won’t take that much water. It holds more water, and they won’t let you put water on it.”

When Dill finally agreed to the project, what he got was stunning. Using federal and state funding, the county upgraded and expanded the Worton-Butlertown wastewater plant at a cost of about $11.5 million. They built an underground piping system to Piccadilly Farm and the on-farm irrigation system that would apply it to his crops, including a 2 million-gallon lagoon that receives that wastewater, a pumping station and five center-pivot irrigators.

Dill also demanded complete control of the system in exchange for his partnership. The entire irrigation system can be controlled by a cell phone app. The wastewater plant produces just 50,000 gallons of treated wastewater each day and stores 18 million gallons in tanks, Dill said.

Those tanks fill after Dill completes his harvest in the fall, and any excess water, once it’s treated, can be discharged into a nearby creek.

“The regulation on this stuff’s unbelievable,” he said. “I couldn’t believe it.”

The plant uses a membrane filtration system and ultraviolet light to clean the incoming wastewater, which is piped in from local homes and businesses. The system works, Dill said. Last year, he used up to 15 million gallons of water. Only about 400 total pounds of nitrogen were measured inside it.

None of it would matter much to Dill, however, if the system didn’t produce results on his field. Growing on dry land had its drawbacks.

“I’ve seen 30 bushels an acre, which is nothing,” he said. “We had six droughts in the ‘80s. More than that. Six bad ones. Three of them were back-to-back. It was unreal.”

Now, in a year with average precipitation, the irrigation system boosts corn yields by about 30 bushels per acre. He’s witnessed yields in parts of his farm rise from 115 bushels per acre to 205. Double-crop soybeans in a dry year are boosted up to 12 bushels an acre. Dill is also reassured that the water he uses is clean and compliant with the Food Safety Modernization Act, which regulates water quality testing for farmers.

Systems such as Dill’s may also become more common in the future, University of Maryland researchers said. The state government is encouraging water reuse, and it’s popular in other parts of the country and the world. Only a miniscule percentage of the planet’s water — between 0.01 and 0.30 percent — is available for human use, and demand for it continues to rise.

For now, however, his arteries are thanking him.

“In a worst-case scenario, this is probably 75 percent better than dry land farming,” he said.