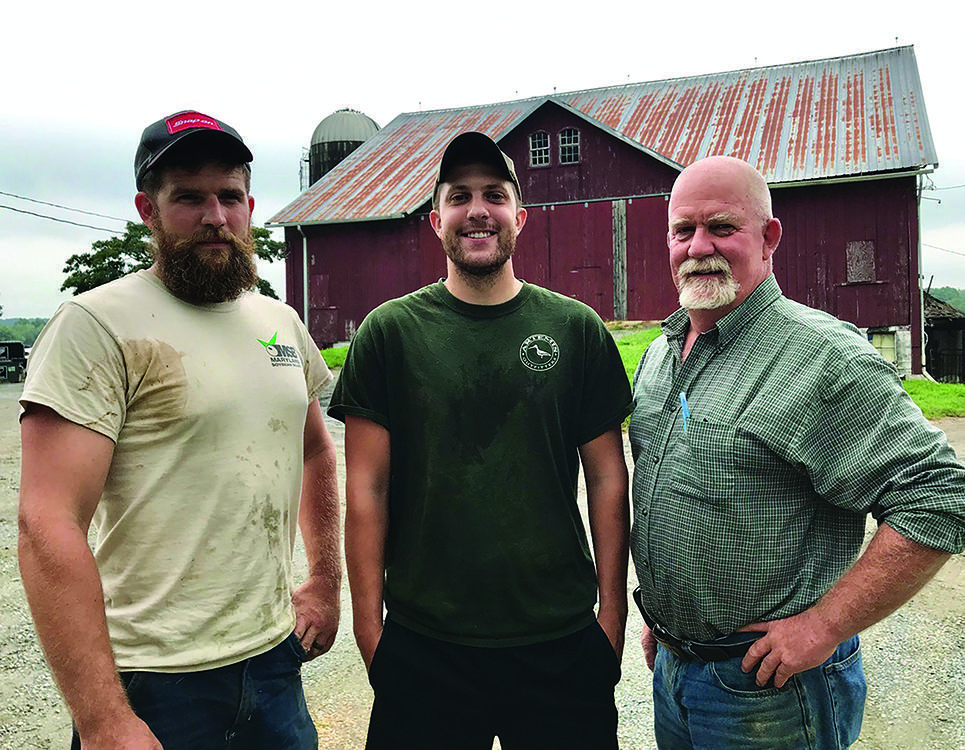 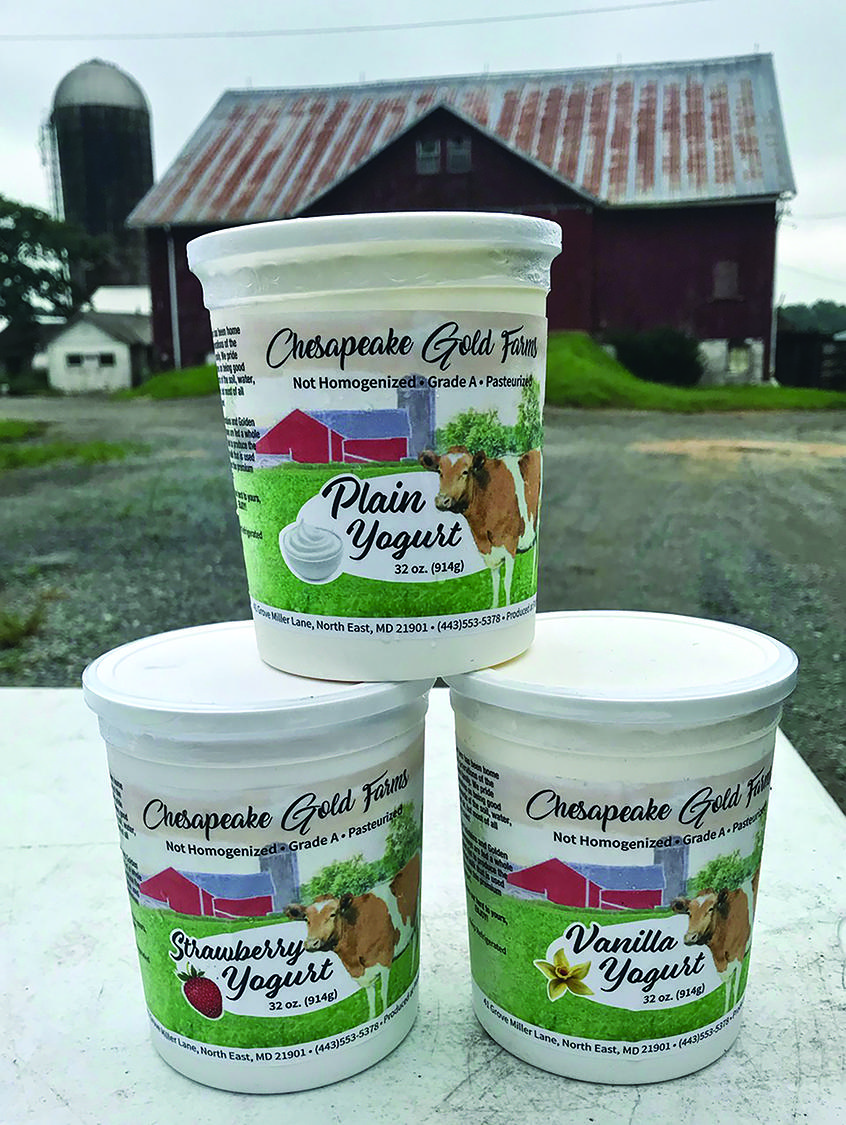 At top, Wes (left), Ben and Bob Miller, who run Chesapeake Gold Farms in Cecil County, Md., recently launched their own yogurt, which they’re selling at retailers across the Delmarva region. They see the yogurt as another outlet for their farm’s milk and another lifeline for the farm as a whole. (Photos by Jonathan Cribbs)

NORTH EAST, Md. — For the last three years, Chesapeake Gold Farms has been branching out, launching new dairy products made with fluid milk from its herd of roughly 180 Holstein and Guernsey cows. The products, such as sweet cream butter and small, plastic-wrapped blocks of cheddar cheese, must be marketed and sold as well — practically a second job for the already overburdened family operation.

“Basically, you’ve got to stretch your day out,” said Bob Miller, whose family has owned the Cecil County farm since the 1700s. “We just work as much as we can right now.”

But the products, which increase the value of the farm’s fluid milk, have helped the Miller family keep its dairy operation alive despite a stingy commodity market that put many fellow dairymen out of business over the last several years. Last month, Chesapeake Gold Farms added yet another product to its dairy offerings: yogurt in three flavors, produced in Pennsylvania and sold by a network of retailers the Miller family slowly recruited with phone calls, visits and emails, starting in 2018.

“When we first started, we were begging people to take our product on,” Bob Miller said. “You got to work at it. It’s not like taking a load of corn [to a grain buyer] and you know you don’t really have to work at it. All you do is drive a truck up there and they’re going to take it.”

The Millers first turned their eye toward yogurt after they felt encouraged by local consumers who happily scooped up their cheese, milk, butter and beef. One by one, Chesapeake Gold convinced more than 40 retailers across the Delmarva region — wineries, farm markets, butcher shops and small, independent grocery stores — to carry their food. The value-added products managed to produce a reliable profit, unlike its commodity milk, said Wes Miller, Bob Miller’s son and partner.

The success led them to yogurt about a year ago. After considering several yogurt makers, they settled on a producer in Pennsylvania, where yogurt production by dairy farms is more common. The production process begins with Chesapeake Gold’s high-quality milk, the Millers said. That’s achieved by focusing on cow comfort, hygiene, well-maintained equipment and the preliminary incubation count, a popular measure of milk quality that can detect bacteria in cold environments.

“The parameters that we set [for those counts] are way lower than the industry standards,” Bob Miller said. “We just try to do the normal dairy stuff you’re supposed to do to have good-quality milk.”

Guernsey milk’s higher protein and butterfat also contributes to a a slightly richer taste, and the cows are fed a consistent diet to ensure that taste’s consistency. They hire milk haulers to move the milk to their yogurt plant and pick up the finished product — plain, strawberry and vanilla yogurt — within three days. It’s refrigerated on the farm in quarts. One complication: Due to its perishability, they have only six weeks to sell it all. Last week, they had only been through one production cycle since they debuted the yogurt in early August. They didn’t sell out and had to donate some of it, but the response from customers was positive, Bob Miller said.

Benjamin’s Store, a small retailer in Rising Sun, Md., accepted a dozen quarts of each flavor and quickly sold out, said Patsy Lovelace, the store’s owner.

“It went in two days, and I haven’t had it since,” she said.

The store’s customers, already hooked on Chesapeake Gold cheeses, were willing to try yogurt because it came from the same farm, she said. Many of her customers are eager to support local food producers.

Nationally, per-capita yogurt consumption peaked in 2014 at about 15 pounds per person, according to USDA data. That number has since declined to 13.4 pounds in 2019 — possibly due to changing tastes around the American breakfast table — but consumers continue to eat a lot of yogurt, and those numbers don’t capture consumer interest in local products. Dairy farmers, desperate to access additional outlets for fluid milk, are responding to that perceived or actual demand, said Matt Herrick, spokesman for the International Dairy Foods Association in Washington.

“What we’re seeing generally from farmers… is they’re diversifying,” he said. “There’s an evolution happening in the dairy industry, and I think dairy farmers recognize that and are trying to take advantage to the best of their abilities.”

Whether yogurt will prove to be a long-term source of profit for Chesapeake Gold remains unclear. If it does work out, the Millers would like to move production to their farm — an expansion that would require hundreds of thousands of dollars, an immense amount of work and a gauntlet of new government permits. They could produce private-label yogurt for other regional farmers, and they could open commercial kitchen space to address a local shortage for food producers.

For now, they’re making sure a viable market for their yogurt exists.

“In the few weeks we’ve had the yogurt, we’re learning that the yogurt demographic is a different customer than the cheese [or beef] customer,” Wes Miller said.

The Millers are still trying to determine who exactly that yogurt customer is, but all of their products are generally sold to people who ardently support local food and are willing to pay a premium for it, Bob Miller said. But they need to know it exists to buy it — a marketing challenge the Miller family faces every day, often after 12 to 15 hours of more typical farm work.

But if you put the time in, yogurt — and other dairy products — may help keep your farm above water, he said.