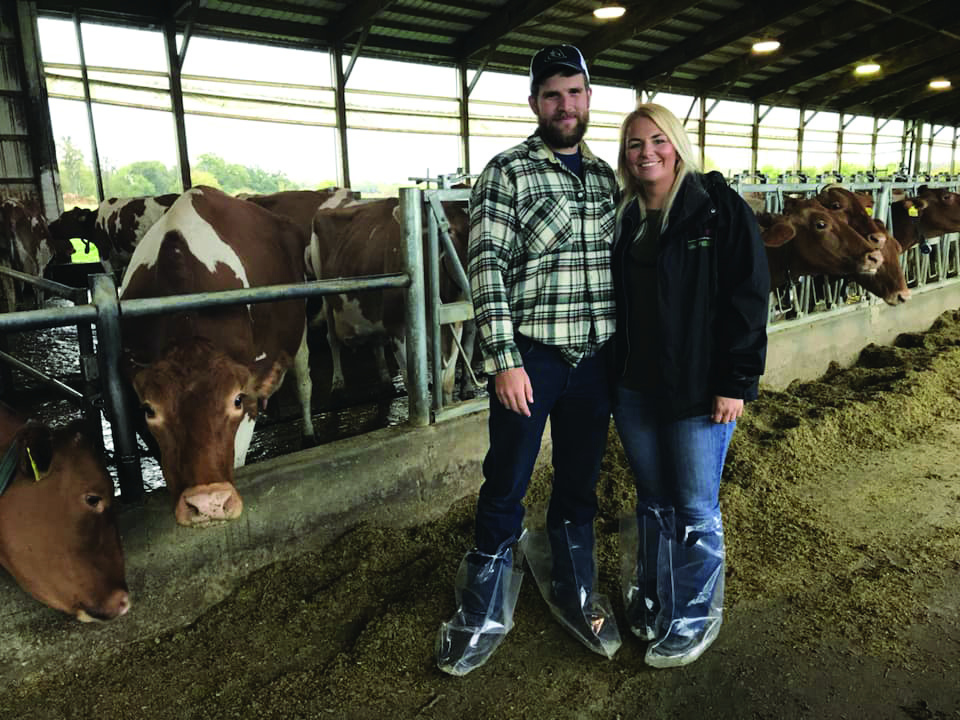 Wes Miller, left, and Amanda Heilman, both farmers in Cecil County, Md., are getting married Oct. 10. Because their relationship orbits around agriculture, the couple is raising much of the food and the flowers for the ceremony and reception. (Photo courtesy Amanda Heilman)

NORTH EAST, Md. — From setting a guest list to choosing a venue, a disc jockey and centerpieces, planning a wedding can push any bride to the breaking point.

Amanda Heilman also wants to raise the beef, raise the produce and grow the flowers.

The 32-year-old Cecil County farmer and University of Delaware cheese maker is marrying her long-time boyfriend, 30-year-old Wes Miller, in the fall, novel coronavirus permitting. Because they were brought together by agriculture, Heilman decided it would be fun to produce the food her guests eat.

“I just feel like agriculture is the center of our relationship,” she said. “So we thought doing a farm-to-table dinner would be really neat to provide to the people we care about.”

The Oct. 10 wedding will be held at Mount Ararat Farm in Port Deposit — one of the Miller family’s properties — overlooking the Susquehanna River. Up to 300 guests are expected, and Heilman has already set the menu. It starts with a mixed-green, seasonal salad with homemade cheese.

“I pride myself on salad greens,” Heilman said.

A farming friend from Kent County is providing Jersey butter, which will be shaped with cow molds for bread, she said. She’s raising a steer for the main course — sliced beef with a creamy horseradish sauce — and two pigs for sausage in the pasta bella.

Instead of mashed potatoes, Heilman is raising turnips — they’re in-season — for a mash with garlic and Asiago cheese. She’s also making summer sausage for a massive cheese board.

The wedding cake will come from Bing’s Bakery in Newark, Del., and they’re making a cobbler with apples from a nearby orchard. Fortunately, Heilman doesn’t have to cook and serve the food. She’s working with a generous caterer, she said, which took some time to find as several caterers declined to work the wedding because they couldn’t charge for food.

“They literally said, ‘We’re not going to make any money off of you,’” Heilman said. “It was just by dumb luck that I found her.”

She’s also growing her own flowers: dahlias, cosmos, celosia, zinnias and amaranth, a tall, red, ornamental plant that — it must be said — isn’t palmer amaranth, the noxious pigweed bedeviling some regional crop fields. Susanne Zilberfarb, executive director of the Maryland Agricultural Education Foundation and her maid of honor, is assisting with the flowers, and her fiancé is planting a sunflower field for pictures.

There will also be cows.

“Our biggest hobby together is showing cows, so we’re planning to have as many cows as we can in pictures and stuff,” Heilman said.

Heilman and Miller were engaged Jan. 1 during a New Year’s trip to Niagara Falls. Miller proposed during a visit to the Skylon Tower, which overlooks the falls. Afterward, they spent a week together on the southern Ontario farm of one of Heilman’s friends.

They were acquainted in college, she said. Heilman graduated from the University of Maryland in 2011. Miller graduated from Penn State. Coincidentally, she was hired as an agronomist in Cecil County and ended up working with Chesapeake Gold Farms, owned by the Miller family, and she reconnected with Miller.

“We just stayed friends for a while,” Heilman said.

Shortly thereafter, they began volunteering with the Farm Bureau’s Cecil County Young Farmers subcommittee. They agreed to run a busy milkshake stand at the Cecil County Fair in 2012.

“The line (for the stand) wraps around the building, and it can get pretty intense,” she said.

It went so well they began dating. Eight years later, they’re getting married. Because so much has been put into it, the wedding will probably proceed regardless of what the coronavirus is doing, she said.

“Everyone’s really excited for it, and then everyone looks at me and goes, ‘You’ve got a lot of work to do,’” Heilman said. “But everyone’s been really big on trying to help us out.”