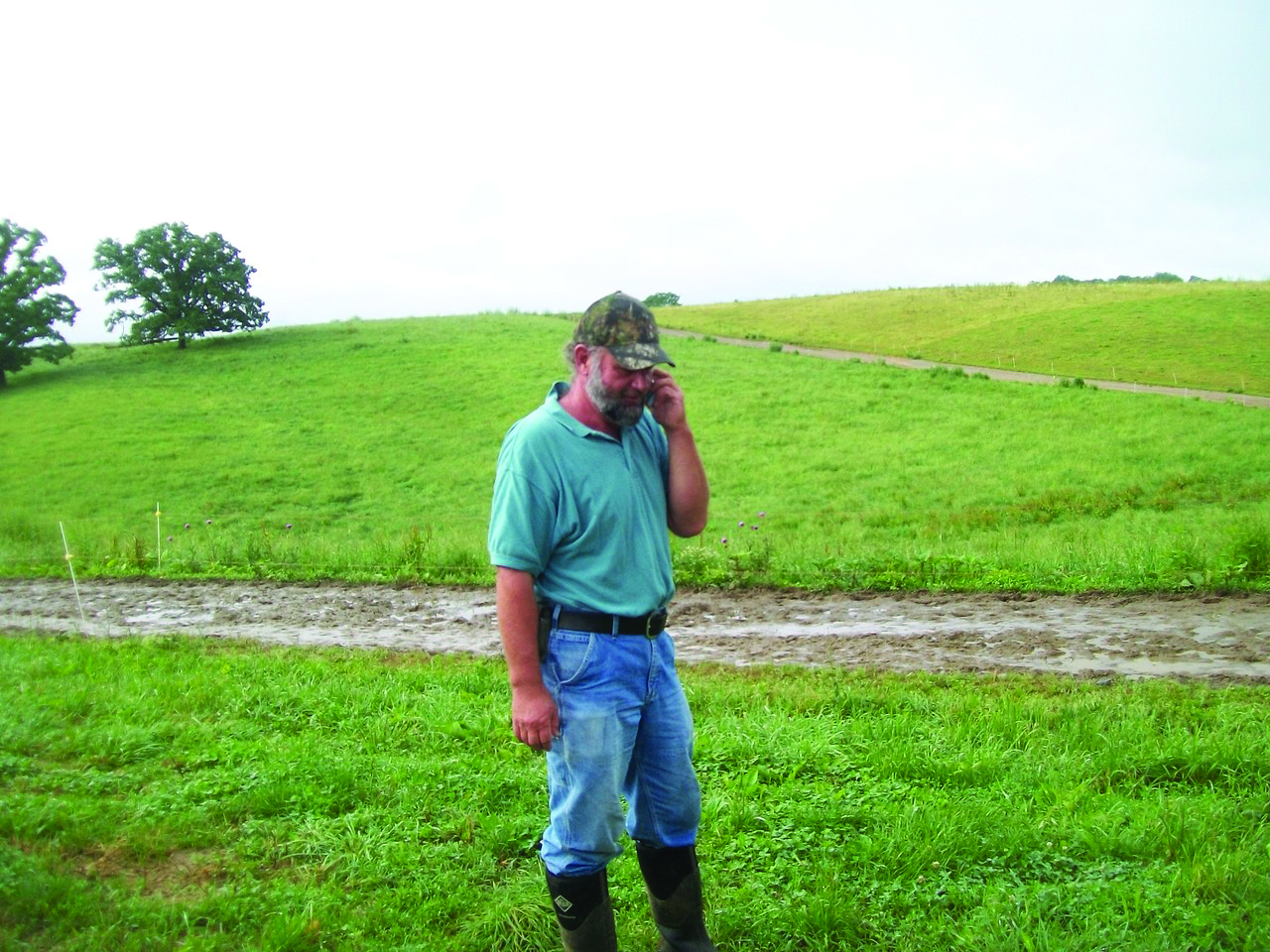 George Hudson, a Pulaski County, Va., dairyman works the phone late last week to gain support for efforts to have his family’s seasonal dairy included in federal coronavirus funding. Lush pastures behind him will soon be grazed by his cows. Hudson farms with his wife Julie and their two adult children, Kadie and Isaac. (Photo by Jane W. Graham)

DUBLIN, Va. — A farming family here has learned that their seasonal grazing dairy does not qualify for help from the Coronavirus Food Assistance Program and is working to be included in the program.
George and Julie Hudson and their two children started Greenway Dairy Farm in 2002.
Seasonal pasture-based dairies do not fit the protocols set forth in the CFAP rules the Hudsons found when they sought to be included in the program.
Production on these types of dairies is different than on conventional dairies, Hudson said in a telephone interview. He told of his efforts on behalf of his farm as well as others in the same situation to be included in the program. These included contacting the Farm Service Agency and Virginia Farm Bureau Federations as well as CFAP.
“We are a spring calving seasonal grazing dairy located in Pulaski County, Virginia,” Hudson explained in a letter to CFAP administrators.
“Typically, on a spring calving seasonal dairy in the United States the least amount of milk is produced during the first quarter whereas a much greater amount of milk is produced during the second quarter” he explained.
“This has consistently been the case on our farm for the past 18 years. The CFAP dairy program intends to provide financial assistance to dairies that have sustained losses during the first and second quarters of 2020 due to the effects of the Coronavirus.”
Hudson pointed out in his letter that the program is clear in saying that payment consists of two parts.
“A larger portion of this payment is for the first quarter, $4.71 per 100, and a smaller portion, $1.47 per 100, is for the second quarter,” he wrote. “While the Coronavirus Aid Relief and Economic Security Act (CARES) funds the first quarter payment, the second quarter payment is pulled from Commodity Credit Corporation (CCC) funds.”
In the letter, Hudson reviewed how allocation of the funds is outlined in CFAP rules.
“The CFAP program only allows the use of first quarter production numbers to sign up for both first quarter and second quarter payments,” he stated. “Thus, the program does not provide a way for the producer to use their actual second quarter production to receive compensation for the second quarter portion of this payment. We feel this is unfair to spring calving seasonal dairies.”
Hudson used his production figures in his letter to make his point.
“This year we produced 35,428 pounds of milk during the first quarter,” he reported. “We are projected to produce approximately 550,000 pounds of milk during the second quarter. This is a significant difference. The month of May is our highest production month of the year and due to the effects of the Coronavirus it is also the month with the lowest pay price for milk so far this year. If we do not create a way for spring calving seasonal dairies to use their actual second quarter production numbers to receive payment intended for the second quarter, these dairies may endure the greatest loss while receiving the least amount of help.”
Hudson stated his request clearly.
“We are simply asking if we can use our second quarter production numbers for the portion of the payment designated for the second quarter,” he declared.
The Hudsons have reached out to several Virginia agencies for support in their quest.
Erick Paulson, executive director of the Virginia State Dairymen’s Association, indicated in a telephone interview that his agency is supportive of the efforts of seasonal dairies to be included in the CFAP.
“It is an issue we would like to see rectified,” Paulson said.
Tony Banks with the Virginia Farm Bureau Federation also voiced support.
“VFBF is supporting the affected dairies,” Banks said.
Both Paulson and Banks were working to determine how many seasonal dairy farms are currently operating in Virginia. While there were several a few years ago, the numbers appears to have dwindled. They had only identified three or four.
All are in Southwest Virginia. Of these, two are in Pulaski County.
The Hudsons have been working closely with FSA in submitting their information in order to meet a June 22 deadline as required by the rules. There is provision in the CFAP rules that allows additions to the current commodities eligible for funds.
For this to happen applications must be submitted to USDA and be evaluated through a Notice of Funds Availability process.