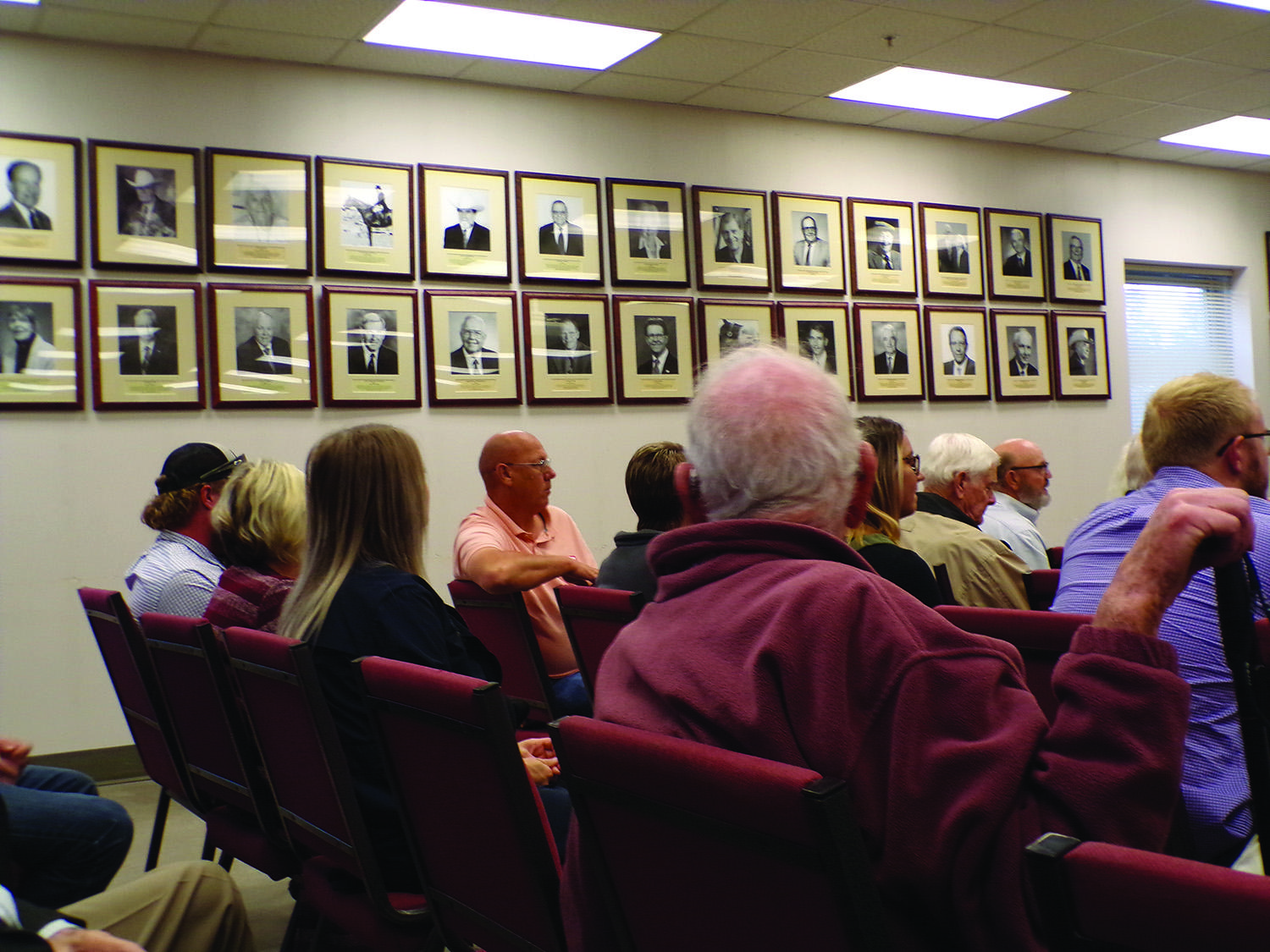 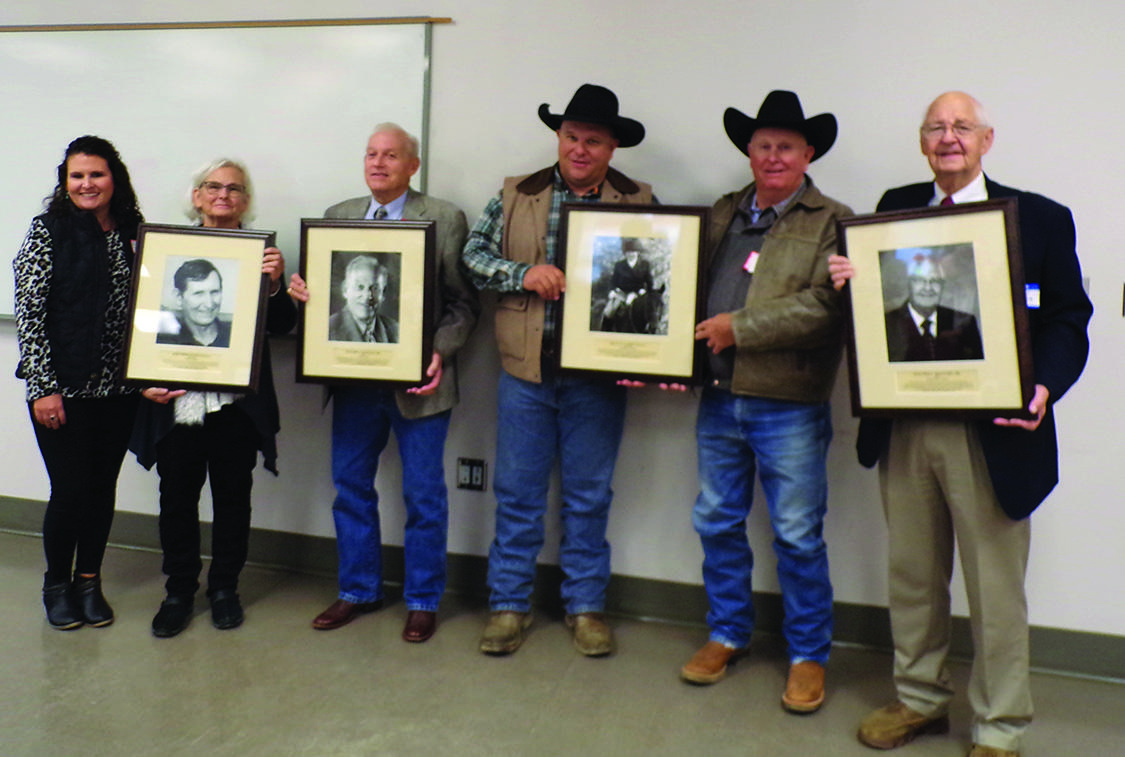 Inductees into the 2021 Virginia Livestock Hall of Fame or their family members posed for the traditional after induction photo with the portraits that will be hung in the Alphine-Stuart Arena at Virginia Tech. They are from left, John Sponaugle’s daughter, Laura Sponaugle and his wife Pamela Sponaugle; Edward Metcalf; Sally Lamb’ son, Matt Lamb, and her husband, David Lamb; and Walter McClure. (Photos by Jane W. Graham)

BLACKSBURG, Va. — Agriculture is Virginia’s largest industry and those in agriculture are really essential workers, Virginia Commissioner of Agriculture Brad Copenhaver told those gathered here Oct. 24 to induct four leaders of that industry into the 2021 Virginia Livestock Hall of Fame and to recognize the 2020 inductees who did not get a ceremony because of the pandemic.
“Part of my job is to make sure people know about agriculture,” the recently-appointed commissioner declared, noting these are two percent of the population who feed and clothe the remining 98 percent.
The inductees representing varying segments of Virginia’s agriculture industry joined 77 others in the Virginia Livestock Hall of Fame during ceremonies at Virginia Tech’s Alphine-Stuart Livestock Arena where portraits of all the hall of fame members hang.
Edward F. Metcalf, Sr., from the beef industry and Walter V. McClure, Sr., from the dairy industry were present for the presentation. Sally G. Lamb from the horse industry and John Sponaugle, both of whom died in 2020, where honored posthumously.
This event also recognized the 2020 inductees Robert E. “Bob” Foster, a beef cattle farmer, Riley and Barbara Wagner, dairy farmers, and H. Franklin Graves, a leader in marketing Virginia cattle.
Charles W. Ahrend, a leader in the pork industry and Christopher Chenery, a breeder of quality race horses including Triple Crown winner, Secretariat, were honored posthumously.
Riley Wagner died after being named to the hall of fame.
Virginia Tech Dean of the College of Agriculture and Life Sciences Alan Grant, and the head of the Department of Animal and Poultry Sciences David Gerrard joined Copenhaver in welcoming family and friends of the honorees for the presentations.
The conference room of the building was packed with a standing room only group of enthusiastic supporters.
Copenhaver, a native of Meadowview, Va., said he grew up on a farm and learned about farming from his grandfather, Ernest Copenhaver, who was one of the hall’s earlier inductees.
He thanked the CALS leaders of the last several decades in helping make the industry what it is today. He included Dr. Arthur “Ike” Eller, organizer of the occasion, in his remarks for his help to so many.
“Ed Metcalf left a lasting impact on the Virginia cattle industry,’ the Virginia Cattlemen’s Association said in nominating him as the beef industry inductee. “For 27 years, he served as the owner-operator of the Lynchburg Livestock Market. Under his management, Lynchburg became the first market to offer a state-graded weekly auction of cattle.
“His dedication, leadership, and character set a high standard for all cattlemen.”
Brandon Reeves, VCA executive director, who introduced Metcalf, credited him with helping develop the quality of Virginia cattle that people are able to trust. He quoted Butch foster, long-time VCA field representative — as saying Metcalf was the fairest livestock market operator he has worked with.
Reeves complimented him by saying not only is he fair, he also knows cattle.
Dan Myers of Walkup Holsteins introduced McClure, the Virginia State Dairymen’s Association inductee, describing him as loyal, humble Christian man.
McClure, a Franklin County native and 1960 Virginia Tech graduate, became interested in cows when he was 15 with a special interest in the Holstein breed.
“He has been involved in leadership positions in the dairy industry his entire career, serving as a Virginia Cooperative Extension agent and then in the artificial insemination industry for 25 years,” Myers said. He worked with both beef and dairy genetics.
McClure established Windswept Holsteins in 1971 and bred cattle known worldwide.
More than 40 of his bulls have been used for artificial insemination.
Lamb, the Virginia Horse Council’s honoree, and her husband David came to be known as the First Man and First Lady of the Virginia horse industry for their many contributions to the horse world.
Sally Lamb was an esteemed equestrian instructor and horse industry advocate who had a profound and lasting impact on many lives in the Virginia,” according to her nomination.
“She was the founder of the ‘Four Horseshoes Youth Foundation” an organization dedicated to providing opportunities for equine experiences and horseback riding for underprivileged youth.”
“John Sponaugle was an exceptional leader, serving two terms as a director before becoming president of the National Suffolk Sheep Association,” the VSPA said in nominating him. “He was inducted into the NSSA Hall of Fame.”
Sponaugle is remembered for his involvement in the Virginia Sheep Producers Association as well as the Virginia Performance Ram Test and the Eastern Stud Ram Sale.
He also is credited with founding the Virginia Junior Seep Breeders Association.
This sheep breeder served as a 4-H leader for 20 years and is has helped many to get started in the sheep industry.