From tobacco to high tunnels 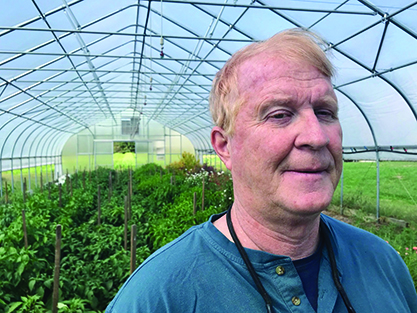 Gerald Brust, senior agent at the University of Maryland Extension’s Upper Marlboro facility, oversees the farm’s research into new crops, sprays, pests and other issues afflicting Southern Maryland growers. Once a hub for tobacco research, the 202-acre facility, part of the Extension’s Central Maryland Research and Education Center, has shifted to develop alternative crops for farmers leaving the region’s tobacco industry. Above, Brust stands inside a greenhouse on Terp Farm, a 2-acre operation within the facility that provides vegetables and other crops for the university’s dining halls. (Photos by Jonathan Cribbs)

UPPER MARLBORO, Md. — Gerald Brust strolled across a field at the University of Maryland Extension’s Upper Marlboro research facility last week and stopped at a pumpkin covered in gray crust. He bent over to get a closer look.

“Plectosporium blight,” he said. “What it does is it rots the fruit.”

In past years, the pumpkin would have been sprayed with Bravo fungicide before it was overtaken, and the fruit may have been saved. This year that wasn’t the case.

“You had to use that plus another product,” he said. “Something like Cabrio. Another fungicide. Those two together would do a good job. But if you didn’t put it out soon enough you were screwed.”

The results of that research were obviously too late for this year’s growers, but Brust expected he’d mention it during the Extension’s winter meetings — online, of course — to make sure growers knew what to do if the blight — and its newfound resilience — returned next year.

It was one just one of a handful of ongoing research inquiries the 200-acre station, part of the Extension’s Central Maryland Research and Education Center, has committed itself to since it stopped researching tobacco in 2010, Brust said. The farm was an experimental tobacco research facility overseen by Extension specialists known throughout the industry until the late 1990s when the university reoriented the facility toward the development of alternative crops for farmers exiting tobacco.

“There’s still tobacco being grown here, but it’s a tiny amount,” he said. “Just a quarter of an acre, a sixth of an acre, just for seed for a couple of lines that they want to keep going.”

Over the last two decades, Brust said he’s proud of the work the Extension has done on behalf of Southern Maryland growers. More farmers in the region are growing vegetables, including tomatoes — his specialty — and organic vegetables, particularly younger farmers.

“More markets have opened up for fresh vegetables,” he said, citing the Loveville Produce Market’s shift from tobacco sales to produce in St. Mary’s County. “And if the land was good for growing tobacco, it should be good for growing vegetables.”

Evidence of that growth can be seen in St. Mary’s County where more than 625 acres of vegetables were harvested in 2017, 337 acres more than what the county harvested in 1992, several years before the state bought out most of its tobacco farmers. Production has grown despite the encroachment of residential and commercial development, which remains to Brust the region’s largest agricultural threat.

“I’ve had you-pick growers and they are just surrounded by development now, when before it used to be open field,” he said. “It’s just a matter of time until that generation gets a little older, they’re going to call it quits, and they’re going to sell that property off.”

A considerable amount of the facility’s energy is dedicated to researching a growing number of crop pests, including weeds and diseases, which may be encouraged by climate change.

“It used to be just insects we dealt with in resistance management,” he said. “Now it’s disease and weeds. … But we’re seeing a lot more resistance to the fungicides.”

The facility tests those fungicides every year to monitor their efficacy, and findings are relayed to growers. They’re used to prevent issues such as powdery and downy mildew. Over the last 10 years, disease has occasionally created “catastrophic” crop loss in Southern Maryland, lowering yields between 40 and 60 percent, Brust said.

Looking to the future, he said the facility is spending more time on high-tunnel production. Due to their popularity with some farmers, he’s been studying biostimulants, also known as fertilizer additives, marketed by foreign companies for the vegetable industry. His thoughts so far? Results are mixed, and he can’t tell whether they work.

“I’ve had three or four (foreign biostimulant) companies come over here to visit me, looking for somebody they can work with in each region of the United States,” Brust said.

Hemp, now a legal crop in Maryland, is also being studied by two different Extension teams, he said, though he’s dubious about that crop’s future in the state. GMO crops, he said, are going to be more important in the future, even if local growers have little interest in them now.

“The GMO crops are great for the field crop growers, but for vegetable growers, once they start asking more about it, we’ll start looking into it more,” Brust said.

At the beginning of this year’s growing season, local tobacco experts expected the state’s tiny community of farmers — between 60 and 70 — to shrink significantly after a disappointing first experience last year with raising Connecticut Broadleaf, a type of tobacco adopted by many growers after Philip Morris USA abandoned its contracted acreage in the state in early 2019. Departing growers will need to transition into something else. Brust said he thinks the Upper Marlboro facility has done a good job easing that process over the last two decades.

“A grower may disagree that we didn’t help them as much as we could have or should have, but I think overall most growers are pretty pleased with the switchover and that they weren’t abandoned or just left to their own devices to get by,” he said.