Garey reflects on travels that broadened her views 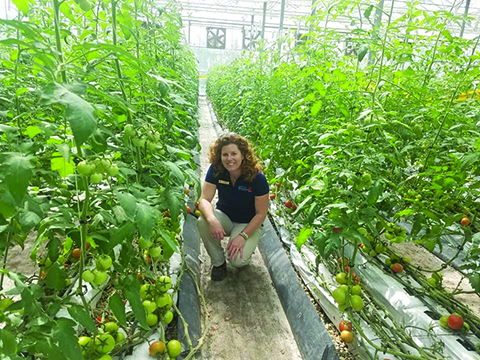 Susan Truehart Garey, an animal science agent with University of Delaware Cooperative Extension was the second Delawarean to be chosen to participate as a Nuffield International Farming Scholarships winner — perhaps only the fifth or sixth from the United States.
The whole experience was “fascinating,” Garey said.
The seven-week program kicked off in March 2019 at the Nuffield International Contemporary Scholars Conference. Scholars met in Iowa for eight days, then gathered for three days in Washington, D.C. After six days exploring agricultural ventures in Kentucky, the group flew to Dublin, Ireland, then on to Prague, capital of the Czech Republic.
“We had one day with Michael Horst,” Garey said. “Horst Equipment is used a lot in Europe.”
The group had a free day to visit historical sites in Prague, then flew to Romania, “all the way up into the far northern corner,” Garey continued. “We spent two days at a large farm owned by an investment conglomerate. A previous Nuffield scholar, Jim McCarthy manages the farm there in Botosani.”
From there, driving vans and navigating themselves, the scholars traversed the length of Romania and across Bulgaria. They made several stops at farms along the way including a newly built dairy farm, a mixed cropping farm and a large farm operating on an island in the middle of the Danube River.
The road trip ended in Sofia, Bulgaria, home to a million people.
Garey said, “From there we flew to Doha, capital of Qatar. We spent a week looking at agriculture in the desert. We spent time with ambassadors. We visited the fish market and the live animal market, anything you could imagine that was associated with agriculture.
“It was fascinating to be in the Middle East and in a country you don’t think of being involved in agriculture. They are very concerned there about food security. They’re trying to be more self-reliant.”
At the port in Doha, the group saw mostly imports brought in by huge grain ships. “They are trying to store enough grain to feed their population for two years,” Garey said. “A lot of animal feed is also being imported, as well as live animals.
“We visited a large dairy farm in Qatar that had a direct connection to Delaware. Some of the cattle had arrived there after being exported from the port of Wilmington. At one point in previous years I had the opportunity to watch one of the export ships being loaded in Wilmington with cattle and supplies.”
Six days later, it was off to Kenya for two weeks.
“Originally we were going to go to South Africa, but with the election, Nuffield wasn’t comfortable sending us there. It wasn’t safe politically,” Garey explained.
In the two weeks the scholars were in Kenya, they visited everything from dairy farms to potato and pineapple plantations to cut flower operations and research facilities for integrated pest management. Avocado farming is now bigger than coffee. Another new, profitable crop is macadamia nuts.
“It was much more diverse than expected,” Garey said. “We did not spend much time in Nairobi itself but traveled within a five- to six-hour radius of Nairobi including crossing the equator, visiting a cattle and ecotourism operation in Laikipia and overlooking the Great Rift Valley.”
Applications are open for the 2021 Nuffield International Farming Scholarships, and one of those is specifically for a farmer or agricultural professional who is a resident of Delmarva.
Originated by British automaker William Morris, Lord Nuffield, in 1947, the program promotes global learning and leadership in agriculture. Up to 75 ag leaders are selected annually for experience building through global travel and networking.
The Nuffield program offers an opportunity to widen one’s perspective. “You come away with a changed perception of agriculture in other parts of the world,” Garey explained.
“This experience really broadened my horizons. It showed me how important food security is to societies and how, despite climate and cultural differences, we are more alike within the agricultural sector than we are different.”
Garey has been to New Zealand, having led studies of animal science abroad, looking at livestock production and sustainable farm management.
Another highlight of the program, Garey said, was developing long-term relationships with others in her group. “We learned from each other as well as from the people we saw.” Garey said she was the only American among scholars from Canada, Brazil, Ireland, New Zealand and Australia. “They were of diverse backgrounds, different sectors of agriculture,” she added. With them she had some of her most valuable discussions.
Nuffield scholars follow up on their global travel experience by completing a minimum of eight weeks of self-organized travel focusing on their personally chosen research topic.
Garey said her travel was “hijacked a bit by COVID-19.” Her project looks at improving soil health through integrating livestock and grazing cover crops into farming systems.
“I’ve done some parts, but I was scheduled to leave March 17 for New Zealand and Australia, and New Zealand closed its borders just before the United States was locked down. Nuffield has told us no travel for the rest of the year. So my study is in limbo, as it that of the other scholar, Rose Danaher from Iowa.”
Danaher, an environmental specialist for the County Soil and Water Conservation District in Iowa County, Iowa, planned to do her individual study on water quality in Australia and New Zealand.
After the Iowa kick-off, her group traveled in June and July to Singapore, Indonesia, Japan, France and Canada.
Applications for the 2021 Nuffield program are due by Oct. 15, 2020. Interviews will take place in locations around the world in November.
Selected Nuffield International Scholars will be announced in December 2020, and the scholarship commences in 2021.
Approximately seven scholarships are available.
For more information, visit www.nuffieldinternational.org/scholarship.html.
Garey said she and Delaware’s other former scholar, Georgie Cartanza, Delaware Cooperative Extension state poultry agent, would be happy to talk with anyone considering applying for the program and assist them with the application process.
Garey can be reached at truehart@udel.edu or 302-730-4000.