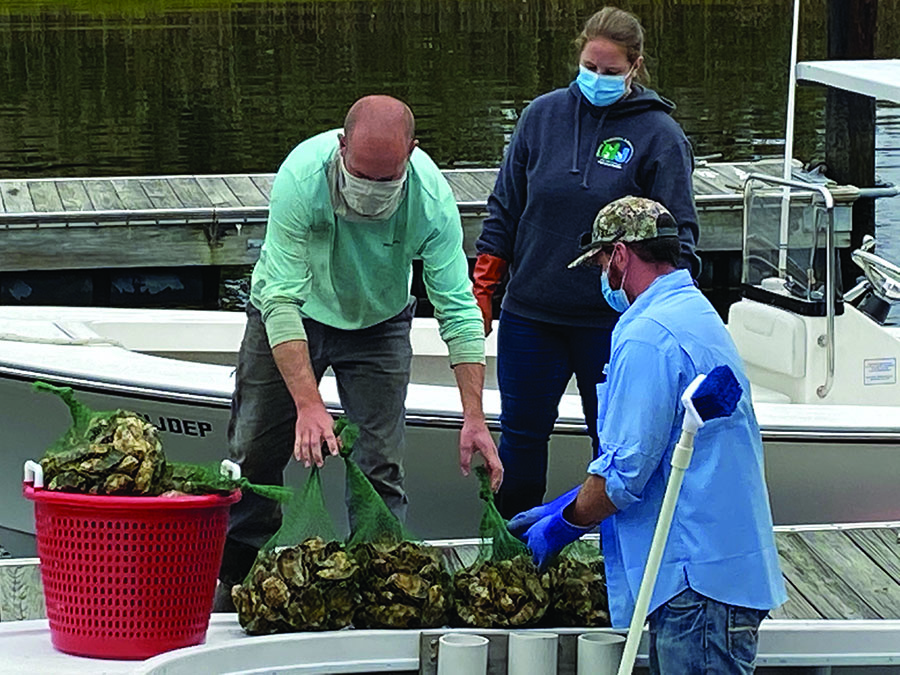 PORT NORRIS — With some quick grant writing and an equally quick disbursement of grant funding, about 20 of New Jersey’s Barnegat and Delaware Bay oyster farmers were saved from what could have been some serious financial hiccups last fall.
There are now about 30 such farmers in both bays and other coastal areas along the New Jersey coast all the way up to the Raritan Bay.
There were two oyster buyback projects, according to Lisa Calvo, marine scientist at Rutgers’ Haskin Shellfish Laboratory in Port Norris Calvo.
One was a Rutgers University project that Calvo spearheaded to buy back 76,000 mature oysters from farmers affected by the pandemic-related slowdown in the restaurant business.
Grant monies were received last fall and distributed equally to participating oyster farms, most clustered around the Delaware and Barnegat bays.
“The idea was to use them – once the market for restaurant oysters collapsed – for habitat building and restoration,” Calvo said, noting the program and a similar program funded by the Pew Charitable Trusts in several Mid-Atlantic states has been a “win-win.”
The Pew oyster buyback program was much larger, but the Rutgers program involved buying 76,000 oysters from 20 farms at $0.65 each.
Instead of being transported to restaurant freezers, the mature, 3-, 4- and 5-inch oysters were transplanted to oyster restoration sites in Little Egg Harbor and the Mullica River in the fall.
Helping the oyster farmers by buying some product for reef building at the same time was the idea behind both projects.
“Oysters harvested from Atlantic sites stayed there and Delaware Bay oysters stayed there, too,” Calvo said.
With oyster farms, she said, “there’s a lot of maintenance and structure involved. You have to grow them out in bags and cages and as they grow you’re constantly splitting out bags, some are ready to go to market, some are still maturing, so one bag of 200 oysters becomes two bags of 100 oysters each. Management at oyster farms is year-round.”
“They have a finite space and they take about two years to grow to maturity,” she said.
Farmers have costs for cages, state permits federal regulation permits and oyster bags, among other things.
Some farmers go out to their farms by boat while others trek into hip-deep water in the Delaware and Barnegat bays to check on and harvest their oysters.
“We knew how much money we had and divided it up among the participants that had ready oysters at the size we were looking for,” Calvo said. “We made it happen and the funding came from a grant from the NOAA [National Oceanic and Atmospheric Administration,] specifically for COVID relief projects relating to aquaculture. We submitted a proposal in May on very short notice and got funding in July.”
Calvo and south Jersey oyster farmers worked with the state Department of Environmental Protection, the Barnegat Bay Partnership and the Partnership for the Delaware Bay Estuary to pull it all together.
“Once it happened the idea was to get the money to the farmers as soon as possible, we understood the urgency. Spring is a really important time to be selling oysters to restaurants and it funds you through the summer,” she said.
“Some farms will sell oysters all year long but usually by the end of May, the restaurants are getting busier and demand is picking up for fresh oysters,” she said.
Given that all 76,000 mature oysters are now transplanted and anchored in their new locations, they are helping to build newer, bigger oyster reefs a lot more quickly than oyster reefs are normally grown out.
Oysters filter and clean huge amounts of water, improving the health of waterways for fin fish and other species.
“This is a new approach,” Calvo said of the mature oysters used in reef building, “usually what you’re doing is putting down shell cultches. This way the natural oysters are settling and creating a natural reef.”
Cultches are hard places the oysters can use to glue themselves down. Shells from dead oysters make great clutches.
“Sometimes you see oysters and mussels on dock pilings, it’s that same kind of thing. If these larvae are swimming in the water and they don’t find a hard surface to latch themselves onto, they won’t survive and grow to become mature oysters.”