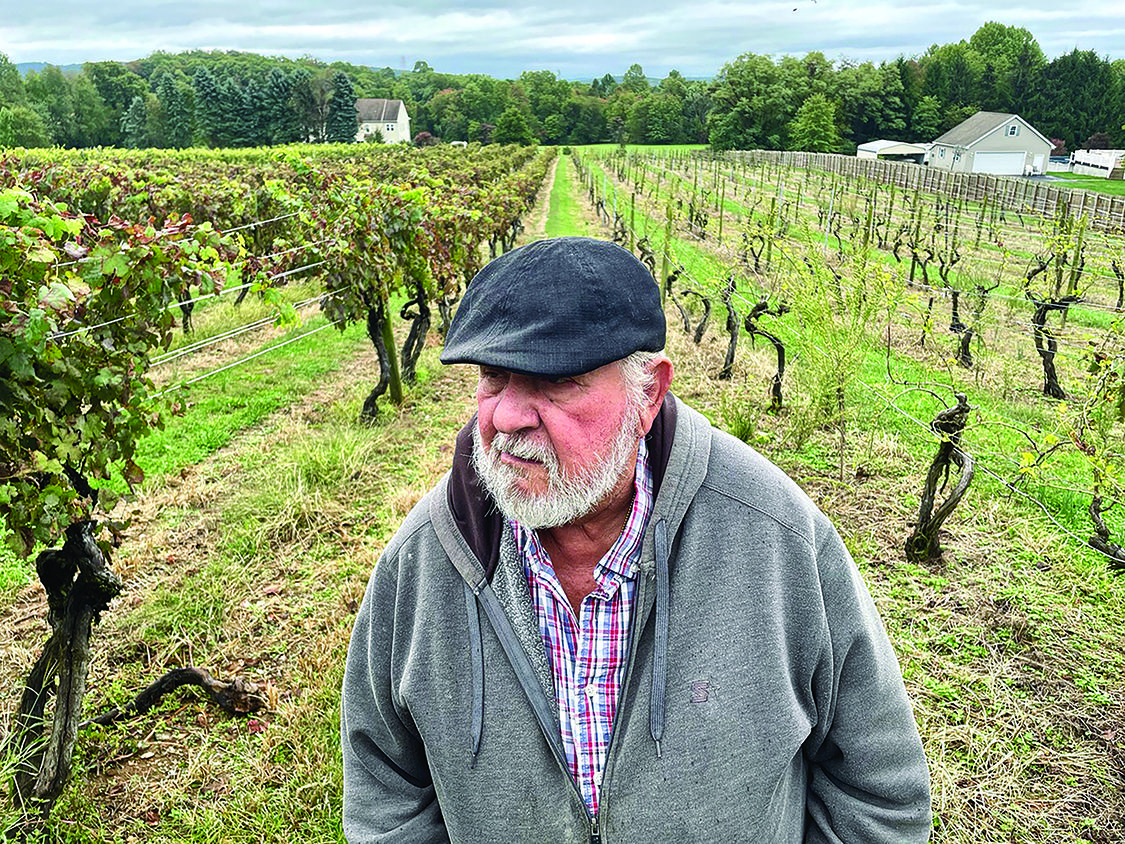 Mike Fiore, owner of Fiore Winery & Distillery in Harford County, Md., stands in front of a portion of his vineyard. To the right are several rows of grape vines decimated by a spotted lanternfly infestation this summer. The insects gradually moved from the outside of the vineyard inward. To the left are untouched vines he hopes to protect in the future. In the top photo, a pile of dead grape vines, torn from the ground after they were infested by spotted lanternflies. They’re also littered with lanternfly eggs, so Mike Fiore plans to burn them. He said he’s waiting for assistance from the local fire department. (Photos by Jonathan Cribbs)

PYLESVILLE, Md. — Mike Fiore frowned as he motored past a depressing heap of dead grape vines at the edge of his winery last week. He was eagerly awaiting the assistance of the local fire department to incinerate the tangled pile, eliminating not just the vines but the thousands of spotted lanternfly eggs attached to them.

It’s been a difficult two years at Fiore Winery & Distillery. He first noticed the invasive, sap-feeding insects on his vineyard, which occupies 12 sloping acres in Harford County, last year. This year, he was inundated, and the insect’s sudden embrace of his vineyard has been devastating. Fiore, born and raised in Italy, estimated he lost about three quarters of his grape production this year. Those grapes typically yield about 5,000 gallons of wine sold to customers at his facility and through local distributors.

“You feel (ticked), but that’s about it,” he said in a thick Calabrian accent as he laughed in his office. “Who are you going to take (your complaint) out to? I should send the bill to (Chinese President) Xi Jinping because they come from China.”

Fiore and other grape producers — mostly in the northern half of Maryland — are now contending with the colorful lanternfly as it settles in the state. It was first detected in Bucks County, Pa., in 2014.

“Our grapes are definitely taking a beating,” said Kelly Dudeck, chair of the Maryland Agricultural Commission, at the group’s Sept. 14 meeting.

The Maryland Department of Agriculture placed Harford and Cecil counties under quarantine in 2019, requiring that businesses moving goods or equipment outside of the quarantine zone acquire a state permit. Now 10 counties and Baltimore City are under quarantine to combat the rapidly spreading lanternfly, which has established itself across the Mid-Atlantic and parts of the Midwest.

The planthopper, native to Asia, arrived in the United States on a shipment of stone trucked to a location north of Reading, Pa. It feeds in large groups on a wide range of plants including grapes, peaches, apples, walnuts, oaks, and pines, according to the University of Maryland Extension. Now, regional vineyards are in the pest’s crosshairs.

“The first few years here, it was really daunting,” said Carl Helrich, owner of Allegro Winery in Stewartstown, Pa. “It’s not a very pleasant experience to be out in the vineyard picking grapes and have these things land on you, like, two times a minute.”

Fiore first noticed the insects last year, though they didn’t appear to exist in great numbers. He’s second-guessing that now after he lost roughly 1,500 vines of Cabernet Sauvignon this year. The lanternflies land on the vines in the late summer and fall to suck sap, draining the plant of energy it needs to stay healthy through the winter. The damage doesn’t reveal itself until the next growing season.

“What happens is the vine bud breaks late, and when the bud breaks, the production on that is really weak,” Fiore said. “You’re not going to get a nice bunch of grapes. You’re going to get a little, mangy group of grapes that you’d be better off throwing it away than using it to make your wine.”

The consequences could be devastating to crops. Penn State University recently projected that if lanternflies aren’t contained, they could cause $324 million in lost business in Pennsylvania each year and eliminate 2,800 jobs. When the insects first arrived in Pennsylvania and producers weren’t sure how to respond, the impact was dramatic, Helrich said. He recalled an entire 50-acre vineyard that was lost in 2016.

Charles Mewshaw, co-owner of BirchView Vineyard in Carroll County, Md., said he scours his wife’s car when she returns home from working in Pennsylvania each night to make sure lanternflies haven’t attached themselves to her vehicle — a common method of travel for the insect. He also walks the woods around his 10 acres of vines, searching for evidence of their arrival.

So far, so good, he said, but he suspects that could end soon. His operation produces about 30 tons of fruit each year, mostly for wineries across the state. Lanternflies could threaten that if they can’t be controlled, he said. Even with insurance, the cost to replant a large percentage of the vineyard would be too great.

“If we get massive destruction, we will probably have to reduce our vineyard to a hobby status,” he said.

Mewshaw sits on the board of the Maryland Wineries Association where producers discuss the spotted lanternfly frequently. The reported impact varies.

But the pests can be controlled with insecticides, Helrich said. Because the invasion originated in Pennsylvania, producers said Penn State has produced the best research, including management options depending on the severity, ranging from creating natural habitats for their predators such as spiders and birds to applying EPA-registered chemicals such as dinotefuran, bifenthrin and carbaryl. Helrich said he sprays in the fall.

“It just adds one more thing we have to do during harvest now, unfortunately,” he said.

Fiore found an organic insecticide and fungicide, PureCrop1, made from soybean oil that was effective against the insects, albeit too late this year. He’s ordering 25 gallons of it for the next growing season, and he expects to apply it every week starting in the spring.

“Where do we go from here?” he said. “That last thing I want is sympathy. I want a solution.”