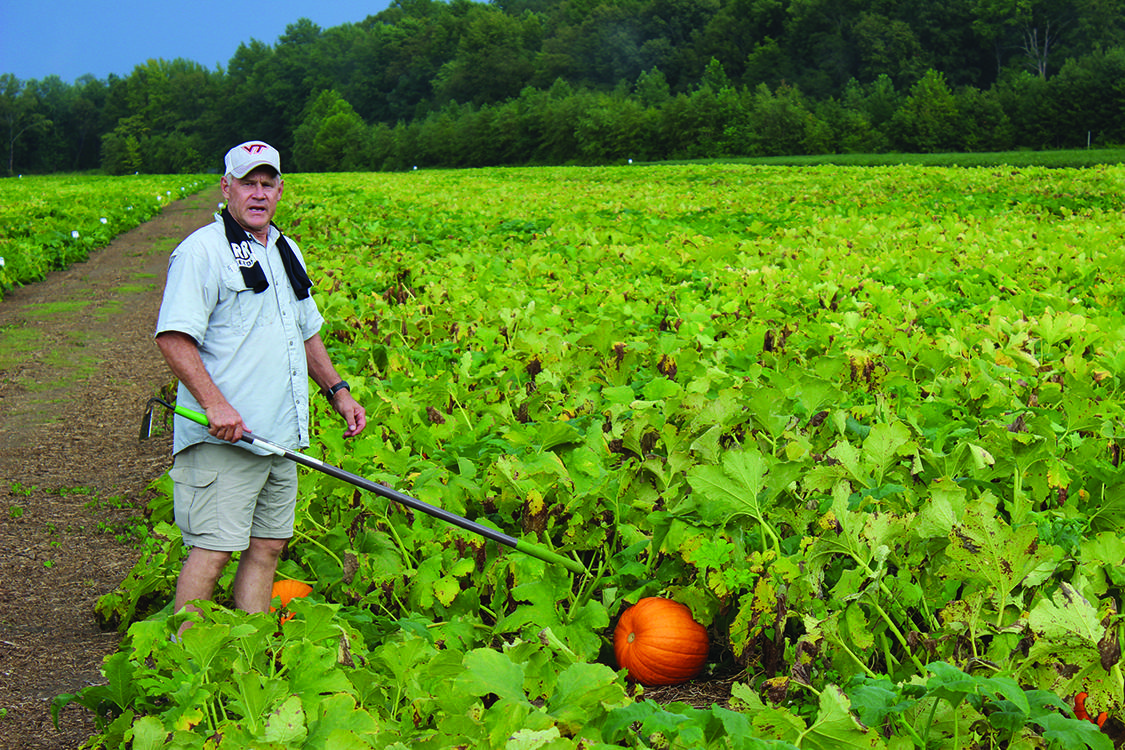 Looking to get a more consistent number of larger pumpkins out of his crop, Paul Davis tried different seed spacing in a test plot at his family’s farm, Davis Produce. He shared his observations during Harris Seeds’ Virginia Pumpkin Extravaganza field day held at his farm on Sept. 8. (Photo by Sean Clougherty)

LENEXA, Va. — Each year pumpkin grower Paul Davis needs pumpkins in the 25- to 30-pound range to fill specific wholesale orders.
The problem, however, is getting a consistent amount.
Growers in the mountain and valley areas of the state with different climate and soil type, can get more consistently larger sized fruit, Davis said, but not in his area of Eastern Virginia.
“You might as well subtract about a quarter of the weight for us,” he said. “We just can’t get as many of those size on our farm.”
That prompted Davis to trial different plant spacing in a test plot to see if it would help ensure a consistent number of larger pumpkins.
Working with Harris Seeds Davis trialed five varieties — two large, two medium and one small in typical size — planting 48-foot strips of each at two-, four-, six- and eight-foot spacing, with two replications each.
“It’s a question I get all the time,” said James Daley, pumpkin breeder for H.M. Clause, during Harris Seeds’ Virginia Pumpkin Extravaganza field day held at Davis’ farm on Sept. 8. “If I space the seed out, will I get larger fruit? Some growers swear by it.”
Both Davis and Daley said they expected the longer spacing to yield larger fruit, but data from this year is telling a different story. In the planting strip of Harris’ Kratos F1 variety, the two-foot spacing yielded more overall pumpkins, 15 per 48 feet, but they averaged closer to 20 pounds.
The eight-foot spacing produced larger pumpkins but only one-third the number of pumpkins as in the 2-foot spacing. The four- and six-foot spacing strips yielded 11 and 7 marketable pumpkins, respectively.
“It wasn’t what we thought would happen,” Davis said. “Between four and five feet (spacing) seemed to be the sweet spot for this year, for this pumpkin variety.”
Similar results came out of the strips of small size pumpkins, where Davis was interested in seeing what spacing would produce the most pumpkins, rather than increasing size. Growing the Field Trip variety, Davis said the two-foot spacing yielded about 30 pumpkins, 40 for the four-foot spacing, 35 for the six-foot spacing and 20 for the eight-foot spacing.
“The plant acted like a weed,” he said of the high-density strip. “It was too competitive.” On the opposite end, the low-density strip just didn’t have enough plants to make a higher yield, he said.
Davis added one year of a trial isn’t enough for a firm conclusion but it supports his assertion that the variety’s genetics plays more of a roll in what the plant will produce.
“I think genetics has more to do with it than the spacing — with fertility and adequate rainfall.
“The bottom line for me is allow the genetics to do what they’re supposed to do and until you find otherwise, follow the recommendations in the seed book.”
Daley encouraged field day attendees to experiment with plant densities on a small scale.
“See if it helps you,” he said.