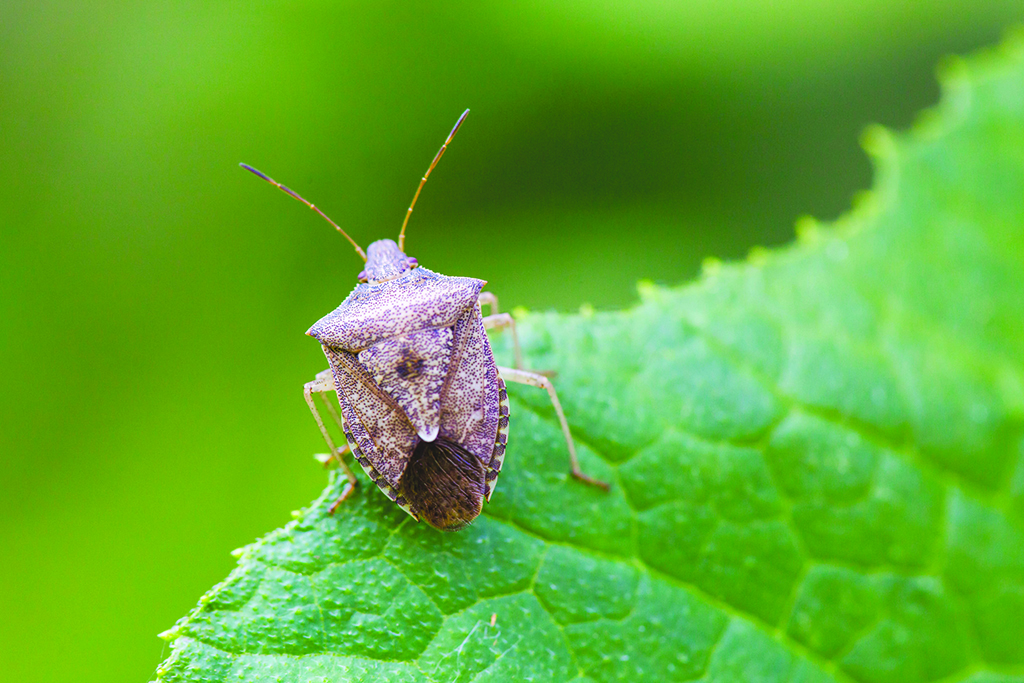 The strong-flying brown marmorated stink bug uses its needlelike mouth parts to feed on fruit such as peaches and apples, causing them to expand more slowly at the point of puncture. (Photo courtesy Melissa McMasters)

Farmers are no stranger to infections among their fields.
Diseases largely contained to crops can spread quickly among them, and pests can eat entire plantings down to the roots.
Good farmers know they must get to the source of the problem in order to determine an effective treatment: Dark brown spots on produce tend to signal excess water and rain while falling and wilting in plants suggests humidity, produce farmer Tammy Adkins of Salisbury, Md., said.
Managing the problem, regardless of its source, involves doing so safely before it spreads.
Where 2018 brought such excessively wet weather that kept farmers from accessing crops to spray fungicides or harvest what they could and soggy soybean exports piled up, growers such as Hail Bennett contend that pests have become problematic.
The Frankford, Del., farmer said his peaches and blueberries have been especially affected by the brown marmorated stink bug and the spotted-wing Drosophila, or SWD.
The pests are non-native, originating in Asia and making their way to North American crops during the past five to 10 years, Bennett said.
The University of Florida calls the marmorated stink bug a “major pest of tree fruits and vegetables” and cited a report that it causes “millions of dollars’ worth of crop damage and control costs each year.”
The SWD is considered a concern particularly along the coast, because it prefers the mild, humid weather that tends to dominate the region, according to the University of California.
The pest favors soft-skinned fruits that in addition to blueberries include strawberries, blackberries, cherries and raspberries.
Bennett, like other farmers, said he suspects that pests such as these arrive in shipping containers.
The strong-flying stink bug uses its needlelike mouth parts to feed on fruit such as peaches and apples, causing them to expand more slowly at the point of puncture. The SWD lays eggs that hatch out and destroy the blueberries.
Growers have discovered ways to control the brown marmorated stinkbug and adapt, Bennett said. He has on the other hand lost a portion of a crop to the SWD and has worked with the University of Delaware Extension on testing a method for controlling the pest that involves using the parasitic samurai wasp that hatches from the brown marmorated stink bug’s larvae to prey on it.
Bennett said that he for now uses sticky traps to attract both SWDs and stinkbugs. The traps maintain a threshold in that they can only handle a certain number of pests so they help him to monitor pest populations rather than  keep them off the plants.
Bennett at the same time tries to minimize the use of pesticides, he said.
“There are a lot of challenges that require the use of pesticides, but trying to do it sustainably is the big thing,” Bennett said. “It’s also less expensive.”
Bennett said he keeps his peach orchard well-mowed so that the stink bug doesn’t have any place to hide and reproduce. Because the SWD tends to inhabit the lower and denser part of the blueberry plant that doesn’t access a lot of sunlight, he keeps the plants pruned, he said.
Bennett said he rotates pesticides as he does weed killers. The rotations prevent him from killing beneficial insects that feed on aphids, or small, soft-bodied insects that reproduce fast and feed on just about everything.
The peach and blueberry grower likewise rotates his chemical treatments of bacterial spot that develops in peaches when they become exposed to excess water and humidity. In this instance, he said, the rotation  prevents the the plants from developing a resistance to any one chemical.
Because too many chemicals can damage trees, Bennett said that he includes within that rotation what he calls a “relatively safe, very common” copper treatment.
Adkins said she combines the use of pesticide spray with picking fruits daily and, when picking, looking into the blossom for pests such as stink bugs.
The pests favor zucchini flowers and have claimed an entire staggard crop of 200 of the vegetables at her farm, she said.
Adkins’s husband, Gaylon, handles the pesticides, she said. To do so, he must secure different licenses for different types of treatments.
He begins by checking the website for the local extension to see which classes the organization is offering and then signing up for those that interest him, she said.
“It’s not feasible with so many acres to be organic,”Adkins said. “He’d have to be a lot more diligent. He doesn’t have the time to compost rather than fertilize or to go in there and pull weeds himself.”
Some times are easier than others to see a symptom and know the source, Bennett admitted, noting that he uses only products such as those that contain glyphosate and have the approval of his customers and the Environmental Protection Agency.
Fruits that are gnarled to the point of “catfacing,” or appearing like felines, can for example be the result of the brown marmorated stink bug. The deformities can also be caused by hailstorms, freezing nights or native stinkbugs, Bennett said.
Catfaced fruits “don’t taste bad,” he said. “They’re not unhealthy. They just look bad – and if it shows up at harvest, there’s nothing you can do.”